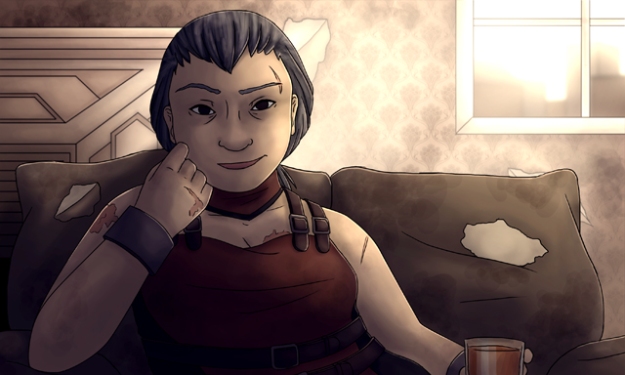 The look on Quin’s face was rather irritating.

She propped her chin in her hand, gazed across her desk at Fiearius and simply smirked at him. She’d been sitting like that in absolute silence for minutes now, until finally, she said, “Sorry, sweetie, I just can’t believe you signed up with Carthis.”

“Yeah, well, neither can I,” Fiearius muttered, leaning back on the couch and taking a long sip from the glass of whiskey she’d offered and he’d immediately accepted. Glancing to his side, he added bitterly, “Already starting to regret it.”

It wasn’t just that Carthians held imperialist values that stood apart from everything he’d ever known, nor his many years of bred resentment against them on Satieri. It was that, apparently, despite begging for his help in their oncoming attacks, they didn’t trust him. Despite his many protests that he could handle a meeting with Quinida Utada on his own, Admiral Gates had insisted that a representative ‘more versed in the official Carthian military rhetoric’ accompany him.

So he’d sent Leta. Of all people.

She sat beside him on the couch, her arms folded, her legs crossed over her knee. Cool tension emanated from her as she regarded Quin, who mused, “So you’re here to convince me to join in the fun as well? Let’s hear it.”

An expectant silence followed. Fiearius knew it was his turn to speak, but instead, he looked innocently over to Leta. If Gates had insisted she come along on this meeting for her ‘rhetoric’, he was going to damn well make sure she demonstrated it.

“Fine, I’ll do the talking,” said Leta waspishly, and Fiearius beamed at her.

“I’d just get it all wrong anyway…” he pointed out.

To Quin, Leta said, “Well. As you know, Carthis has been battling the Society for lost territory for some time now. But they’ve gained a lot of ground thanks to what — well, what we’ve been doing. They’ve decided to take the offensive. They’re planning an assault on Vescent, to liberate the planet from the Society’s control. But if things go well, and with the right people on our side, we believe it will, that won’t be the end of it. From there, there are plans to liberate more planets and wear down the Society, breaking their hold on the Span entirely. But it starts here with Vescent and we need your help.”

Quin listened intently as Leta spoke. She nodded thoughtfully. And when Leta finished, she went quiet, regarding her with a kind of curiosity Fiearius had seen many times before. And then finally she said, “So what’s in it for me?”

Leta’s face blanked. “Well. If things go as planned? Freedom for Archeti from the Society.”

Fiearius let out a snort. Leta turned her glare on him.

“Is something funny?” she said sharply, and Fiearius took a moment to absorb her familiar expression: arrogant, irritated and surveying him like he was something stuck to the bottom of her shoe.

He’d rather missed that look.

“Oh no, nothing at all,” Fiearius muttered, grinning. “I just thought I taught you better than this.”

“I’ve never learned anything useful from you.”

Fiearius opened his mouth to retort, but Quin spoke over him, “Alright, the bickering is adorable, but work that out in your own bed on your own time please.”

Startled, both he and Leta went quiet.

Leaning forward, Quin eyed Leta in particular. “Now. Freedom, you say. Freedom’s a nice notion and all. I’m all for that. And tell ya what, you lot done right by me plenty times over. Were it my place, I’d help ya out, truly I would. But it ain’t my place. You’re askin’ me to call back my people and tell ‘em they gotta go risk their ships, their crews, their lives for somethin’ that ain’t no more than an idea. You want our allegiance, you’re gonna have to offer somethin’ a little more…quantifiable. If you know what I mean.”

Leta did not look surprised. “Payment,” she guessed.

“Of some sort,” Quin confirmed. “I’m sure your budget’s going straight to the effort, but I’m willing to be flexible.”

“What’re you asking for?”

“Well what you can give me?”

Suddenly tuning back into the conversation, Fiearius leaned forward and regarded her incredulously. “Are you telling me they piled me with a babysitter that ain’t even qualified to negotiate?”

“Stop calling me that.”

Leta turned back to Quin. “The military is prepared to pay you but I can’t tell you how much. I don’t work for Carthis.”

“These days you’re sure acting like you do,” Fiearius put in, but Leta ignored him.

“I can help get someone in touch with her about compensation.”

Quin frowned with interest. “Tell me, who’s in charge of this whole operation?”

“That would be Admiral Gates.”

“Gates, huh?” Quin repeated, rolling the name over in her mouth. She sat back and looked up at the ceiling thoughtfully. “Good man?”

“I’d like to meet this fellow then,” she said simply. “Work out an arrangement face to face.”

“We hitched a ride here on the Beacon,” Fiearius explained, “It’s scheduled to drop us back off at the station tomorrow morning.”

“Well then.” Quin grinned and dropped her palms on her desk. “I’d best pack my things.”