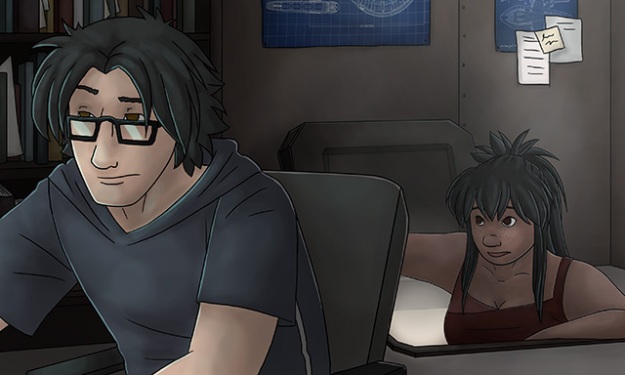 It was not a conversation Corra wanted to have, but it had to be done. She had to do it, no matter how badly it hurt. She had to. With heavy dread sitting on her shoulders, she knocked on the hatch to Cyrus’ room and slowly tilted it open.

Across the room, Cyrus was hunched over a screen, and she found herself staring at the back of his neck for a few seconds before saying, “Hey. You busy?”

He seemed rather involved in whatever it was he was doing and Cyrus was not the kind of man who enjoyed being interrupted. But to her surprise, Cyrus spun around in his chair and actually smiled at her, a sight that actually made her heart lift. She couldn’t remember the last time she’d seen the overworked and overtired Dionysian’s temporary captain in a cheerful mood.

“Nah, just doing a bit of freelance,” he explained shortly, gesturing at the console before him which displayed the blueprint of a ship she did not recognize. For the moment, she forgot her troubles.

“Freelance?” Corra asked curiously, taking a few steps towards him and peering closer at the ship’s document. There were annotations all over it in what she recognized as Cyrus’ handwriting.

“Fuel efficiency consultation,” he clarified. “I put out an ad a while back offering the service. Someone finally took me up on it. And then someone else. And someone else. Now I’m getting four or five requests a day. It’s bringing in some good money for just looking at designs and offering improvements. We’ll be back on our feet in no time at this rate.”

“So that’s what you’ve been doing locked up here for the past few weeks,” Corra laughed. “We were worried you’d gone mad like your brother.” She realized only a second later that perhaps that wasn’t the most sensitive remark to make, but Cyrus just chuckled in agreement.

“No, though I’ve had some of my clients call me mad,” he remarked. And then, with an air of pride, he noted, “‘Til they did the math themselves of course … “

Corra couldn’t help but beam back at him. After the Baltimore, there was rarely much joy around the ship anymore and especially not around Cyrus who seemed to be bearing the crux of all their misery. But right now, he seemed genuinely proud. And peaceful.

It made her feel a little more brave about what she’d come here to do.

“So,” she began, taking a step backwards and awkwardly tucking her hands behind her back. “You done any of this ‘consultation’ stuff for the Beacon?”

Cyrus cocked his head at her, curious. “Have I looked into improving her fuel flow system, you mean?” He shook his head. “Not really. She runs alright. I didn’t see any blatant discrepancies.”

Corra nodded, though she had little idea and little care for what he was saying. She had always respected Cyrus’ brains and talent for what he did, but it didn’t mean she ever had any interest in it. The ship’s technical outlook wasn’t really what she was asking anyway.

“So…” she went on, mustering her courage again as much as she could, “do you think you’ll be taking the Beacon, when Fiearius is better?”

Cyrus looked surprised, and then he frowned. “Fly the Beacon instead of the Dionysian? Don’t get me wrong, she’s an incredible ship, but…have you met my brother?” He chuckled and shook his head. “I think he’d die before letting go of this piece of shit.” He gestured up at the Dionysian’s rusting walls around him. “And, it pains me to say it, but her size probably makes her better for our line of work anyway. So the Dionysian it is.”

Corra nodded again. But despite her fears, she took in a deep breath and asked, “What’s going to happen to her then?”

“Eh, haven’t really thought about it,” Cyrus remarked with another shrug, turning back to his console for a moment and saying nothing more.

Well that was unhelpful, Corra thought. For such a genius, he certainly was having a hard time catching her drift in this conversation. Unless he had caught her drift and he was just ignoring it. Of course Corra knew that Cyrus wouldn’t be all that pleased to hear she was actually legitimately thinking what she was thinking, but–

“You want her,” he realized suddenly, the words falling from his mouth in realization as he turned to face her, looking shocked. His stare made a shiver run down Corra’s spine and she was sure she turned red in embarrassment. “You said you wanted a ship. There’s a ship…You want to take the Beacon.”

She gave a sheepish shrug and found she couldn’t meet his eyes.  “Well…if it’s that or abandon her,” she muttered awkwardly.

But what was she so ashamed of anyway? She was just asking for something that nobody else wanted. She was providing a solution to a problem. She was making an entirely reasonable request.

So why, when she looked at Cyrus’ shocked face, did she feel like she was ripping out his heart and stomping on it?

“It’s not like I don’t love the Dionysian,” she assured him quickly. “I adore her and her crew and these years have been incredible. I owe so much to you and to Fiear and Leta and everybody, but…I just think…it’s time…”

Briefly, he met her stare, but at once tore them away. “Right, of course,” he agreed, his tone indifferent and mechanic. “That makes sense.”

Corra watched him, trying to gauge his reaction. She was about to speak again, but he cut her off.

“I’ll need to do another pass on her engine,” he remarked briskly, turning back to the console and pulling up another set of blueprints, all business. “There may have been damage from our escape stunt that I missed. I’d like to replace the sub-core stabilizers, they’re old and starting to get brittle. They’re not that expensive, I can probably find some downtown.”

“Oh — okay.” Corra could think of nothing to say.

“I mended the hull damage, it was minor, but I just did a patch job,” he went on. “It’ll last, but you’ll need to have it properly redone within the next year. As for your auxiliary weaponry, it’s not my specialty. You’ll have to find someone else to fix it.”

“Oh and she can manage with a few hands for short jaunts, but if you’re going to be flying her consistently, you’ll need to get a crew. A big crew. You’ll need at least three, ideally six, engineers on hand at all times for the main core alone. You’ll need a lead pilot and a few secondaries if you can afford it. Someone to man the navigation. I’d recommend an electrical expert. And don’t even get me started on pure maintenance staff for a ship that size.”

“Don’t hire anyone that doesn’t know the difference between a 450V and a 450X. Don’t accept credits from anyone who won’t give you their routing CID. Don’t trust anyone with a fake hand.”

“I–I haven’t really figured it out yet.”

Finally, she stepped forward and put her hands on his shoulders, stopping him in place. He stared up at her with the saddest eyes she’d ever seen on him.

“You really wanna leave?” he asked, his voice barely more than a whisper.

She practically felt her heart crack. Corra threw her arms around him and tugged him close to her and whispered back, “I gotta, Cy-cy. If I don’t, I’ll always regret it. I can’t just sit around waiting for life to happen, I gotta go take it.” A silence fell between them until she finally said, “You can come with me if you want.”

Cyrus let out a pathetic one-note laugh and mumbled against her shoulder, “You know I can’t.”

“Well you could,” she amended, pulling back and wiping her eyes. She tilted her head and smiled sweetly. “If you really wanted to.”

Cyrus smiled back at her weakly and then scoffed. “Yeah if I didn’t care about my brother getting himself killed the next day.”

“And now I’ll have to worry about you too,” he muttered, his voice lowering with doubt.

“You don’t have to worry about me,” she assured him, reaching out again and holding his shoulder.  “I can take care of myself. I’ll figure it out. I learned a lot about running ships from being here, y’know.” She paused for a moment and smirked mischievously. “Mostly what not to do.”

Cyrus snorted once and shook his head. He said nothing. Slowly, Corra moved closer, placing her other palm on the plane of his back and sliding it forward until she was hugging him from behind, leaning her head against his shoulder.

Finally, he took in a deep breath and whispered, “I’m gonna miss you.”

“You’ll be okay,” she assured him, feeling her voice crack as it passed her shaky throat. “We’ll still talk all the time and we’ll see each other a lot and you’ll be so okay without me. Just look at you, running this whole ship through all this disaster, yeah? You’ve come so far since we first met, y’know? You’ve changed so much.”

“And you haven’t changed at all,” he muttered kindly, taking her hand in his and squeezing it. “Don’t,” he added quietly with a smile. “Don’t ever.”