Finn could hardly believe the readings on the console screen. The efficiency grade, the fuel storage, the surveillance capabilities — this ship was unlike any other he’d flown before. He felt like he had actual hearts in his eyes.

It was no wonder, then, he hadn’t left the Beacon’s bridge all afternoon. The more time he spent here, scrolling through her diagnostics, examining the field of controls, the more he felt like he was falling in love with a beautiful, exotic woman. Who just happened to be outfitted with some of the best long-range weaponry he’d ever seen.

Vaguely he heard the bridge door glide open behind him, but he didn’t look up from his spot in the pilot’s chair. As it turned out, it was Corra, who approached his side and greeted, “Hey, Riley,” over his shoulder.

“Hi. You know, with a little mech tinkering, this beast could be the fastest of its kind?” he said reply, swiping his hand across the screen to show her. “See this? She’s completely unmatched in premium fuel and speed standards.”

Corra paused to stare at the screen, then she glanced toward Finn. “Okay….” she muttered patiently.

“I’m serious, just look at these readings I’m getting, I’ve never seen anything like it,” he went on as she lowered into the co-pilot’s chair, crossing her legs and gripping her ankles as she leaned forward. Finn couldn’t help but notice there was an excited light in her eyes, though he didn’t think it was due to the Beacon’s cloaking ability, for some reason.

“Great,” she breathed suddenly. “So hey, remember that night on Paraven?”

At last, his attention was captured. He turned his chair toward her, a devilish grin spreading over his face. “You mean with the tequila and the moonlight? Oh I remember.”

“Oh shut up, not that part,” she grumbled, rolling her eyes. “The other part. Before. When we were talking. About ships.”

“Vaguely?!” she demanded indignantly. “I bare hopes and dreams to you and all you can remember is making out on the beach? Typical.”

“Hey, I remember a little,” Finn defended, scratching his hair. “You were talking about leaving the Dionysian.”

“Oh there ya go,” she remarked, looking mildly impressed.

“Something about you wanting a ship of your own. Having adventures on your own bird … “

“Right, and?” she prompted.

A long stretch of silence sat between them. Finn gazed at her blankly.

“Close enough,” she declared, and then she bounced up in her seat. “Well guess what!”

“You — ah — did it?” Finn guessed, startled. “Got a ship?” Then he narrowed his eyes as realization hit him hard. “Wait. This ship?”

Finn stared as she danced in a circle of joy around him. He felt she was missing a rather important puzzle piece here. Dryly, he muttered, “‘Nobody else’ wants it huh?”

Corra, mid-bounce, stopped and flung her hands back to her sides.

“Oh don’t look at me like that,” she ordered shortly. “I haven’t forgotten about you. And I’ve got no intention of prying you out of here.” With a wide grin spreading across her face, she casually stepped around behind his seat and put her hands on his shoulders. “In fact,” she went on, leaning down to speak into his ear. “I was just thinking how much I could use a pilot.”

Finn lifted his eyebrows with intrigue. “A pilot? And here I thought you learned to fly her overnight.” He paused, and added casually, “So … you got someone in mind?” 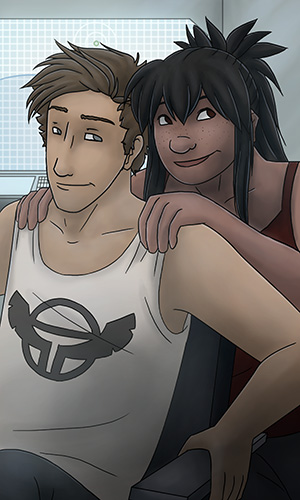 “Maybe,” she cooed, leaning her elbow on his shoulder and her head in her hand. Dreamily, each word soaked in sugar, she went on, “There’s a candidate I’m looking at that knows so much about her already and about ships in general and would be such a great asset to my crew, I’d really love it if he’d join me.”

Finn wrinkled his forehead, feigning confusion. If Corra was going to bait him, then he was going to play dumb.

“Wait, who is this guy?” he asked suspiciously. “And what makes you think he wants to pilot for you, eh?”

She blanched and said bluntly, “Because his alternative is to go back to an aging decrepit rust bucket that can’t even reach a decent cruising altitude without nearly exploding?”

Well, it was hard to argue with that kind of logic.

“Fair point,” he admitted, turning to face her. “So is this a real offer? An official offer? ‘Cause you’re gonna have to ask me all official-like, you know.”

Corra sighed, rolling her eyes as she drew herself up importantly. “Finnegan Riley, will you please come with me and be the Beacon’s official pilot?”

“Of course I will, why didn’t you say so?” he said at once, grinning at her. He leaned back in his chair and slid his hands behind his neck. “I’ll accept. With a few terms.”

“Term one,” said Finn briskly, “I want a say in the crew we bring aboard. The Beacon will need about 100 hands, y’know.”

“Term two. I’m not signin’ a contract of any kind. Nothing that says I can’t leave. I can bail at any second. Alright? But,” he added, lifting his hand, “I do promise to land the bird before I ever do that.”

“And finally. Let’s discuss our titles.”

Corra barely blinked before she said, “I’m the captain.”

“You — what?” Finn laughed, but he was not joking when he said, “You mean co-captain. Seeing as you can’t fly it without me, ma’am, I’ve got just as much right to this ship as you do.”

“You do not.” Corra gaped at him. “If you wanted it so bad, you should have done something about it. I did. So I’m the captain. You.” She prodded him in the chest. “Are the pilot.”

Finn scoffed in disbelief. “Not only the pilot. Co-captain.”

“Fine,” she relented, rolling her eyes to the ceiling. “Lead pilot.”

Corra was stumped for a moment, but only a moment. “Sub-captain!”

“Fine.” Corra crossed her arms over her chest. “Fine…You can be … “ But then she trailed off and grumbled nonsense under her breath, averting her eyes to the side.

Corra groaned. “You can be co-captain,” she said again, her voice both loud and bitter. Finn beamed.

“Well ya don’t hafta shout. And thank you kindly.” He threw out his hand to shake hers, which she did begrudgingly. But still, he could see a small smirk growing on her face.

“We oughta celebrate,” he decided, jumping to his feet as he looked around the bridge with newfound love in his eyes. “Drinks?”

Fortunately, Finn knew just where to look. The captain’s quarters, which he’d taken the liberty of exploring for himself, boasted an impressive bar. A few minutes later, he returned into the bridge, swinging a green champagne bottle at his side.

“To the Beacon,” he said, filling not a champagne flute, but a coffee mug – it was the only glass he could find quickly – and passing it over to Corra. He poured another for himself and tilted the mug against hers. “Cheers, cap’n.”

“Cheers,” said Corra, grinning brightly as she took her sip — but then she added, under her breath, “Pilot.”