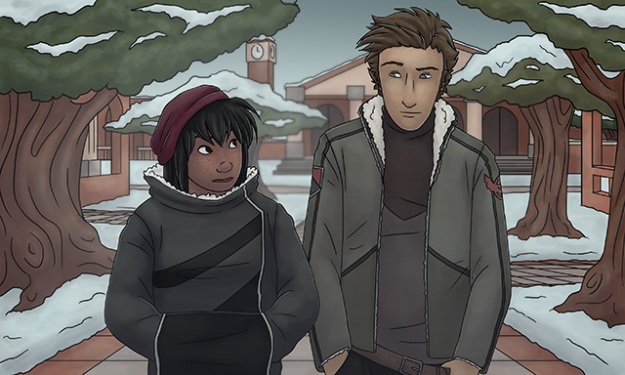 Carthis was the coldest place Corra had ever visited. Slick ice covered the paths, tree branches sagged under the weight of snow, and icy wind nipped her hands, which she hastily stuffed in her pockets as she walked beside Finn away from the rehab center.

Worry sat in her chest, like a lead weight. Ren had gone quietly and agreeably when they checked him into the center last night. He hadn’t said a word until the very end, when he turned to Corra and thanked her softly. Then he added, “Will you tell her I’m sorry, please?”

And just like that, he was gone: the officer shook hands with Finn, then with Corra, and promised constant updates on Ren’s condition. They said they could visit as often as they liked. Now, hours later, Corra was quiet and restless on the walk back to the Beacon. She kept close to Finn, purposely letting him block the wind for her.

“Do you think he’ll be okay?” she mumbled at last. Finn slid her a look of understanding.

“I know. But that girl, she bounces back.” He paused. “And she’s also lucky. She has really good friends.”

Corra managed a smile, but then, she felt Finn slow to a halt at her side. He was suddenly transfixed on the handsome iron gates that led into Carthis’ main military campus. He looked almost lovesick. And of course he did: this was his old home, where he used to live and go to school. They’d been here all night, but she’d almost forgotten until now.

And suddenly, despite their lack of sleep and the grim occasion that brought them here, a look of mischief appeared in his eyes. “Hey,” he said suddenly, starting to grin. “There’s no need to go back just yet. Don’t supposed you’d fancy a tour?” Before she could answer he started toward the gates.

For a moment, Corra just stared at his back,  dumbfounded, but realizing she had little choice, she eventually rolled her eyes and followed.

“See this fountain?” he yelled, joy lifting his voice as he hopped onto the stone ledge. “Fell off it my second year of school when I was real drunk — cracked my forehead right open, needed twenty staples,” he added, beaming with pride.

“Not sure that’s something to be proud of, though it certainly explains a lot,” Corra snorted. He seemed to be eagerly awaiting her approval to continue. She wasn’t exactly in the mood for a tour, but it was impossible to ignore the excitement lighting his eyes.

Besides, the military campus was quite beautiful. Evergreen trees, sloped snowy hills, old brick buildings — like a Concordia holiday card.

“Alright, fine,” she muttered. “What’s this over here then?”

Finn jumped down from the fountain, suddenly as excited as a puppy let out to play. “That’s the main study lounge over there,” he said, pointing. “Didn’t spend all that much time there really.”

“Down here’s the fitness center, and the museum — “ He strode ahead, apparently immune to the cold. She followed as he loped along.

“So you were recruited when you were still on Archeti, right?” she recalled. “How long were you here for?”

“Three and a half years,” he replied, crossing through a snowy courtyard. “Left right before graduation.”

Even for someone with no formal education, that struck Corra as odd. “Why?”

“This is the rec lounge over here,” said Finn, pointing with both hands. Then he slowed in the shadow of a tall gray tower. “And here! This was my dorm for two years! Aw, the nights I spent in here … “

“You can skip that part, thanks,” she muttered, grimacing as she, too, stopped to admire the building. Then she looked at him more sternly. “But you didn’t answer my question.”

“What question? I wonder if any of these buildings are unlocked,” he muttered to himself, wandering away from the dormitory and starting down the path again. “The hangars are just over here — “’

But Corra didn’t follow. “Why’d you leave?” she called after him. “If you had such a great time here…Why’d you just up and leave without graduating?”

He walked ahead and threw a look at her over his shoulder, his eyes narrowed and amused. “I guess you could say I was unpopular in some circles. Not everyone finds me as charming as you do, Corra.”

“So you didn’t graduate,” Corra went on, ignoring his antics, “And you’re not part of the military any longer. Why were they willing to help you? Why did they let Ren use their facilities?”

“‘Cause I asked real nicely?” He grinned. But then the grin faded off his face and he actually looked a touch uneasy. “Nah, I have an old…uh, lady friend who still works here, she got Ren through the doors.”

“Lady friend?” Corra repeated, suddenly jogging a few steps to catch up to him. “What kinda lady friend? Who is she?”

Finn eyed her uncertainly, as if deciding whether or not to share this information. At long last, he admitted, “Her name’s Elsa. We dated awhile in school, didn’t really work out when I left.”

Finn looked unsure if he should have been amused or irritated. “You’re pretty nosy you know that?” he muttered. “I don’t know — lots of reasons. She didn’t wanna do long distance, for one. That enough explanation for ya or what?”

“Not really,” Corra said bluntly. “So are ya gonna see her while you’re here?”

He winced, though he didn’t look particularly upset. “Ah, probably. Seems inevitable, doesn’t it? Now c’mere, this is the best part of the whole place.”

Finn walked ahead and pulled open the arched double-doors of one of the longest, tallest buildings Corra had ever seen. She followed him inside and at once she realized why Finn liked this place so much: stretched out on the concrete floor for nearly a mile were glinting, polished ships of all shapes and sizes, parked in neat rows, their enormous hulls spread over their heads.

Finn let out a tremendous, loving sigh. “Ain’t they beautiful?”

As little as she knew of ships, she had to admit the sight was impressive. She followed as he began to wander into the hangar, which was mostly empty of people, save for a few officers cleaning the ships, who fortunately paid them little mind.

“So you were training to be a pilot, right?” asked Corra, watching as Finn dragged his hand along the exterior panel of a ship, admiring it from every angle.

“Yep. Of the Class-A 750s.” He must have interpreted her silence correctly because he added, “The small fast ones that shoot. Like that.” He pointed toward a row of sleek ships in jet black, even smaller than the Dionysian; they looked like they fit one or two people.

“So that’s where all that fancy flying with the Beacon came from then?” she mused. “I heard you were really somethin’ during that escape.”

“Oh yeah? Who said that?” He suddenly beamed in a devilish sort of way. “It was Leta, wasn’t it?”

“No, it was Cyrus,” she corrected at once, rolling her eyes. “You leave Leta alone. She’s had a hell of a time the past month, she doesn’t need you bugging her too.” She crossed her arms. “Besides, the cap’n’ll get all jealous.”

“Oh yeah?” Finn laughed, looking back at her over his shoulder. “Knew he had a soft spot for our dear doctor.”

“Who doesn’t know at this point?” she muttered under her breath. “The way he makes those eyes at her? You know the ones. Haven’t seen him look at something like that since Cy bought him some fancy Satieran cheese for his birthday two years ago. That is the face of sheer adoration is what that is. Though it’ll be a fine day in Genisi before he’ll admit it.”

Finn snorted a laugh. “So it’s that obvious huh.”

“Obvious as a black ship in clear skies,” Corra confirmed as she gazed distantly at one of the great metal beasts at the opposite end of the hangar. It stirred something in her, and after a moment, she asked suddenly, “Speakin’ of ships. What do you think’s gonna happen to the Beacon?”

“Well technically it’s a stolen ship,” she explained. “So now it doesn’t really belong to anyone. Eventually Fiear’s gonna get better and take off on the Dionysian, so what happens to the Beacon?”

“Good point.” Finn arched his eyebrows in consideration. “Guess she’s a rogue vessel at the moment. Well I tell ya what — ” He grinned, but he was not quite kidding when he said, “whoever ends up takin’ her is gonna to have to pry her out of my hands.”