Dripping water hollows out stone — not through force, but through persistence.

Fiearius stared at the words on the wrinkled page, completely unsure what he had just read. So he read them again. And once more. Still, nothing.

Fiearius had confessed to his brother the day before that he’d been having trouble focusing and staying in the present moment. Time was slipping away from him. His surroundings made little sense.

Cyrus hadn’t been able to conjure a real solution to the problem, but he had handed him a small red book entitled The Little Book of Ancient Wisdom. “Maybe you just need something to exercise your mind,” he’d suggested. “This should do it.”

So far, Fiearius had managed to get through about twenty pages of quotes from authors long dead and the only thing it had done was make him feel like he was back in school and failing terribly. As if he didn’t already have problems reading, the phrases seemed to go in one ear and out the other. Frustrated, he moved onto the next one which read, “Not to unlearn what you have learned is the most necessary kind of learning.”

Feeling like the book had now taken to mocking him, he snapped it shut and pushed it aside. Heaving a sigh, he leaned back against the pillows and looked up at the ceiling lights flickering above him.

It was quiet this morning in the infirmary. He hadn’t seen anyone since the night before when Cy had brought him dinner. Richelle had dropped off his breakfast before he woke up and he could only guess it was Finn that had come by after to rearrange the eggs into a lewd shape. But for the most part, he’d been alone. He hadn’t even seen Leta since before they’d left to Carthis nearly two days ago.

Though he couldn’t blame her. She was probably tending to Ren now that they were on Carthis. Naturally, he’d be on the backburner. But it was fine. He was getting better, wasn’t he? And besides, this wasn’t exactly the kind of place girls like her should hang out. There was no telling what could happen. Or who might saunter around the corner of the dark, shady alley, a knife in his hand and malice in his eyes.

Fiearius gripped the knife tighter and looked back at the streetlamp overhead, just barely casting a sliver of light onto his black-cloaked figure as it buzzed incessantly. Gods, it was loud. And getting louder. So loud it began to hurt his ears. But no, it wasn’t the buzzing that was filling the alley, was it? It was the scream. The scream he desperately tried to quell, clapping his hand over his mouth as he dug the knife deeper into the man’s chest.

And then it was the buzzing again. Just the buzzing as he stared down at a corpse he barely recognized, blood still pooling out below him. Fiearius glanced up to find another figure standing in the light at the end of the alley. He knew it should be Dez, but it wasn’t Dez. The figure was faceless and shouted something unintelligible. 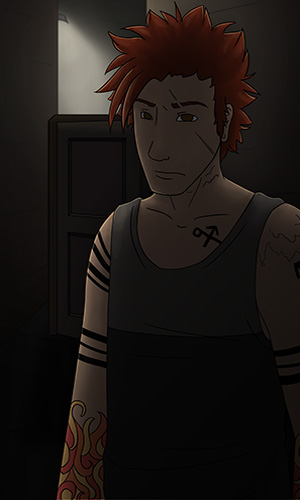 Behind him, a door, unattached to any wall, swung open and the clicking of shoes on pavement met his ears. Turning, he watched emptily as Leta marched towards him, her step full of purpose.

When she reached him, she put her hand on his blood-soaked arm.

And suddenly Fiearius blinked his eyes, the nightmare came crashing down and realization flooded his senses: he was in an infirmary. On a ship. His ship, the Dionysian. Which was on Carthis. In 1861. Cold sweat touched his skin and suddenly Leta was standing beside him, her head tilted at him curiously.

For a moment, she was all pale lines and emerald green eyes. He blinked her back into focus.

“Are you alright?” Soft skin — the palm of  her hand — touched his forehead. “You look pale. How’re you feeling?”

“I’m fine,” he grumbled, though he didn’t brush her away until a second later.

She noticed the book at his side. She picked it up, turning it over in her hands. “Have you been reading?”

“Sort of,” he muttered. “Did you know water dripping is like a force of persistence?” She glanced at him, puzzled. “Yeah I didn’t get it either. By the way, this is what Cy does when you ask him to look after me for a day: gives me books with useless sayings. Possibly the first time I’ve ever missed your treatment plan.”

Leta abruptly put the book back down and looked up at him.

“Well good, because it’s back on now. It’s time to get moving again, captain.”

Fiearius raised his eyebrows, unsure if he even wanted to know what that meant.

“You’re going to walk,” said Leta briskly. “Get out of that bed and really walk. It’s been too long. Here, I even brought you some motivation.”

Leta crossed toward the counter and pulled something out of her knapsack. With a soft thud of glass meeting counter, she placed two dark bottles atop the surface in his line of vision.

Beer. She’d actually brought beer. He hadn’t been near it in over a month and he could practically feel his mouth watering.

But then his eyes moved back to Leta and eyed her skeptically. “Are you trying to bribe me?”

He shook his head in disapproval, but then he noticed the particular shining, inviting label on those bottles. Thra’ki Brew, the best from Satieri.

“Hang on. How’d you know my favorite beer?”

Leta lifted her shoulders in an all-too-innocent shrug. “If you want one, all you have to do is walk from the bed, to this counter. And then you can have a beer.”

Possibly she didn’t realize how much she was asking. The wounds behind his knees had closed, but the injury was far from healed. She was asking him to scale a mountain, or move the Dionysian using only his hands. He gaped at her.

“You sure you don’t want to give me alcohol before you make me do this?”

Leta joined him at his side, grasping his arm to help him ease down. Groaning, he shifted his legs to the edge of the bed, inch by inch. Palms flat against the mattress, he gingerly lowered his bare feet onto the cold metal floor, wincing at first only at the temperature. But then pain gripped his entire bottom half and he could hardly breathe.

“I know it hurts. A lot. I can see it. But you have to do this, just a little each day, starting now. If you don’t, your gait parameters will suffer. That means when you are fully healed, you still won’t walk correctly or efficiently. And you want to be able to run again, don’t you?” she said earnestly. “And strut and swagger around like you used to? And dance with women in bars? And sprint off to escape in the Dionysian?”

Fiearius stared at her. Her shining eyes were so sincerely hopeful in this moment, it was almost hard to look at her. “You are a cruel monster, you know that?” he growled, before readying himself to try again. As he started to lower himself once more, he sighed, “The things I’ll do for a beer…”

Leta caught his forearm, her fingers closing around his tightly just as his feet found the floor.