Minutes later, after Fiearius and Finn hastened to their posts on the other side of the ship, Leta stepped inside the ship’s tiny cramped airlock, waiting beside Cyrus and Corra. She felt numb with shock and readiness: the Baltimore was beyond that door. Any minute now …

Abruptly, she felt cold metal press against her hand — a gun, Corra was handing her a gun. Of course. Leta nodded at her and cocked the gun readily in her hand, an action she’d done hundreds of times by now. Which was funny. Prior to the Dionysian she’d never even touched a handgun before. Some parts of her, it seemed, Ren would no longer recognize …

“You come back, okay?” Corra pressed quietly, her brown eyes shining with worry. “Promise me. You get Ren, and you promise me you’ll come back.”

“Of course,” said Leta, startled. “Of course I will.” But she sounded much braver than she felt.

Luckily, Corra had already moved over to Cyrus and wrapped her arms around his waist. “You too,” she mumbled as he awkwardly patted her on the back.

Suddenly, below their feet, the floor lurched. The walls vibrated, then went very still: they had landed. Leta swallowed hard in her throat, but before she could speak, voices sounded from the other side of the door. Angry, shouting voices, accompanied by pounding on the door …

Fiearius was right: they were ready for them.

Corra raised her eyebrows, suddenly offering a smile. “Sounds rowdy out there.”

Finally, Leta could not take it anymore. She turned to Corra and Cyrus sharply.

Corra interrupted her with a scoff. “Don’t be silly, chika.”

“Of course we do,” Cyrus said simply. “What else are friends for if not raiding Society prison ships?”

Leta shook her head at the pair of them, watching as they stepped toward the door.

With little else to do, Leta joined them and waited. They would know when it was time, Fiearius had said. And sure enough, moments later, Leta heard the heavy clunk of the Dionysian’s ramp hitting the metal floor of the Baltimore’s hangar and the uproar that followed. The voices and pounding outside the airlock door changed to footsteps and soon to silence as those outside fled to join the firefight on the other side of the ship.

Corra readied her gun and looked up at her. “Good luck,” she whispered.

“Dov’ha ti’harian,” said Cyrus in return, mostly under his breath. Corra cast him a puzzled glance.

“I thought you didn’t believe in the Ridellian gods.”

He stepped forward and pushed open the metal door, revealing the hangar that unfolded and unfolded before Leta’s eyes. She’d never seen one so tremendously large.  It was airy and windy enough to feel like they were actually outdoors, stepping onto a real landscape. It would have been fascinating and beautiful in a way that industry was beautiful, if only she was here under vastly different circumstances, and if only the Society librera was not emblazoned high on its metallic walls.

But somehow, they were passing by this part of the Dionysian. They were dodging past Cyrus and Leta. Whatever chaos the captain was spinning — and she could hear it even clearer now, the gunfire in her ears that rooted her in place — in this moment, it’d drawn their eye.

Whatever Fiearius was doing, it was working.

Inhaling a sharp breath, Leta suddenly dodged out of the hatch, clutched her gun in her hand and ran like there was fire at her heels.

“There’s the door,” came Cyrus’ voice from her right side as he sprinted beside her. That door? thought Leta. That tiny shadow on the wall, impossibly far away? Leta felt her heart lurch, but her legs just ran faster. She didn’t pay any heed to the agents filling the hangar. She didn’t glance back to investigate the scene at the Dionysian. It was like she had blinders on all the way up until somehow, miraculously, her hand rammed into a door control and the smooth shiny metal slid open to reveal the small control room beyond.

Cyrus hurried inside behind her and shouted “Cover me!” as he darted over to the console across the room.

At once, Leta spun around and hit the door control again. As it closed, she looked out into the hangar where countless agents had surrounded the rusted dark shape of the Dionysian. For just an instant, she could have sworn she saw a glimpse of red hair amongst the fray. But the door slid shut.

She glanced back at Cyrus, her heart hammering madly in her chest. Had anyone seen them? Would they be followed?

Leta threw a dozen paranoid glances over her shoulder, her gun tight in her hand. It seemed to take years as he typed away frantically, but it was really only seconds until Cyrus turned around and yelled words Leta would never forget. 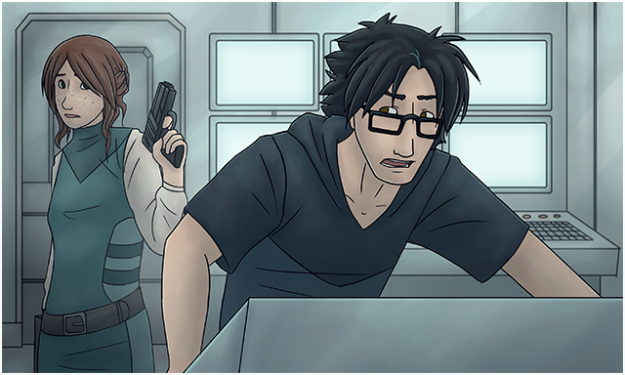