Two mornings later, as she drifted toward the bridge, Leta found the hallways were too ghostly quiet. Especially against the storm raging inside her head.

She had barely slept. Since Fiearius had made the announcement, anything but Ren and their mission had been forgotten, sleep included. Already she’d watched hollowly as most of the crew — Amora, Maya, Niki, Javier — departed the ship for the nearest inn, hopefully to safety.

And after that, it seemed as though every hour, her mind had changed. At one point she had hovered near the hatch of Fiearius’ room, ready to go wake him up and call it all off, and then seconds later her mind shot to Ren, so close, tortured in a cell. Of course they couldn’t storm a prison ship and of course they had to. How could any of them make it back alive? And yet, Fiear would not have sent his own brother to his death, so what were their chances, exactly?

None of these thoughts were reconcilable in the slightest, though she tried, over and over, to reason through them.

Finally, silent as a ghost, she stepped into the bridge. She knew it was time.

Inside, Fiearius was tense and still in the pilot’s seat, Cyrus beside him silently. Corra, who had volunteered to join the mission without hesitation, stood against the wall, biting her thumbnail. Finn stood near her slanted himself in the doorway, his arms crossed.

Leta almost greeted the four of them, but as soon as she stepped into the room, she went very rigid. There was movement at the great bay window.

Slowly, the long grey bow of the Baltimore crept into view, and kept creeping, until an entire landscape of shining metal and glass filled up the whole window. She could see just how easily the Baltimore dwarfed the Dionysian. She had the distinct sense they had just stepped into its grand shadow.

And Ren was aboard that monster? Her Ren? Ren Calimore. She could so easily picture — like she’d just seen him this morning — the black spiky tufts of his hair over his forehead, the thin glasses he wore over the bridge of his nose, the lines that framed his mouth when he laughed or grinned, the curve of his lips when he frowned, intent and thoughtful. And that was hardly all; she had just about every bit of him memorized now. And yet she could not picture him anywhere on that ship.

The sight of the Baltimore did not, though, as she would have expected, send a streak of fear down her spine. In fact, she found the opposite unfolding within her. What it did instill was a sudden measure of resolution, a wildfire burning in her chest.

Because Ren did not belong on that ship and he would not be there for much longer.

Silence enveloped the bridge as everyone gazed at the ship. 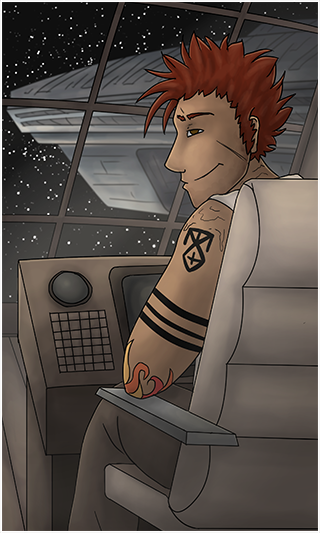 “Last chance to turn around, kiddo,” said Fiearius with a half-hearted smirk. No sooner had the words left his mouth, the Dionysian’s console suddenly lit up red and started beeping quietly.

“Automatic docking sequence,” Cyrus muttered, giving a start. “We’re being pulled in. Probably should have seen that coming.”

Fiearius’ hands fell from the console and he looked back at Leta again. “Nevermind,” he remarked shortly and stood up from his chair. For a moment, he stood silently, staring at the massive ship just outside the Dionysian’s window almost like it was an old friend he hadn’t seen in some time. And perhaps wasn’t all that glad to see again. At last, he broke his gaze and turned for the door.

His meager skeleton crew shuffled out behind him.

“Should we go over the plan again?” Cyrus asked in the hallway. “Y’know…just to be safe.”

Fiearius didn’t respond immediately. When he did, his tone was grim, “Sure. If you want.” He released a sigh and turned to face his crew. “When we land, they’ll be on us immediately. I’m gonna take the biggest fucking gun we have and go out the front ramp and keep ‘em busy. Finn’s gonna head up to the roof and offer some suppressing fire to hold ‘em off.”

But Leta was startled. “You’re really volunteering for all this?” she said to Finn.

“Of course. Wouldn’t miss all the fun.”

“And you two,” Fiearius went on, nodding to Cyrus and Leta, “are gonna head out the back of the Dionysian. Go straight across the hangar to the starboard auxiliary control room. Corra will provide cover for as long as you’re within sight of the ship. Once you’re no longer in sight, she’ll join Finn up top.”

Cyrus nodded and recited quietly, more to himself than anyone, “I can use the control room’s console to find Ren’s cell.” He glanced over at Leta. “And we’ll go get him.”

Leta only nodded. She couldn’t speak.

“Get back as soon as you can,” Fiearius told his brother briskly. “As soon as the three of you step foot on this ship, it leaves. And you’re sure you can override the docking security?”

This time, Cyrus nodded quickly. “Not a problem. Their system’s much weaker than they like to think. I know the guy who designed it. Not exactly the brightest of the bunch.”

“Good.” Fiearius looked around at each of them. “Any questions?”

It was the Dionysian who responded: the walls around them began to tremble and shake.

“Showtime,” said Finn, casting a broad smirk that no one returned. Everyone began to scatter toward their places — everyone except Leta and Fiearius, who suddenly found themselves alone, standing across from one another.

Leta wanted to say something to him — anything — but the thought of Ren being so close made her voice dry up in her throat. She felt both terrified for Fiearius and deeply grateful, and it was hard to know where to begin. If she should even begin.

“Fiear, I don’t really know how to thank you for this.”

“Nothing to thank me for yet,” he said simply.

A broken sigh heaved from her chest. “Well, if we do make it through this, I’ll owe you big-time.”

“Nah.” His mouth curved as if he wanted to smirk at her. But his gaze set on her face was sad — and almost affectionate, tender — when he added, “We’ll call it even.”