It wasn’t long, though, until the answer, the way out of this, came to him, albeit accidentally. Whether it be by sheer luck, coincidence or some act of the gods, his heel found the rock that Leta had previously been using offensively. He stumbled backwards, determined to keep himself upright, but when the knife came flying at him again, he chose the ground over having his neck cut open. That last dodge lead him to tumble backwards, landing with a heavy, painful thump on the dirty ring floor.

As his assailant descended upon him, he only had a split second after impact to realize what the span was trying to tell him: gravity was a friend.

Just as the man came in with one final, decisive stab aimed at his chest, Fiearius wildly kicked out both his legs, hoping for fateful contact that would cause his opponent to lose his footing and go tumbling right over him. The contact, he got. Unfortunately, he landed right on top.

Instantly, Fiearius’ memory reminded him of what Leta had said earlier and his knee responded with a quick jolt right where it hurt most. As the man rolled away in writhing pain, dropping the knife on the ground as he did, Fiearius took the opportunity to kick it out of reach and roll right on top of him, each knee clamped on either side of the man’s neck.

He’d been here before, something in the back of his head told him. It was a strange deja vu. This had already happened and there was nothing he could do to stop it from happening again. Without even hesitating, without even thinking, his hips twisted, his knees locked and he let go.

It took a moment afterwards to even realize what had happened. He’d just broken the man’s neck out of pure instinct. Just as he’d broken Pieter Roland’s twelve years ago. It had disturbed him then just as it disturbed him now, seeing dead eyes staring off into the distance between his legs, even if both men had deserved so very much to die.

Shakily, he forced himself up, stumbling backwards a few steps and staring down at the dead man in shock.

He hadn’t thought he’d had that kind of thing in him anymore. Apparently, it was something that didn’t just go away.

It took several seconds after he’d collected himself to even remember where he was as the noise of the crowd filtered back in. He had stopped hearing it. But it wasn’t the crowd he was concerned about. Ignoring everything else, he turned around, still swaying slightly, stunned, and stalked back across the ring towards Leta.

She was still on the ground, slumped against the wall, her vacant eyes looking past him toward the dead man in the center of the ring.

“Are you alright?” he yelled, over the noise.

Leta hadn’t answered. She hadn’t breathed a single word when he approached her after the kill, nor when the guards seized them both, nor when they dragged them out of the ring back toward the cells. She was silent, her eyes distant and staring and glancing everywhere but at him.

She wasn’t the only one. The guards assigned to pull him back into the cells looked afraid to stand near him: after all, he was the maniac who killed a man with both hands tied behind his back …

Their fear did have it uses, at least. When one guard attempted to bind Leta’s wrists again, Fiearius had shot him a look of such pure crazed menace that the ropes actually fell out of his hands in shock.

But, to the relief of the guards, Fiearius didn’t put up any more fight. He felt exhaustion straight down to his bones and he was too worried at the sight of blood pouring down Leta’s leg. She could barely walk without the guards holding her up, and he got the feeling that no one intended to treat it.

So he followed after her, intending to just do it himself. He wasn’t sure they wanted to put him in the same cell as Leta, but he didn’t exactly give them a choice when he walked right into it.

Once inside the cell, Leta staggered away from him at once and slowly sank down onto the ground against the wall, wincing as she pulled her leg up to her side to examine the wound.

“Let me see it,” Fiearius said, moving to crouch to the ground in front of her, though she flinched away from him at once and hissed, “Don’t. Don’t touch me.”

Her voice was sharp, fearful and it cut through the air in the room. He couldn’t fault her for it: this whole mess was his fault. He’d nearly gotten her killed; she’d just been attacked by a stranger who wanted to end her for sport. And then she saw him like that in the ring … raw, violent … of course she shrank away.

“We need to stop the bleeding,” he told her, calming his voice in spite of his impatience. He didn’t even have the energy left to be annoyed. “Let me see it,” he said again quietly, and waited.

Finally, glaring at him through glassy eyes, she gingerly unfolded her leg. Crouched down on his feet, Fiearius got his first real look at the knife wound, the jagged gash down her leg. It was thick as a pencil, at least six inches long, and flowing blood freely down her flesh. The palms of her hands, he noticed, were already soaked red.

Fiearius regarded the wound for a moment, but when he tried to reach to it, of course, he could not. The ropes still dug into his hands. With a note of irritation, his eyes flicked back up to Leta meaningfully.

She met his stare emptily, her eyes bloodshot. Silent tears were pouring down her cheeks, creating streaks in the dirt on her face. Finally, with trembling fingers, she reached to untie his bindings. He held still, watching her fingers deftly unknot the rope, wondering what was going through her head. He’d never seen her show weakness before — surely, she wouldn’t have let him see her vulnerable — and it was not, as he thought before this night, satisfying or funny or validating in the slightest.

The ropes fell to the ground between them. Working quickly, Fiearius reached back and slid his shirt off his shoulders and over his head.

As he leaned in again, Leta pointed out quietly, “You don’t even know how to treat this,” with the smallest hint of her normal combative self. “You’re not the doctor here.”

Fiearius smirked, holding a corner of the fabric in his teeth as he started to rip it into a makeshift bandage. “Oh yeah? Wonder how you think we survived before you then, eh?” he asked, and then released the shredded clothing from his mouth and rolled the leg of her pants out of the way. “Although,” he added, beginning to wrap the cloth around her leg, “For once, please feel free to correct me if I’m doing this wrong.”

To his surprise, a watery laugh fell out of her, and as he glanced to her face, Fiearius was met with the bizarre sight of a woman laughing and crying at the same time. And for perhaps the first time, Leta had no criticisms to give. Instead, she bowed her head, her chin touching the top of her chest as she managed, “Right. Thanks, I think … ”

In silence he finished knotting the blood-soaked fabric around her leg, the only sounds coming from the tug and pull of the fabric, and the hiss of her pained breath when he brushed the open wound too closely.

Finally, as he tied off the last knot with a tug, Leta asked quietly, “So how long are they going to keep us here?” which was a question he did not want to consider. 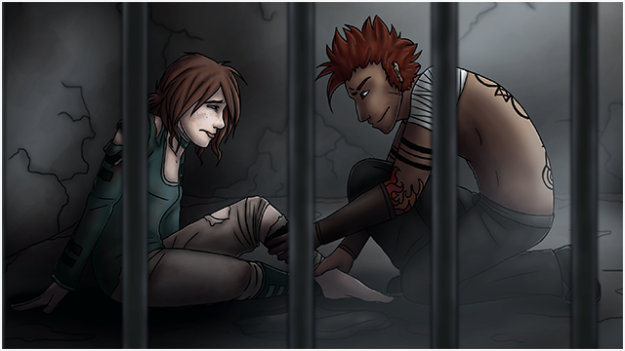