Fiearius didn’t fight the men who marched in through the cell door, seized his arms and pulled him down the hallway after Leta. Nor did he fight them when they shoved him into a chair on the side of the ring, laughed heartily and sat next to him, their guns at the ready in case he decided to make a bolt for it. But there was no reason to bolt. Not yet anyway. Even if he could get past all these people, he’d be leaving the doctor in the ring to fight for her life.

He didn’t much like Leta. But she didn’t deserve this. No one deserved this.

So he sat there calmly and glanced around, like they were all out to eat together at a casual restaurant. Admittedly, Traze had a rather impressive set-up going on down here and just for a moment, Fiearius had the strangest sensation that it was twelve years ago and he was home again, about to watch a good boxing match.

That is, until his eyes came across the large mass of man that Leta was supposed to be fighting and the flashback disappeared. The sight of him caused his breath to abandon his lungs in shock. There was a big difference between twelve years ago and tonight. In the boxing matches on Satieri, they tended not to kill one another.

No one was watching, but even if they had been, he couldn’t hold back the expression of horror. Him? Against her? He hadn’t expected these people to be fair, but this was more than just a criminal pairing. It was ludicrous. What was even the point?

She really had been sent to her death.

He looked around hastily for a way to help before this began, but it seemed useless. There were two loaded guns on either side of him and the binds on his wrists weren’t exactly lending themselves to assistance. For the moment, he was stuck. She was on her own, at least until an opportunity presented itself. He looked up at the skinny, shaky figure standing on the edge of the ring. All he could hope was that she’d last until then.

Fiearius could hardly watch as her opponent made that first barreling run towards her, his fist raised. He was fairly sure this would be done before it even began, but to his surprise and relief, Leta ducked out of the way and continued to do so through the next few attacks. He had to admit that she did rather well at the start of the fight. Leta was quick on her feet. Sharp. Determined. A natural even, especially against this man who turned out to be too big and too slow to keep up with her quick movements.

But of course that could only last for so long. His eyes followed the two of them back and forth across the ring, his heart hammering in anticipation for that one lucky swipe that would end it. When he took her by the throat and the whole crowd roared its approval, he was sure that was it.

In his panic, he started to push forward into the crowd, desperate to just get closer and do…something. Anything. But while one of his guards was distracted, the other was bored.

Suddenly, just as his watchdog turned back to the ring, Fiearius lifted his bound arms as much as he could and swung them towards the man. His elbow landed in a solid blow to the man’s cheek and without hesitation, Fiearius used the momentum to launch himself from his chair and into the crowd.

As he pushed through the wall of people, his shoulders colliding with anyone his way, he could no longer see what was going on in the ring, but he could hear and feel the reactions from those around him. And that was enough. The shifts from ‘oohs’ to ‘awws’ and back again told him just how close this thing was to its climax.

Panicked that it may have been too late — he could not imagine, did not want to imagine, the sight of Leta lifeless on the ground — he slammed against the side of the ring and scrambled over the edges. In one motion he landed in the spotlighted center stage, right across from that son of a bitch dragging a knife through his doctor’s leg.

The crowd silenced as all eyes turned onto him, the intruder. A few of Traze’s men began to go after him, pull him out of the ring, but somewhere across the room, they were called off. Slowly, the silence shifted toward anticipation and excitement.

But Fiearius heard or registered none of it. All he heard was Leta’s cry of pain that sent icy streaks down his spine. And then, something in him switched on.

Hot, roiling anger and adrenaline shot through his veins and before Leta’s assailant even realized why his audience had quieted, Fiearius — his hands still tied together at his back — ran straight at him. Absent the use of his fists to throw a punch as he was, he did the next best thing: rammed right into him with the full force of his body.

However, while Fiearius was a staggering 6’3″, he had never been particularly robust. The full force of his body against this guy wasn’t substantial. It was enough to knock the beast of a man off balance for a moment and enough to get his attention away from the wounded woman at his feet, but it wasn’t enough to actually injure him. And as Fiearius stumbled backwards, probably feeling more pain from that slam than his opponent did, and looked up into the man’s furious eyes, he got the distinct feeling that he wasn’t much more prepared for this than Leta had been.

Well this was going to be be fun, he thought wildly in the one last calm moment before the chaos. 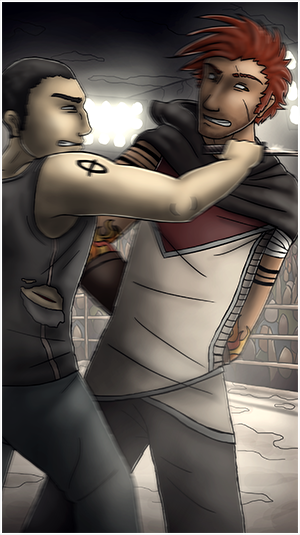 Spitting madly in anger, the man reared for what looked like a full-force slam of his own, knife still in hand. Fiearius stared patiently at him, forcing himself entirely still as a vengeful fist raged towards him, only ducking quickly out of the way at the very last second, the blade barely missing his ear as it swept across the empty air. It would have been a great time to return a strike of his own straight to the abdomen. Instinctually, he tried, but when the rope around his wrists held him back, he was forced to improvise.

Before his opponent had the chance to regain his composure, stumbling forward from the failed hit, Fiearius tucked one leg in and jabbed the other knee right into his stomach. Immediately, the man was bent double until that same knee swung upward and knocked him in the chin.

As the man reeled from the double strike, shaking his head and flailing his fists uselessly, Fiearius leaned back and then rammed his forehead into his opponent’s, knocking him backwards a few steps and accelerating the blood dripping from the corners of his mouth. Unfortunately, that was where Fiearius’ advantage ended: with him out of reach and himself out of limbs to employ.

Now fueled by a vicious rage and embarrassment , the opponent rushed forward, swinging the knife before him in grand, rapid sweeps, hoping to catch a bit of misplaced flesh. It only took one shallow slash across his shoulder for Fiearius to realize the tables had turned. Fortunately, he had always been very good at running away backwards.

He danced a few steps away, narrowly avoiding another swipe aimed at his eyes. The man advanced more rapidly, throwing more and more energy into each swing, but Fiearius continued to elude him. But he could only do this for so long. Without the means to block, all he could do was throw himself out of the way over and over and over. Which got tiring quickly.

He remembered this sort of thing being much easier when he was younger.