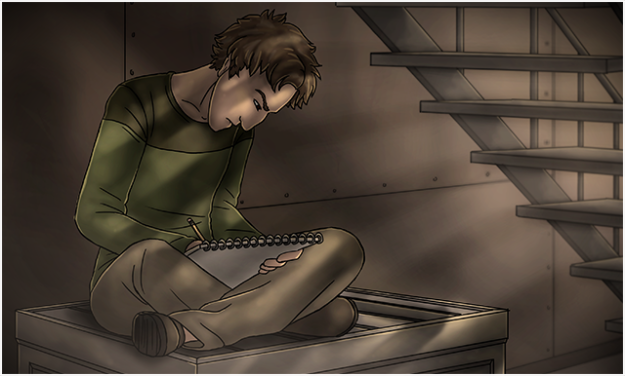 Javier had only been aboard the Dionysian for ten months, and yes, he was only a lowly deckhand, but he’d never heard the crew complain quite like this.

In a corner of the cargo bay, the nineteen-year-old sat cross-legged atop a crate, his sketchbook propped up on his knees. He was nearly finished laying down the lines of an aerial view of the Dionysian. It wasn’t his best work, but he rather liked how the drawing was turning out. The Dionysian may have been outdated and antiquated, but she was still crafted of clean smooth lines. As an artist (was he an artist? He didn’t think he was, but Niki had called him one before), he certainly appreciated that. In his eyes, she was perfect.

Every few seconds, however, he picked up his head, distracted from his progress. The conversation around him ranged from amusing, to surprising, to downright offensive.

“We were supposed to land on Jira a month ago,” the older woman, Palia, was complaining in her usual high-pitched, simpering voice. She was pacing the room, tossing her wrinkled hands in the air. “I know Aiden said the schedule wasn’t set in stone, but this is getting ridiculous.”

“If I’d known it was going to take this long, we would have doled out the extra credits for the official transit ship,” said Alistair, her husband, grumbling from his seat on a crate.

“Yeah, we’re all off track now, ain’t we,” said Maya, slouched against the wall and examining her nails. Javier wasn’t surprised to see her looking sour. She’d been in a bad mood ever since Leta and Corra had gone to the gala the other night all dressed up. “Go figure,” she snarled. “Been a mess since Dr. What’s-Her-Face came aboard.”

“I hate to say it,” Alistair sighed, “but I’m afraid that Aiden — as much as we all like him — isn’t doing his job here.”

“Neither is the captain,” said Arlo Harvey smoothly. Arlo stood in the center of the room, his arms crossed importantly, looking worried.

Arlo was a good conversationalist, Javier always thought, if a bit pompous. Javier noticed he tended to favor the crew members who came from affluent backgrounds and education and seemed decidedly less interested in anyone else. He also had an opinion on everything, from the best brands of alcohol to local planetary politics. And, apparently, the current status of the ship.

“The captain’s not doing his job for us,” he said again, his voice raised importantly. “Now, the question is,” he went on calmly, looking around at everyone, “what’re we going to do about it?”

This was less of a conversation, Javier realized with a jolt, and more of an organized meeting. A summit. How did Javier end up here? He looked around in alarm. Had he accidentally joined this meeting?

Suddenly, Javier was nervous. How Fiearius would react if he overheard this blasphemy, he could not simply imagine. Fleetingly, Javier’s head was filled with the image of Fiearius from a few weeks prior: marching up the cargo bay, guns in both hands, blood soaking his clothes, looking positively menacing …

Remembering that vividly, Javier realized one thing: he did not want to be found near this conversation. He did not want to be associated with this kind of — disloyalty. Perhaps their complaints were justified, perhaps they weren’t, whatever. Javier slid his long legs to the floor and started toward the staircase quickly, his sketchbook underarm.

As he hurried up the stairs, he wondered, did Niki know about this? Nikkolai, one of the other young deckhands aboard the Dionysian, had an ear for gossip, and he was friends with every single person aboard. But did he feel the same way as these people? Javier couldn’t imagine him talking this badly about anyone. Curious what he’d think, Javier headed to the mess hall to find him.

But Niki wasn’t in the mess hall. Instead, Javier found the ship’s engineer and doctor. Cyrus leaned against the cabinets, half-turned toward Leta, who sat atop the counter eating an apple, her legs hanging toward the floor. The two of them appeared to be in deep, hushed conversation, and Javier had the sudden paranoid sense they were discussing him.

Of course, logic kicked in a second later. Why the heck would they be discussing him? He’d probably said three words to Cyrus in all his time aboard. He had actually talked to Leta a few times and she was always nice to him.

Also, she was pretty. Confusingly pretty. She was all smooth lines and angles, like his favorite ships to draw. During mealtimes, Javier found her freckles particularly distracting and usually seated himself away from her.

Now, however, he felt unbearably curious as to what they were talking about. He paused in the doorway just long enough to hear a snippet of their conversation.

“ — so you didn’t dance together at the gala. You hung out all night though, didn’t you?” Leta was saying. Her tone was soothing. “We were all under a lot of pressure that night, who cares if you didn’t dance with her?”

“I care,” Cyrus grunted moodily. “She cares? I dunno, she probably doesn’t care. It just…didn’t turn out as I would have liked.”

The rest of the conversation became muddled and unclear. Feeling unusually bold (perhaps Niki was rubbing off on him afterall), Javier stepped into the mess hall and crossed toward the counters. Keeping one ear turned to Leta, he began pulling open cabinets, pretending to search for a snack.