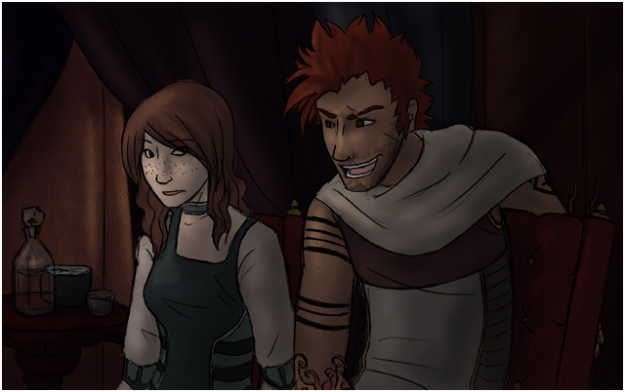 Fiearius leaned back in his chair and swung his arm over the back of it. The joking and mockery disappeared from his face as he spoke briskly, “Six cases, standard artillery. Fine grade stuff, recent models, Riolan made. Virgin heat. Asking 10k.”

Solon too had shed any mask of friendliness as soon as Fiearius had switched his own attitude. He was listening intently. Almost too intently. His eyes trailed downwards to his hands, clasped together before him on the surface of his desk, and he stared at them thoughtfully for some time. Until at last, he looked up. “What’s the catch?”

Fiearius’ head tilted innocently. “Why do you think there’s a catch?”

“Because 10k is about what it’s worth,” Solon pointed out, unweaving his fingers and letting them tap together thoughtfully instead. “You always ask for more.” He smirked gently. “So I ask again. What’s the catch?”

Fiearius returned his smirk with one of his own. “They’re marked,” he admitted, sounding reluctant to do so. “Paulos Torian.”

Solon’s brows raised thoughtfully at the name, his eyes still hanging around his patiently drumming fingertips. Again, he fell silent before finally deciding, “I’ll give you five.”

“Well it’s what they’re worth,” Goddora shot back, equally as unhesitant.

“They’re worth at least six five,” Fiearius told him matter-of-factly, to which Solon shrugged.

“No, no, you don’t understand,” Fiearius said calmly, raising his hand to interrupt the order. “I need ten.”

“And why would I give you ten for something you just admitted wasn’t worth anywhere near ten?” Solon counter-pointed, narrowing his eyes at his opponent.

“Because you like me,” Fiearius replied with an unmatched calmness. “Or because it’s an investment. Or because I said pretty pretty please? I’m sure we can work something out.” Fiearius gave the man a knowing look that clearly stated that something else was available to be put on the table which was just enough bait to interest Goddora.

He leaned forward on his desk and met Fiearius’ eyes rather intensely. “I thought you didn’t do that type of work anymore,” he remarked, to which Leta sent Fiearius a curious look.

“I don’t,” he said absently, shrugging one shoulder. “Well, not usually anyway. We can talk about that some other time. But for now, I’ve got a better idea. Who’s critical?”

Solon raised his brow again, looking ever more curious as to what the crack captain of the Dionysian was up to. “Sorry?” he asked, confused.

Solon fell silent for a moment, then admitted, “Roman. You’ve met him. My right-hand man. A good man. A family man.” He seemed genuinely sad about the state of affairs he spoke of, his eyes downcast and his tone grave as though the man were already dead. “Shot in the stomach a few days ago. And you know how doctors out here are. No matter how much you pay them, they don’t get any better at their jobs.”

His sight went from the floor to the door Saviano had come from, lines of anger creasing his face before he let it go and glared back at Fiearius. “Why do you ask?”

“Well,” Fiearius began, standing up to his feet and striding toward Leta’s chair. “I happen to have with me a seasoned trauma surgeon with a decade of experience and mighty fine alpha planet medical training.” He dropped his hands on her shoulders. Leta tried not to wince in distaste. Instead, she maintained a half-smirk of her very own. That’s what these people did, didn’t they? If she wanted to make it out of here alive, she supposed she had a part to play too.

“She’s pretty good with gunshot wounds,” Fiearius went on, his voice smooth and confident. “And by all means, about a thousand times more capable than any of the failures you’ve got here.” Abruptly, his tone dropped to seriousness as he said, “Ten if she can fix him.”

Across the desk, Solon also stood to his feet. His eyes narrowed at the sight of the two of them, not liking the way this was turning out. Mistrust glinted in his eyes as he glanced at Fiearius, then down to Leta. “If,” he repeated skeptically.

Fiearius shrugged. “Can’t promise anything,” he admitted. “But it’s worth a shot isn’t it? At least let her take a look.”

Solon watched the smiling egotist across from him for a long moment. The seconds dragged on and Leta was certain they were about to be thrown from the office.

“If I may ask,” he finally stated carefully. “How did you happen across this decade-experienced, alpha-planet trauma surgeon?”

Fiearius pulled his hands away from Leta’s shoulders, stood up straighter and offered casually, “Kidnapped her.” Saviano made a murmur of amusement across the room. At Solon’s subtly astounded expression, Fiearius smiled and added, “A man has his vices.”

Head shaking, Solon rolled his eyes and sat back down at his desk. “Take her to him,” he ordered Saviano, waving his hand as though to get the whole stench of this mess out of his office. 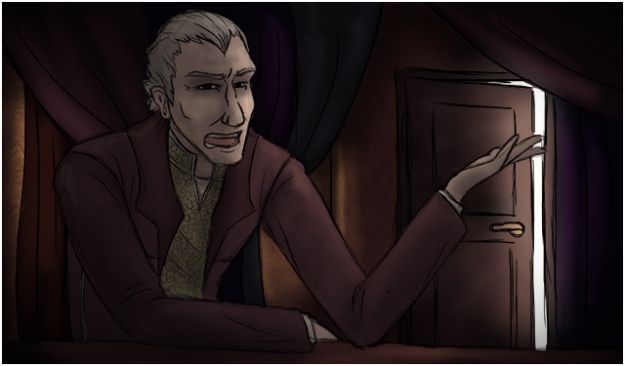