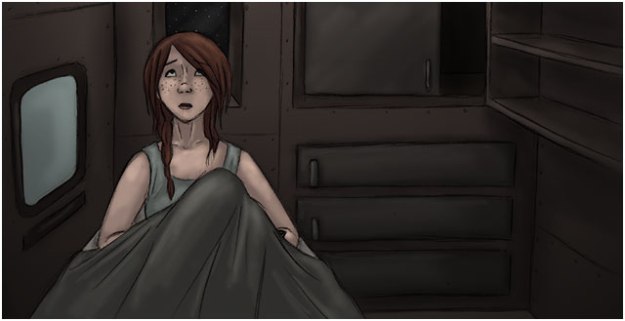 At first, Leta did not know where she was.

She cracked her eyes open and blinked the sleep from them. Overhead, the metallic, rusty-oranged ceiling swam into view. The Dionsyian. The criminal runaway ship. That’s where she was.

So yesterday hadn’t been a dream after all.

Feeling stunned all over again, Leta sat up from bed and put her bare feet to the floor. For a moment she took in her unexpected surroundings, the quarters that Cyrus had led her to the previous night. After their exhausting conversation, he’d shown her this bedroom with a grimace of apology. The room barely fit a narrow lumpy bed and a set of drawers. A sour smell hung in the air, like a stuffy closet. Actually, it was smaller than the walk-in closet in her loft on Vescent.

But that didn’t matter. Not at all. If everything Cyrus had said last night was true, then she truly had a new lead. She was truly one step closer to Ren. And if she could get help from Fiearius, then she was ten steps closer. And Vescent was officially behind her.

Feeling suddenly wide-awake, Leta pulled on the rest of her divested clothes from the floor before leaving the room and stepping out into the corridor. The hall was entirely empty, but she could hear the muffled chatter of voices, distantly, from above her head.

She wasn’t sure what she was expecting when she carefully followed the voices up a set of stairs, down another long hallway and ended upon threshold of a mess hall. The room was small, but full: it held several round mismatched tables and chairs. A dozen or so people were chattering over their plates in a noisy din.

Breakfast. Of course. Even a boat full of criminals needed breakfast.

No one paid her attention as her eyes scanned over the room until they landed on a familiar shock of messy black hair. With that, she abandoned the doorway and slipped into the chair beside Cyrus, the only person she knew. As she sat down, he was in deep conversation with the older man across the table.

“I just can’t fathom that you didn’t like it,“ the unfamiliar man was saying patiently. “It’s a classic literary masterpiece.”

“I don’t know,” Cyrus responded, a touch hesitantly, “maybe I’m just picky, but I honestly wasn’t that impressed. I guess it’s just hard to understand the context. Ancient literature and all.”

“The context is irrelevant,” his companion told him in return. “It doesn’t matter if it takes place in the Americas two thousand years ago or on Ascendia today, it’s a story of the human spirit and perseverance through hard times. It’s timeless.”

“Well yeah, but the context gets in the way when you’re having to translate things. And I just don’t get it. What the hell is a ‘dust bowl’? And that whole chapter about…what was it called? A turtle? What is that? And come on, that ending–” Finally, heavily delayed, Cyrus seemed to notice that Leta had sat down in the middle of his literature discussion and looked over at her with widened eyes as though confused about how she’d ever come to be there.

“Oh, morning,” he said, a little blankly. “Did you sleep okay?” he asked, smiling at her kindly, although a hint of guilt, perhaps at the reminder of what he’d done yesterday, tugged at the corner of his eyes. A beat or two into the natural pause for her response, that same guilty smile transformed into grimace of embarrassment.

“Oh,” he proclaimed awkwardly. “Leta, this is Aiden.” He indicated the man to his left. “He’s the ship’s one-man human resources department and moral compass.” He turned to Aiden and offered, “Aiden, this is Leta. The doctor.” It was hard for her to miss the rather desperate knowing stare Cyrus provided to his so-called compass.

“Glad to have you, Leta,” said Aiden, his voice low and warm as he reached to grasp her hand firmly. His face was friendly, touched with signs of age, and his eyes were dark and kind. “Truly. We could certainly use a physician. Haven’t we been telling the captain that for ages, Cyrus?”

“So I keep hearing,” said Leta, giving a cautious, slow smile. After a moment, she ventured, “Have you — really never had a medic?”

The lines framing Aiden’s eyes wrinkled slightly, hinting toward a smile. “We seem to run through them for some reason,” he admitted.

Cyrus shot Aiden a nervous glance before smiling at Leta and muttering, “It’s just a weird coincidence.” Rather eager to change the subject, he went on, “Anyway, I should probably warn you. This crew has a certain…fondness for newcomers.” He shot a skeptical glance over at the rest of the rabble as they ate their breakfasts, unaware that anything or anyone required their attention. They weren’t exactly proving his point. Unphased, Cyrus added, “Just don’t drink anything they give you that’s orange. As a rule.”

“Orange,” Leta mumbled in response, as if committing the detail to memory. “Right. Dare I ask why?” she added, her eyes passing over the faces in the room curiously. To her, these people certainly did not seem like runaway, Society-hating, wanted criminals to her. Mostly they seemed like a crew hungry for breakfast. A crew that was not particularly interested in their new physician. No one seemed to notice their newest kidnapped counterpart.

Unexpectedly, Leta locked eyes with one person across the room — a burly, broad-shouldered man who practically took up the entire table himself. He was expressionless behind his gnarled black beard as he sat back, a pipe in one of his hands, an empty plate in front of him. He sat alone, but it was his unapologetic eye contact that Leta found most unnerving. Something in him struck Leta as off as his cold grey eyes rested on her unblinkingly.

“Who’s that?” said Leta, finally averting her eyes gratefully back to Cyrus.

Cyrus glanced sideways to what she was referring to, but when he realized, he immediately looked away. “Oh, that’s Ludo,” he replied quietly. “One of Fiear’s gunhands. Don’t mind him. He’s kind of…well, he’s harmless I think. Loyal, if nothing else. Although no one would blame you if you steered clear.” His eyes trailed back to the man briefly. “Most of us do.”