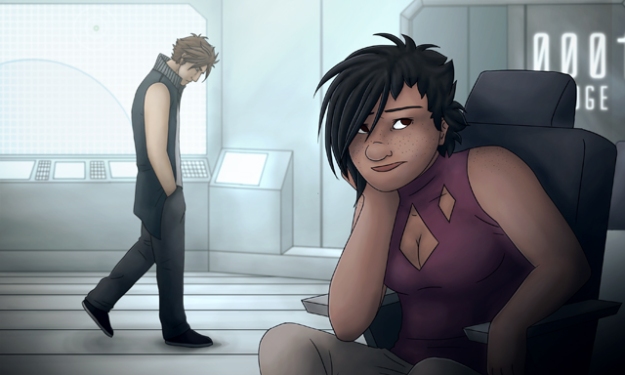 This felt terribly familiar. Corra’s fingers tapped against her cheek nervously as her eyes scanned the expanse of black out beyond the Beacon’s bay window. Nothing looked back at her but the dark shape of Satieri, silhouetted against the light of its neighboring sun, but that didn’t calm the ocean of worry roiling through her veins.

She’d only been to Satieri once and the circumstances were eerily similar. Leta and Cyrus mounted a dangerous mission on the planet’s surface while Corra and Finn sat stagnant on the Beacon, waiting for them to return, useless and powerless in the outcome. That time too, she had whittled away the time in prayers that all would turn out as Leta hoped.

Finn also seemed to be using the opportunity similarly. He paced the floor of the bridge relentlessly, back and forth, back and forth, silent and stoic. An unlit cigarette sat between his fingers, a desperate lifeline he was at least coherent enough not to partake in.

The others were just as quiet. Alyx sat in her navigation seat, elbows propped on her console, her index finger drawing circles on the metal as she watched with dazed disinterest. Daelen leaned against the back wall, arms over his chest and Cai sat cross-legged in the doorway, his hands clutching his feet.

The only break in the silence came from Kalli who periodically squirmed in her mother’s lap or told Addy that she was bored. Addy herself, who hadn’t taken her eyes off of the window since Cyrus had left, just smoothed back the little girl’s hair and whispered reassurance into her ear until she quieted again. Corra knew how awful she felt so she could only imagine the kind of turmoil going on beneath Addy’s calm exterior.

She swallowed the thought and returned her attention to the window. Still empty. And yet still the tension in the bridge was so thick Corra thought she couldn’t even get a knife through it if she tried.

Minutes passed. How long had it even been since the Spirit had left? Should they have been landing by now? Would they risk transmission interception to let the Beacon know even if they had? What if something happened? Would she find out before it was too late or would she just have to sit here through whatever came next and hope all went well?

Suddenly, she felt Finn’s presence by her shoulder. She glanced up to find him staring out into space, his eyes dark and his mouth taut in a grimace. Then there was a flash of something else, just as he said, “Why is it always us that gets left behind?”

Humor, of course. Corra managed a single-noted breathy laugh at his attempt to lighten the mood a bit. Though Finn had meant it as a joke, it was a question Corra had asked herself in seriousness more than once today. Because they had a ship, probably. Because they couldn’t all fit on the Spirit. Because someone had to stay up in orbit and keep an eye on the larger situation. Because Leta and Cyrus trusted them to make responsible decisions. Because Leta and Cyrus didn’t trust them enough to want them at their side…

“Probably because you annoy them,” was Alyx’s answer, said in a half-hearted mumble from her spot at her console.

“What are you talking about?” scoffed Finn, running with the cheeriness before it evaporated. “Leta and I have a very special bond.” The navigator cast him a sideways glance so dripping with skepticism Corra couldn’t help but smile. “And Cyrus? I’ll have you know, he once told me–”

“Riley,” Corra cut him off, tilting her head towards Addy who no doubt didn’t need to hear whatever slight he was about to deliver to her absent partner.

But Addy smiled and shook her head. “It’s okay. I wanna know. What did he tell you?”

Finn met Corra’s eyes and she shrugged her permission. “He told me he aspired to be just like me one day.”

Addy snorted a laugh and Alyx flashed a tired grin. “I’m so so sorry, Adds.”

The bridge as a whole let out a collective chuckle, save for Kalli who demanded quietly, “What’s funny?” and just for a moment, things felt a little normal. Almost like they weren’t sitting here, on the edge of a very possible end to the Span as they knew it. The thought was at once amusing and terrifying and very quickly, the light in Corra’s chest started to plummet back into darkness.

That was when she felt a hand on hers and it drew her back from the brink of despair. She looked up again at Finn, turning her palm towards his and lacing their fingers together. It wasn’t much, but even a small dose of comfort was better than none. And when he crouched down beside her and whispered, “There’s nothing we can do right now,” that helped too.

“I know.” She squeezed his hand and took a deep breath. “I know that.”

“They’ll be alright. They can do this. Come on, if anyone can pull this off–”

“It’s Leta.” Corra nodded. “I know.” She glanced over at him and that ridiculous adorable boyish smirk of his was enough to turn the corners of her mouth up. And when she looked past him at Alyx who was watching the two of them with far more interest than Corra would have liked, her cheeks flushed red instantly.

Now was really not the time for this. She released Finn’s hand and, to give a reason, started typing on her console. Typing, she was sure Finn noticed, nothing in particular. Fortunately, he said nothing, instead standing back up and resting his hand on the back of her chair. And then he said, “Looks like the calvary’s here.”

Corra looked up from the console just in time to see three Carthian dreadnoughts appear seemingly out of nowhere. They weren’t alone. Destroyers followed, a few dozen smaller battleships, three more massive warships. The space where before there had been nothing but emptiness and silence was now filled with a wall of Carthian ships, more than Corra had ever seen. Leta hadn’t been kidding, they really were intending to hit Satieri with everything they had. And they were hitting it fast.

“Shit,” breathed Alyx as the smaller ships zoomed towards the planet, already firing off their first shots into the atmosphere. “They’re early.”

“How early?” asked Cai, scrambling to his feet and hurrying forward to get a better look outside.

“Earlier than we anticipated,” Alyx answered. “Leta and Cy probably haven’t landed yet.”

“What?!” Addy was on her feet, the panic streaking through her voice. “If they’re still in the air now?” She gestured towards the planet. Carthis’ bombardment was already under way. “If they get caught in this–”

“Can we get in touch with them?” Daelen asked.

“If we do, we might give away their location,” Finn answered. “Where the hell is Fiear’s fleet anyway?”

“Does that matter?!” demanded Addy. “If Cy and Leta are still flying during this–”

Alyx shook her head. “It’s not like us warning them is gonna change anything, they already know.”

“But we have to do something–”

Corra didn’t disagree, but she didn’t say it either. In fact, she tuned out of the conversation entirely. They continued to argue, but it sounded like a distant chant, barely registering in even the back of her mind. Her entire attention was transfixed on something she could barely make out. A shape that had appeared beyond the ships, still distant and tiny in her vision. No one seemed concerned about it but her, until she pointed her finger towards the window and demanded, “What the hell is that?”

The garbled, panic-stricken fragments of words coming out of the Spirit’s COMM did nothing to help Leta’s nerves as the ship descended through Satieri’s atmosphere, haloed by streaks of light from above. Leta had been on the surface the last time Carthis had filled Satieran skies with their fire, but it had been nothing like this. The city was so alight, it could have been the middle of the day rather than the small hours of the early morning.

Cyrus was doing his best to avoid them. He grit his teeth and yanked on the Spirit’s manual controls, veering her out of the way of a Carthian blast just in time. “What’s she saying?”

“I can’t tell.” Leta looked away from the console she was furiously tapping on, held onto her seat to stay steady and leaned closer to the speaker. It didn’t help Corra’s voice sound any less unintelligible. “Something about–not? Not something? I can’t make it out.”

“Not die?” Cyrus suggested, just as a burst of light flew past the window and he slammed on the backwards thrusters. “Not die is good advice.”

Leta inched closer, straining to make sense out of the haze, then closed the gap, hitting her temple on the metal panel with a loud thunk as Cyrus banked a quick left.

“Sorry!” He grimaced and pulled another sharp turn. “It’s the interference from the blasts, we’re not gonna get a cleaner signal.”

Leta didn’t think Corra would break their planned radio silence for something less than urgent, but Cyrus was right. If anything, the further they went, the less clear the signal became. She would just have to hope the Beacon wanted to warn them about Carthis’ arrival. Warn them to watch out for stray ship blasts. As if they wouldn’t have already noticed.

“We can’t read you, but we’re alright, we’re nearly to the surface,” Leta called into the COMM, hoping maybe the reassurance was all they’d been looking for and knowing in her bundle of nerves that it wasn’t. Still, she pushed aside the concern for now as the Spirit shook violently, caught in the wake of a particularly strong blast that erupted into a cloud of smoke below them.

Leta had been on enough ships by now to have overcome her fear of heights during take-offs and landings, but looking down on Paradiex now, covered in swirling smoke and fire, its lights forming streaks tilting in and out of view as Cyrus steered the Spirit to and fro, her stomach felt suddenly very queasy.

“How much longer?” she needed to know.

Cyrus didn’t answer right away. He was looking about the console, a hint of desperation in his eyes that made Leta’s blood run cold. “Cy? Is something–”