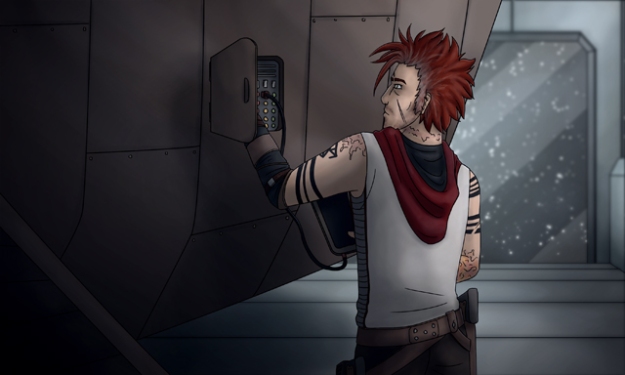 It was still early when Leta drifted down the Beacon’s empty hallways towards the docking bay where the Dionysian was parked. Early in the morning, but late to the party, it seemed, as most of the crews of both ships were bustling about in preparation. Of course they were. There was a lot to do. The Dionysian set sail for Satieri today.

She brushed past Maya who was unloading the ship’s unnecessary cargo into the care of Cai, past Eve who was arguing with Rhys over which guns to bring, past Richelle in deep discussion with Addy and straight towards the Dionysian’s captain, solitary and focused on the side of his ship, a panel open and a monitoring tablet in his hand.

“Everything alright with her?” Leta asked as she approached, mainly to announce her presence. Fiearius, she’d found out, still hadn’t quite adapted to his new lack of peripheral vision. Leta had never seen him as startled as he’d been the night before when she’d accidentally snuck up on him in the bridge.

“Define alright,” Fiearius mumbled, casting her a glance and then frowning at the tablet as though it had offended him.

“Not going to explode on takeoff?” was Leta’s guess and Fiearius snorted a laugh.

“You know I can’t promise that.”

With a sigh, he slammed the panel shut, delivering a swift second hit when it started to swing open again, and strode past her. “Need somethin’?”

“Nothing in particular.” Leta followed after him, tucking her arms behind her back. “Just checking–” Before she could finish her sentence, a chunk of metal plating zoomed past her face, right into the narrow space between her and Fiearius, landing on the Beacon’s grated floor with a horrific clatter.

Her mouth still poised to form the ‘in’ she’d meant to say, Leta glanced up to see Cyrus and Finn leaning over the edge of the ship’s upper hull. “Sorry!” Cyrus called down to her before casting Finn a glare and growling, “I told you not to hold it like that.”

They continued to argue about the matter, but Leta stepped over the plating and continued after Fiearius. “Everything ready to go?”

Fiearius’s face flashed a grimace, but his answer was positive. “Almost.” It wasn’t much of a secret that he wasn’t looking forward to this mission. Not only was it the most dangerous yet, landing on Satieri, the very home planet of the Society, but the task had taken an unexpected personal turn. Leta hadn’t asked how Fiearius was feeling about revisiting his old apartment and looking into the strange mystery his wife had left behind. She didn’t need to ask. It was apparent all over his face.

“Pigeon!” he called suddenly and, almost like magic, Javier appeared instantly at Fiearius’ side, alert and ready. “What’re we lookin’ at?”

The young man started rattling off information at once. “Final adjustments are being made to the on-board weaponry. Scans of internal operations complete and positive. Beacon docking mechanism is being powered down for takeoff. The Carthian escort is assembled and awaiting your signal. Admiral Gates is already on the line in the bridge. We’ll be ready in a few minutes, on schedule, sir.”

Fiearius nodded, a little impatiently Leta noticed, through Javier’s speech and then gestured towards her. “There’s your answer. Few minutes. Shouldn’t you be–”

No sooner had Corra’s words rung out across the bay did a blur of bushy hair and purple pajamas speed towards the two of them and whole-heartedly attach herself to Fiearius’ legs, nearly tripping him.

“Sorry!” Corra exclaimed, breathless as she ran towards them. “I turned my back for one second and she slipped out.”

“Yeah, she has a habit of doing that,” Fiearius mumbled, ruffling his niece’s hair and trying to pry her grip from him, but she didn’t budge. She buried her face in his pant leg and refused to move even when Fiearius gently shook her. That was when Leta noticed the quiet sounds of sniffling.

“Hey now, iss’yen, what’s the matter?” Fiearius asked, giving up on detaching her that way and crouching instead, giving her no choice but to back away. She continued to sniffle, her head down, so he put two fingers under her chin and lifted it to face him. “You got somethin’ funny on your face.” His thumb wiped a tear from her cheek.

Kalli just looked back at him, water streaming from her eyes, and whispered, “Don’t go.”

If the demand hit Fiearius as harsh in the heartstrings as it hit Leta, he managed to hide it. “Don’t go?” he repeated incredulously. “What’s this? You’re not scared of a little adventure are you? You? Not my fearless little monster.”

“I-I’m not scared,” was Kalli’s defiant retort, but her tone didn’t match the confidence of her words. “But–you have to come back.”

“Of course I will,” Fiearius assured her. “I’ll be back before you know it.”

Kalli’s sniffling lessened and she looked up at him in wide-eyed wonder. “We’re not supposed to swear…”

Fiearius gave her a grin and whispered, as though letting her in on a secret, “Rules are more fun if they’re broken.”

“Oh please don’t tell her that, I still have to watch her for a while,” Corra groaned above them as Fiearius patted Kalli on the head and stood up. With the little girl soothed, she regarded Fiearius herself. “She’s right, y’know. You gotta come back this time. No more of that reckless martyr nonsense, alright?”

“Trust me, I’m totally willing to take this one as easy as I can,” Fiearius promised, absently rubbing the spot on his chest where he’d been shot.

Corra smiled and stepped forward to throw her arms around him in a tight hug. “Just better not be lying to me.”

Corra released him and turned to Leta. “Same with you,” she ordered and before Leta could even respond, she was crushed in a hug of her own. “Safe as possible, alright?”

“Of course,” Leta agreed as over Corra’s shoulder, Addy had arrived in their little cluster and was using her finger to mark a few points on Fiearius’ chest.

“I know you’re not much for religion,” she was saying, “but I strongly believe in stacking the deck anyway, okay? So dov’ha la meni’a si farranus.”

Whether Fiearius believed in whatever Ridellian ritual that was or not, nonetheless he bowed his head to her and replied, “Ta’ini se,” which seemed to satisfy Addy well enough. Before she could step away though, Fiearius had pulled her into a massive bear hug. She laughed and returned the favor.

Finn was next in the train of well wishes, though his came in the form of a pat on Leta’s back, a wide grin and a cheerful, “Don’t die, everybody!” which earned him a nasty glare from Corra and an ever nastier glare from Addy who covered Kalli’s ears.

Finally, there was Cyrus, still wiping ship grease from his hands and looking just as nervous as his brother did, despite not even going on this particular mission. He stood next to Leta and shifted pensively on the balls of his feet, struggling for the right words. Leta hadn’t had the chance to talk to Cyrus about any of this with how fast it was all happening. Now, she kind of wished she had. Once upon a time, he would have done anything to return to Satieri. He would have braved his fear and boarded the Dionysian and flown straight into battle with her crew. But he had to put his family first now and while she didn’t doubt part of him was relieved, she got the feeling another part of him was disappointed.

“Be careful down there,” he muttered at last, locking eyes with his sibling. “Just–be really careful.”

Fiearius smiled back at him, projecting every ounce of confidence and assuredness he’d been lacking a few minutes ago, then reached out and grasped his shoulder in a sort of silent agreement between the two of them. Cyrus didn’t look any more convinced, but he did seem less nervous as Fiearius turned away and called out, “Pigeon, rally the crew, we’re gettin’ outta here!”

Leta released a deep breath she hadn’t realized she’d been holding and pulled Cyrus into a quick embrace, gripped Corra’s hand for another instant, smiled and waved at Addy and Kalli and hurried after the Dionysian’s captain as he climbed up the ramp onto his ship. The small crew piled up behind him and were already going about takeoff preparations before Fiearius even began barking orders.

“Curls, let’s get that ramp up.” He turned one by one to address each of them. “Runaway to the engine room, Harper I want you on artillery, Rhys–just stay out of the way, Pigeon with me–” He finally completed his turn, his finger pointing directly at Leta who, clearly, he wasn’t expecting to be standing there. “Le–what the hell, get to your ship.”

Letat just blinked back at him, clutching her bag at her side and not budging. Fiearius stared back at her patiently, expectantly. The rest of the crew waited, their eyes flicking between the two of them in discomfort.

Eventually, Fiearius got the hint without a single word. He let out a groan and ran his hand down his face. “No,” was all he said.

“No what?” Leta asked, an image of innocence.

“No, this isn’t your ship,” Fiearius growled impatiently before stepping forward, putting his hands on her shoulders and turning her around. “You’re going on one of the Carthian ships to help their medical team.”

“No, I’m not,” Leta responded promptly, turning back around to face him. “I’m going with you.”

He let out another dramatic groan. “Leta.”

“Fiearius,” she shot back without missing a beat. “I’m not letting you do this alone. Do you seriously not remember what happened last time you had to do a mission on your own?”

“T–that was different,” he argued. “It wasn’t recon. And it wasn’t as if someone else being there would have changed anything.” Leta provided him a skeptical frown that made all the point she needed to make. Someone being there couldn’t have stopped Ophelia from getting the best of him and shooting him in the chest? Really? His frown deepened. “It doesn’t matter, I don’t care, you’re not coming with me. I need to do this alone.”

As if he had somehow miraculously won this argument, he turned on his heel and marched away from her, but she was hardly finished.