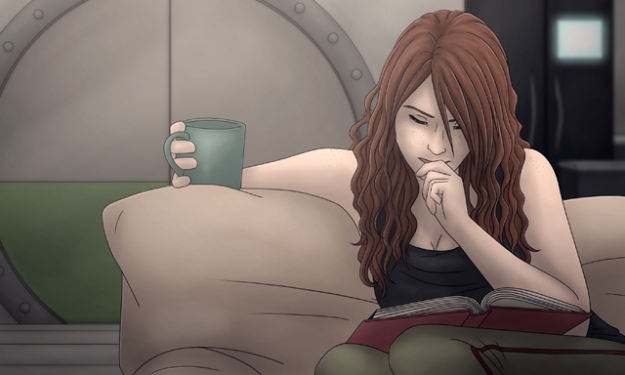 Leta didn’t look up from her book when she heard the knock on the door to her CORS quarters. Liam’s voice from the hall called, “Hey, you around?” and a smile came to her face.

“C’mon in,” she called back. Her eyes quickly scanned over the last few lines of the page as the the door slid open, and Liam collapsed onto the couch beside her. Clearly exhausted, he leaned over and kissed her warmly. Their lips were barely parted when she asked, “So how’d it go?”

Liam frowned, in a thoughtful sort of way, as he laid across the couch and put his feet up over the edge. He’d just come from an interview with Fiearius Soliveré of all people. An interview she herself had set up and then left to its own devices, at her intrepid reporter’s request. Anything could have happened. Her hopes weren’t high.

Which was why she was so surprised when he sighed, as though he himself was surprised by this, “Really well, actually. I don’t know what you said to him, but it went great. He gave me a lot of really good material. My editor will be thrilled.” He stretched across the couch, laying down so his head was in her lap.

“That’s … a surprise,” she said, her fingers catching through his hair. His eyes closed, and clearly he was settling in to rest, but Leta could not help but ask, “So can I hear it?”

“Hear it? It’s just unedited interview, don’t you want to wait until I write it? It’ll be much more interesting, I promise.”

“Of course I’ll read it. But I want to hear the whole thing.”

Liam cracked open his eyes, surveying her curiously before he reached into his pocket and pulled out the tiny sleek recorder, turning it over in his fingers. “Well…”

“I might have some insight to help contextualize it,” she added. “You can’t just tell me you got a ton of good material and then not let me hear it.”

“You have to listen to it again anyway to get started.” She shuffled closer to him and gently reached over to put her fingers around the recorder. And tugged. He resisted. “I’ll just listen with you.”

Liam looked down at the recorder and then up at her. Leta provided him her best convincing smile and tugged at the device again. This time, he let it slip out of his grip. “You always get your way, don’t you?” he asked, but his voice was affectionate. “Alright. Let me just get something to take notes on.”

As he lifted off the couch to go retrieve the tablet he’d left in her bedroom, Leta couldn’t help but grin victoriously at the tiny recorder. It was only fair, she thought. She’d set the thing up, why not see how it turned out? And of course she wanted to experience the work of someone she cared about in action, even if indirectly. Not to mention, it was only natural to be curious about Fiearius’ responses to Liam’s questioning as he so rarely gave a straight answer to anything. Listening was a no-brainer.

Liam returned from the bedroom, tablet in hand and Leta didn’t even wait for him to sit down before she pressed play.

“Alright!” said Liam as he slid the small silver recorder onto the table between them. “I should just say, thank you again for agreeing to this. I really appreciate you taking the time. Let’s get started then?”

There was a lapse of silence as Fiearius tapped his fingers against the chair arm. “Okay,”

“I’m not sure what Leta told you, but what I want is to tell the story of how you came to be–well, you. Admiral of your own fleet in a Span-wide war. What lead to this moment, how did you get here?”

A smile pulled across Liam’s face, slow and strained. “Maybe we should just start at the beginning. You grew up on Satieri.” He dropped a notebook on the table, pen in hand as he wrote a few words. “What was that like?”

The pen paused. “Let’s talk about your family,” Liam tried again. “Your brother, Cyrus, has obviously been a pretty prominent figure in some circles. His contributions to energy conservation in the ship-building industry and now New Genisi have been vast.”

“You must be proud.” Liam waited. And waited. But whatever continuation he was expecting never happened. He prompted, “Did you two get along as kids?”

Liam squinted at him. “What about your parents?”

There was much more hesitation in Fiearius’ second answer. “Sometimes.”

Liam sighed. Whether Fiearius was being withholding out of reluctance for this particular subject or simply out of stubbornness, it was clear this tactic was not going to work. So he tried something else. “The Society is a prominent force on Satieri. Describe what that looked like. Did it affect your growing up at all?”

For the first time since the recorder had been turned on, Fiearius displayed interest. He was paying attention. “Sort of,” was his initial answer before falling into silence again. But this time, when Liam waited for a continuation, it paid off. “When you’re a kid, you don’t really notice much, y’know? But the Society — well it’s always a consistent force in the background. Something you don’t necessarily notice all the time, but you always know it’s there.”

Liam shuffled forward in his seat. He grasped at the thread, desperate to keep it going. “And what did that mean for you? As a child. Knowing it’s there.”

“Not a heck of a lot. It’s something the adults talked about fleetingly. How the latest election was rigged. How someone who called it out disappeared. Mostly just a vague sense of threat that if you did something wrong, you’d disappear too.”

“So the Society meant fear.”

“For a long time, yeah,” Fiearius admitted. “My father would mention stories at the dinner table, my mother would tell him to shush, it was just kind of — generally menacing, y’know?”

Liam murmured his understanding. “You’ve said before that you voluntarily joined the Society at –” He shuffled his papers. “– sixteen, was it?”

“Fourteen,” Fiearius corrected. “Fourteen, I joined as a recruit. Sixteen was when I left home and took it up full-time. When I stopped seeing them as the big baddies though? Gods, I must have been — twelve? It was when Dez–.”

“That’s the one,” Fiearius agreed. “He was my best friend at the time. We were constantly getting into trouble together. Robbing places, trashing stuff, shitty kid things, the usual. My father would try and pull the ‘Society’s gonna get ya’ card to stop me, but by that point, we’d done so much damage and nothing had come of it, I wasn’t buying the bogeyman story anymore. I thought we were invincible.”

“As luck would have it, we were.” Fiearius laughed bitterly. “There was one day, after we’d ditched school and spent the hours sneaking into movies and stealing snacks from convenience stores, we went back to Dez’s place. His older brothers had just gotten home too, covered in blood. Freaked me out, but Dez acted like it was nothing. It wasn’t their blood, he said. Things would be fine. They were part of the Society. And they were the reasons no one could ever touch us.”

Liam leaned forward, intrigued. “Did his brothers actively get you out of trouble or was it sort of an unspoken thing?”

“A bit of both. The Cordovas were widely known for their Society attachments I guess. Certainly explained why my mother didn’t like me hanging around their place. But if people forgot, they were sure to remind them.”

“So was that the moment you decided you wanted to be a part of the Society as well?”

Fiearius shook his head. “Not just then, no. I was fine reaping the benefits of others’ work for a while. But my view of them changed. They stopped being this scary malevolent beast and became something more…practical. Sensible, even. Dez’s brothers had joined because the family was down on their luck. I started to recognize the Society for what they were and probably still are for a lot of misled teenagers.” He shrugged. “Refuge.”

“Sure. When things are shit, joining the Society is an easy way out. They’ll take you in, give you a place to live, they’ll train you to do a job, they’ll place you and suddenly you’re treated like a king. No one can mess with you, no one can tell you what to do. It’s easy access power. Or–well, illusion of power. But when you’re 16, you ain’t questionin’ that.”

“And that’s why you joined?”

“Absolutely. I think it’s why most people join.”

“If that’s true,” Liam began slowly. “If the Society is built upon the backs of — “

“Sure. That just doesn’t sound like the kind of organization that could do the kinds of things they’ve done.”

“Why not? Scared teenagers grow up into paranoid adults. The Society itself, as an organization, was created to solve a problem, wasn’t it?”