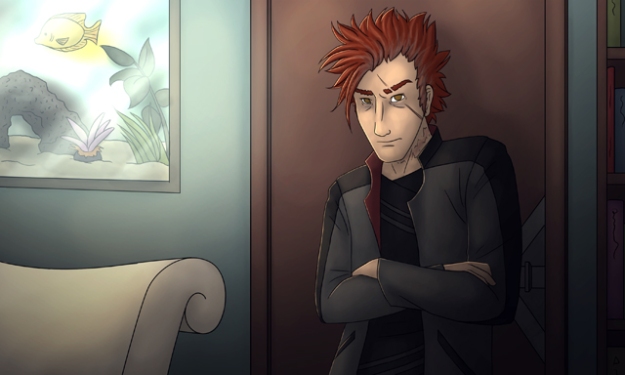 “You were right,” Fiearius grunted, leaning against the heavy bolted door with his arms crossed. He scowled. “I don’t like this plan.”

Leta just shook her head, not looking up from the book she paged through as she sat lounged in a plush red armchair with her feet up. Beside her sat Admiral Gates, smoking from a cigar and looking like he was enjoying his evening, as odd as it had turned out.

“Why not, Admiral?” he asked, smirking through an exhale of smoke. “I thought you were just dying to get away from the party.”

True enough, that was the one positive effect of Leta’s idea. But the idea of waiting it out hidden in this mansion’s incredibly well-furnished underground panic room until the danger of the supposed assassin upstairs passed was obviously not Fiearius’ kind of plan. For a man who lived on the cramped Dionysian, he didn’t seem very comfortable in other confined spaces.

“I was,” Fiearius growled, his fingers tensing against his arms before he pushed himself from the door and started pacing across the carpeted floors. “But we’ve been down here an hour. Nothing has happened, nothing’s gone wrong at the party. What are we even waiting for?”

“You know what we’re waiting for,” Leta reminded, trying to keep her patience.

“We have to wait for dessert to be finished, yes?” Gates muttered absently, who did not seem to find an assassination attempt particularly surprising or worrisome. When they had approached him in the ballroom and insisted he come with them or something terrible might happen, Gates had treated them as though they’d just asked him to play a game of cards instead of save his life. “Happens more than I care to admit,” he’d sighed in amusement as they descended the stairs to their temporary prison.

“The assassin was supposed to do the deed before dessert, right,” Leta agreed, “but–”

“‘Before dessert’ was ages ago,” Fiearius cut her off, running a tense hand through his hair and gripping the edge of a desk with the other.

“–but we’re going to wait it out a little longer,” Leta continued. “To be safe.”

The desk made a dull thump as Fiearius slammed it back against the wall. “I don’t like this.”

“So you’ve mentioned,” mumbled Gates, now uncorking a glass decanter he’d found on the table and sniffing the bottle with interest.

“I don’t like hiding like some coward,” Fiearius said. “If someone wants to kill me, fine, but I want to look ‘em in the eye when they try it. I want to know the face of my enemy,” he went on, gripped by some unbearable passion or perhaps just unextinguishable boredom. It was often hard to tell with Fiearius. “I want to meet them head on. I want — ”

“Leta,” Gates interrupted suddenly, looking over at her. He corked the decanter and set it aside. “Since we’re here regardless, I’ve been meaning to ask you about your foreseeable plans in the upcoming days.”

Sparing only a quick glance at Fiearius to take in the wonderfully dumbstruck look on his face, Leta answered, “To be honest, I’m not quite sure. Vescent doesn’t seem like the best place for me right now and my clinic, if Nikkolai is to be believed, is running just fine in my absence. I’ll probably stay on as the physician aboard the Dionysian for a time, if for no other reason than to spare anyone from the Carthian med teams the task.” She glanced meaningfully at the ship’s captain who rolled his eyes.

“Half of those stories are made up.”

She raised her eyebrows pointedly. “Which means half are true.”

Gates was nodding, his fingers laced together under his chin. “A noble sacrifice, I’m sure,” he said at last. “Well I certainly don’t intend to take you from the important and impossible task of keeping the Dionysian flying, but it’s good to hear you’ll be close by because we might have another significant need for you.” Leta frowned at him curiously and he asked, “Tell me, have you been to Ellegy?”

“Uh–yes, I have,” she answered, voice full of questioning. “My dad did a lot of work in the capital city. My family had property there, we used to visit every other summer, sometimes more.”

“That’s what I thought. Well. As I’m sure you’re aware, Ellegy is the natural next step in the war. So far, we’ve only managed to claim small victories that do us little good in the overall scheme of things. But Ellegy? The great, powerful Ellegy? Rich in resources, technology and wealth? Not to mention, the known location of one of our own assassin’s targets.” He gestured towards Fiearius. “If we can take Ellegy, we’ll finally be in a good position to start ending this war.”

Leta couldn’t disagree. Ellegy and Satieri were the Society’s two giants. They’d fortified them beyond penetration since before the bullets even started flying. Losing just one would be devastating to the whole Society structure and Leta had known for a long time that, with Ascendia finally calming down in Carthis’ favor, Ellegy was on the horizon. But that still left a gaping question.

Gates’ mouth twisted into a smirk. “Ellegy has always blocked Carthian citizens from entering their borders. They certainly don’t allow space pirates to saunter in either. Not a single person in our strategy meetings has ever set foot on the planet. But you? You have.”

A nervous half-chuckle escaped Leta’s lips. “Ages ago. When I was a child, a teenager maybe, but–I mostly just stayed on my parent’s property. Maybe hung out with some of the neighbor kids, played in the park, I don’t know anything of any value.”

“Perhaps not,” Gates admitted. “But you may know more than you think and regardless, as a citizen of the Ellegian cluster if not Ellegy itself, you have a perspective that none of us do. I don’t expect you to be an expert, but if you have any fraction of insight that could help us plan the largest attack we’ve made so far, I want you in those meetings. If you’re willing.”

Startled, Leta looked over at Fiearius, having almost forgotten he was in the room. He was eyeing Gates, face full of suspicion. “Why the hell do we need her for that?”

“No no, you don’t understand–” Fiearius said quickly. “Not saying you shouldn’t help, you should, we do need you, but not for that. The specific thing. The knowledge of Ellegy thing.” His apologetic expression snapped back to confused anger when he swung his attention back to Gates. “Because we have experts. People who’ve always lived on Ellegy. On the ground. Currently.”

Leta looked between the two of them, but Gates had looked away. “Ah,” he said quietly, not meeting anyone’s eyes. “Right.”

“The rebels?” Leta filled in on her own, turning to Fiearius when Gates didn’t answer. “The Ellegian rebels you told me you were in contact with.”

“Yeah, those rebels,” Fiearius confirmed, sitting down in a chair across from them. “Who know a lot more useful intel about Ellegy than you do. No offense.”