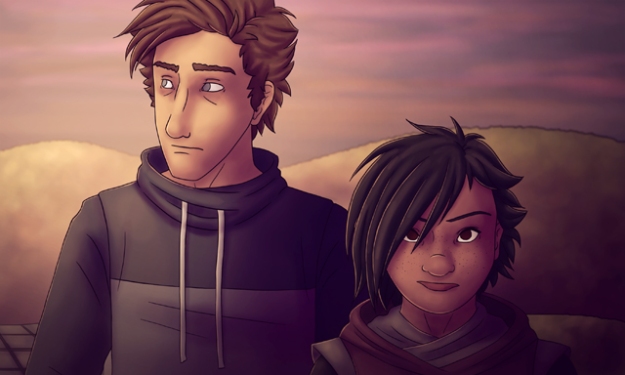 As Corra stepped up to the front door of Eriaas Argoatan’s mansion and pushed the COMM button, she was struck with an old familiar thought: she never should have listened to Finn. She shouldn’t have boarded the Beacon. She shouldn’t have allowed him to talk her into ‘just saying hello.’ And yet, simultaneously, this was exactly the reason she was glad that she had.

Up until now, Corra had done just fine assuming that her friends and loved ones were capable of taking care of themselves. She had to, else she’d be sick with worry every minute of every day. The crews of the Dionysian and the Beacon had terrible tendencies to get themselves into constant trouble, but she always reminded herself that they also had the tenacity to get themselves out of it.

But now that she knew about Cyrus and Addy trapped on some Society-occupied moon, she couldn’t stop herself from getting involved.

Finn stood at her side, glancing over his shoulder at the cluster of agents that, for all intents and purposes, seemed to be digging a giant hole in the ground.

“Any thoughts on what they’re up to?” he muttered to her, sounding amused, and Corra shook her head.

Then, a smooth, cool voice rose out of the speaker. “Residence of Eriaas Argoatan, how may I assist you?”

“Erm — hi,” Corra greeted, mentally preparing to launch into the elaborate lie she’d plotted out this morning. They were a young couple looking to hire an architect, the same architect that had built this very house. They’d asked to see his work, he’d offered to show them the Argoatan house. Oh? They hadn’t been in touch for years? Well that’s strange. He’d promised to meet them here. Would he mind if they looked around briefly anyway? Oh thank you so much, we really appreciate it, the place is gorgeous from the outside.

But Corra, as it turned out, didn’t need the lie. As soon as she opened her mouth and began, “We’re–” the door swung open.

“Cousin Markis!” cried the man on the other side of it, throwing his hands out dramatically and then seizing Finn in a hug. Finn cast Corra a look of alarm, awkwardly patting the man on the back.

Releasing Finn at last, the stranger turned to Corra. “And Palai!” She received a hug of her own. “It’s so good to see you! Come in, come in!”

Alyx had implied that Eriaas Argoatan would be on their side once he knew why they were there, but Corra hadn’t anticipated him knowing right away. And she certainly wouldn’t have expected him to come up with his own cover story for them. Though, as he ushered them inside the grand foyer, she couldn’t help but internally grumble about it.

Still, she put on her best smile and pretended to know the man as he walked them further into the house where, to her mild dismay, more Society agents were milling about. Addy hadn’t been kidding: they really were trapped here.

“–you know, her little redheaded boy. Getting so big these days, you wouldn’t believe it.”  Eriaas was saying about somebody, presumably someone a cousin might know as they passed a particularly intriguing room where a number of agents were clustered around a table pointing at a screen Corra couldn’t quite see. She careened her head to try and get another angle.

It didn’t matter, probably, Corra knew. Not to her mission anyway. But for some reason she just really wanted to know what was on that screen or, better yet, what was in that hole.

Suddenly, she felt Finn’s elbow nudge her shoulder. She looked up in alarm as he laughed on cue and said, “Runs in the family, I guess,” before tilting his eyes away from the room in indication.

Fortunately, the upstairs part of the house seemed to be Society-free. So much so that Eriaas dropped the act.

“I’m glad you’re here,” he was saying, dropping down to a whisper. “They’re safe enough for now, but there’s just too much risk, especially with the little one. I’d much rather get them out of here.” He glanced over his shoulder at them. “You are here to get them out of here, right?”

“So there is a plan?” Eriaas asked as he lead them up another set of stairs. Were they really hiding up in the attic? “I didn’t even see your ship out there. How exactly are you going to get them past the Society presence without anyone noticing? I’ve gone over it with them probably a thousand times, we were never able to figure out a foolproof method.”

“Don’t worry,” answered Corra, her tone a little grim. “Sneaking people out of places they don’t want to be is my specialty.”

“Oh? Is that so?” Eriaas regarded her with interest, but he did not press her further. Instead, he knocked twice on a door and pushed it open.

Through all of the whirlwind of the past couple days with Finn, on the Beacon and now here, Corra had barely a half moment to consider anything but the immediate task at hand. She had known she needed to help Cyrus and Addy from the moment Alyx mentioned their plight, but she hadn’t once considered what that meant. Not even for a second had she thought to wonder how she would feel upon opening that attic door and peering inside to see two of her dearest friends in the flesh for the first time in years. She hadn’t realized that her heart would stop beating when she saw the tall blonde woman pacing back and forth impatiently or that her breath would catch in her throat at the sight of Cyrus sitting on the edge of his seat, his eyes fixed on the door. Above it all, she certainly hadn’t thought about the tears that started to well in the corner of her eyes at the sight of a little girl, the spitting image of both of them, attached to her father’s legs and staring up at the newcomers wide-eyed.

Hastily, Corra wiped her eyes with her sleeve.

“Finn,” Addy breathed in relief, already across the room and wrapping her arms around the man in a short squeeze. But her eyes weren’t on him. Her attention was, quite distinctly, on Corra who, not for the first time lately, felt an unpleasant blend of joy and absolute shame.

Slowly, Addy let go of Finn and nudged him aside til she could get a better look at the other arrival. Finding herself more nervous than anything, Corra tucked a few strands of hair behind her ear, her eyes lingering somewhere between Addy’s stare and the wall past her shoulder. Corra and Addy had been close once, as shipmates. And then, right as Addy’s life had started to change in huge, dramatic ways, Corra had abandoned her. It wasn’t something she was proud of and she wouldn’t blame Addy for hating her.

But after a few moments of lengthy silence, hate didn’t even seem to be on the table. Addy’s eyes suddenly welled up with tears and she threw herself at Corra, wrapping her arms around her old friend’s shoulders and squeezing so hard Corra lost her breath. And a bit of her composure.

Wiping her eyes again as Addy stepped back, Corra laughed a little and glanced over her shoulder where Cyrus had stood from his seat and was smiling at her just the way she remembered him smiling. That half-smirk she hadn’t even realized she’d missed. Her best friend for so many years, so different now yet still the same dork she’d always known. Now just a dork with a little girl at his feet.

“Kalli, you need to meet someone,” he told her, gently pushing the curly-haired child forward. Kalli looked up at Corra with Addy’s eyes and Cyrus’ wonder. “This is your a’iya Corra.”

Still fighting tears (god, how many times had she had promised herself she wouldn’t do this), Corra leaned down to look the little girl in the eye as she said, “Hi, Kalli. It’s so nice to finally meet you.”

Kalli glanced back at her father, then her mother, who nodded once, and then grinned widely and seized Corra’s hand in both of hers. “A’iya!” she exclaimed, bouncing up and down in excitement.