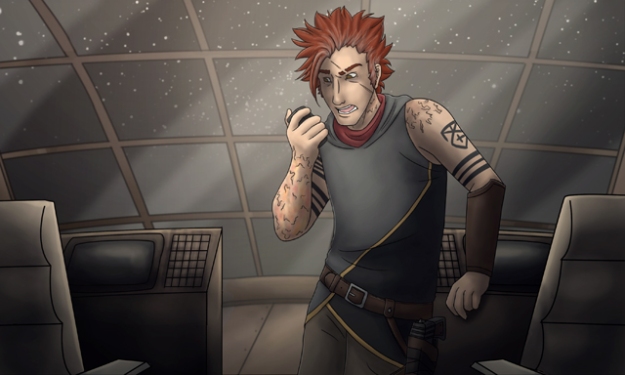 Worry settled in Leta’s stomach like a rock as she crested the stairs toward the Dionysian’s bridge. She knew she’d find Fiearius inside. When she heard his voice, she hung back in the doorway to listen.

“No. No way,” Fiearius was saying, his voice ice cold. “I’m turning the ship around and coming back.”

“You sure as hell aren’t,” Cyrus’ voice answered, breaking through the crackling COMM speaker. Even through the COMM device, Leta thought he sounded, somehow, very far away — unreachable. Her stomach turned over again. “What’s gonna happen if you land the Dionysian here?” he went on. “There are Society agents all over the place.”

“All the more reason to come back and get you!” Fiearius growled, and Leta heard a thud — his fist meeting the wall. This was exactly what Leta didn’t want to happen: not only was Cyrus and his family in danger, but it was compromising Fiearius. Any minute now, the Dionysian would set down on a remote Ascendian moon to begin hunting down their first Society Councillor. If Fiearius was going to survive this, he needed to be at his best.

She stepped through the doorway, watching Fiearius pace the floor with one hand knotted tightly into his hair. He was anything but focused.

“Fiearius, you can’t and you know it.” It was Addy’s voice now. “Look, we’re okay here, really. We’re staying hidden and we’ll continue to stay hidden until they’re gone. You don’t need to worry.”

“If you didn’t want me to worry, you wouldn’t have told me,” Fiearius snapped. He glanced sideways and met Leta’s gaze — distress filled his eyes — then jerked his head sideways, gesturing for her to come in.

“It was Addy’s idea,” Cyrus muttered through the speaker. Leta leaned against the back of the co-pilot’s chair, crossing her arms over her chest.

“We told you because we wanted you to know we’re safe,” Addy intervened, a note of scolding in her voice. “And I promise that if that appears to be changing, we’ll let you know, but for now, we’re just going to hide upstairs, out of sight and you go on with your mission. They’re not interested in us. They’re focused on their own expedition. We’ll be fine.”

Fiearius growled in his throat but dropped his back against the dashboard, pressing the heel of his hand against his eye. “I’m not okay with this.”

“Well you’re gonna have to be,” said Cyrus. “Take care of yourself, alright? You have your own job to do. We can handle this.”

“We’ll be in touch,” Addy finished. The speaker cackled and went silent.

Clenching his jaw, Fiearius stared down at the COMM receiver in his hand, his fingers wrapped tight around it as though he was considering crushing the thing in his frustration. His breath was quavering and his stance was tense, but finally, he heaved in a deep breath, got a hold of himself and looked up to Leta to explain, “They’re–”

“I know,” she interrupted, and his brow knit together in sudden surprise. “They called me first. Wanted me to be here to make sure you took it okay.”

Fiearius regarded her closely, his chest still rising and falling in great effort. She could see the tendons in his hand. He said nothing.

Carefully, she eased a step towards him and reached out to pry his fingers away from the COMM device he still seemed determined to throttle. She half-expected him to rip his hand away, but he didn’t fight it when she circled her fingers around his wrist. “Are you alright?” she asked quietly.

“No,” was his immediate response.

Leta carefully replaced the COMM on the dashboard. With her other hand, she tightened her grip at his wrist.

“How the hell do they expect me to–” he began, his voice quiet but laboriously so. “How am I supposed to–” He locked eyes with her and she was crushed to see real genuine fear there. “I can’t leave them there. If something happens — ”

“I know,” said Leta quietly. “I know, but Fiear, they’re right. It’s more dangerous for you and for them if you go back. You have to just trust them. Trust their judgment. If they believe they’re in the clear, then you have to believe that too.”

“And you believe that?”

Leta’s mouth went dry. In truth, she was combating the burning impulse to turn the Dionysian around herself and single-handedly retrieve them. But it wouldn’t help — Cyrus and Addy were too close to danger; the Dionysian couldn’t interfere.

“They can handle this,” said Leta at last. “Think who they are. Cyrus and Addy, they’re smart. Logical. Unlike us.” She forced a smirk. “They won’t do anything stupid. Especially with — ”

“– Kalli,” Fiearius finished, but he wasn’t relieved. Mentioning his niece’s name was the wrong move: Fiearius’ face darkened, and his hand slipped away from Leta’s as he turned around, pacing a few steps away.

“I don’t make choices like this,” he growled, stalking to the wall and then spinning around and stalking back. “I don’t–missions do not come before — Cyrus and Addy and Kalli and you and this ship? Those are my priorities.” He headed back towards the wall. “This? This.” He waved his hand vaguely at the window. “This isn’t it. This isn’t me. I can’t–”

Suddenly, he froze in place and stared with empty eyes at the dashboard. “They’ll be tortured,” he said shortly after a moment, his voice detached. “If they’re found.”

Leta knew he was right. She didn’t need to say so. Instead, she said the first two words she could think of, which were, “Come here.”

Fiearius pulled his hand down his face, then regarded her uneasily.

“Come here,” she said again, and Fiearius glanced over his shoulder as though expecting someone else to come in and counter the order, but then he half-walked, half-wandered closer to where she stood. It was sort of unbelievable, Leta thought, how they still oriented toward one another after all these years: she raised her hands to hold the back of his elbows, and his hands lifted to her hips, and they were drawn closer together in a loose embrace.

“They’re going to be alright, Fiear.”

A heavy sigh exhaled from his lungs, and then he leaned his forehead against hers. “Yeah,” was all he said, under his breath.

She squeezed the small of his back once before taking a step back and letting go. “Are you ready?”

“Ready enough,” he said, and he reached for his gun from the dashboard, shoving it into its holster. “Not sure how ready to murder someone I want to be, after I swore I wouldn’t do this kinda thing anymore…”

Leta’s stomach squirmed. Not murdering people was a creed Leta could easily get behind. Fiearius’ past employment whether it be under the Society or his freelance hits after the fact had never sat well with her. From what she’d observed — the way he detached from the world after a job, the way he grew quiet at the mention of it, the way he couldn’t talk about death or loss without retreating within himself — they didn’t sit well with him either.

But this — this wasn’t an assassination like those he was used to. This was a strategic move, or so Leta had convinced herself. Killing a Society Councillor wasn’t the same as killing a person. It was killing an idea. One by one. And she would keep telling herself and Fiearius that if she had to.

“I feel the same way,” she said evenly. “But this is important. And at least you know she’s not innocent.”

Fiearius let out a grim laugh. “Nobody’s innocent,” he said. Before she could respond, he added,“I should go find Dez and get ready if we want to stay on schedule.”

Leta nodded, but hesitation came to her face.

“And you’re truly, really sure about Dez,” she said. “You’re sure you want to take him. The person who has betrayed you over and over again. Instead of someone you could trust. Eve, or — ”

Predictably, Fiearius was already shaking his head. “Eve’s great, but not the best strategist on her feet. Dez and I–this is what we’re good at. I need him.”