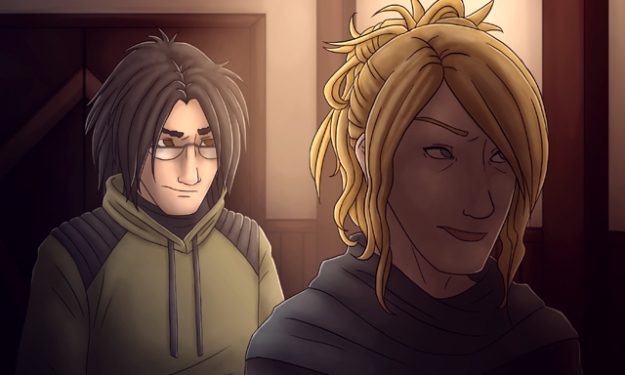 The dinner hadn’t gone horribly. At least from an investment perspective.

But Addy was not at all sorry to see the evening come to a close. After their host Eriaas had insisted on wine, then dessert, then more wine to cap off the night, she and Cyrus had managed to escape. Eriaas — or more likely, Eriaas’ staff — had arranged for them to sleep in the guest rooms upstairs. Kalli had dozed off in Cyrus’ arms, and Addy knew this was the only reason why they managed to hold off shouting at one another.

As soon as they put Kalli to bed and retreated into the hallway, however, all bets were off. Right as Addy pulled the door closed, she turned to Cyrus.

“Cyrus, I can’t believe — ” but he cut her off, his voice a harsh whisper.

“Did you have to act like that in front of our daughter?”

“Excuse me?” Addy’s voice was low, but sharp. “Act like what, exactly?”

“You know exactly what I mean.”

But Addy rolled her eyes and took a few steps away from him. “I don’t. If anyone should be apologizing, it’s you.”

Disbelief rose in his eyes as he followed her down the hallway. “Me? Me?”

“Yes, you,” Addy snapped, still forcing her voice to be hushed. She didn’t need Eriaas or anyone else for that matter overhearing this. “I’ve never been so embarrassed in my life.” She gestured towards the stairs they’d just come up. “You acted like a child down there. More so than our actual child. This man is an important investor, he was gracious enough to welcome us into his home and he’s going to help with New Genisi and yet you, for some reason, felt the need to throw a fit every few minutes because you weren’t getting enough attention.”

Cyrus scoffed. “I did not throw a fit.”

“You accused him of not actually caring about his projects, you insulted his taste in wine, when he asked about our future plans, you told him I don’t even like Archeti and can’t wait to leave,” she listed off. “Why would you say that?!”

Her hands flew into the air in exasperation. “I’m honestly surprised he didn’t change his mind and kick us out with how you were acting.”

“Of course he didn’t. Why would he, with how you were acting?” Cyrus’ eyes narrowed. “Why kick us out when he’s got a beautiful girl charmed by his every word?”

So it went back to this. Again. “And here we go,” Addy groaned. “How many times do I have to tell you, I was playing along, Cyrus, because we need his help. It’s a tactic, what’s so hard to understand about this?”

“Spare me,” Cyrus snapped. “It’s not just a tactic. I’ve seen you pretend to be charmed and it doesn’t look like that.”

Addy wanted to refute, to argue, but something in equal parts made her not want to bother. “Fine. Maybe I was charmed. Maybe it’s nice to be treated with respect for once.”

“But why are you so damn jealous, Cy?” Addy demanded, cutting him off. “For the gods’ sakes, you can’t honestly think I want to be with that man. I have a child with you.”

“Right,” Cyrus agreed, his tone venomous as he added, “So you’re obligated to stay with me.”

Okay, so she may have walked right into that one. Still, she shook her head and growled, “That’s not what I meant and you–”

“True though, right? You would never leave Kalli and neither would I, so you’re kind of stuck with me now, aren’t you?”

“If it weren’t for her, would you still be here?”

Addy opened her mouth, fully poised to debate the issue, but suddenly she clamped it shut again. No, she wouldn’t fall into his trap of self-deprecation. Not again. It would be easier, sure, telling him he was crazy, telling him she loved him so that he could argue that she doesn’t, she couldn’t, he doesn’t deserve her. Then she would insist otherwise, they’d embrace and the issue would be dropped. It’s what Cyrus wanted. Reassurance. But this time, for once, she wasn’t going to give it to him.

“You just love to play the victim, don’t you?” Addy growled, setting her eyes on him firmly.

“Every time,” she went on, barely able to keep her voice in a whisper now. “It’s that I neglected you, I’m not on your side, I would be elsewhere if it weren’t for Kalli, what about you? What have you done to fix our relationship besides complain and try and guilt me about it?”

“Wha–” Cyrus sputtered, but quickly regained his composure. “I didn’t break it to begin with!”

Addy could hardly believe her ears. This time, she was so stunned, she couldn’t even find words to respond with. Fortunately it only took Cyrus a moment to realize what he’d said and she saw the regret pass over his face. “I mean–not to say that I’m blameless,” he hurriedly backpedaled.

Addy couldn’t help herself. She let out a sharp laugh. “Damn right you’re not blameless,” she snapped. “Sure, okay, I flirt with Eriaas a little bit. I know it makes you uncomfortable. He’d probably give us the money regardless. And I do it anyway. I’ll admit that. But you know why I do it?” She took a strong step towards him and he recoiled backwards. “Because you never flirt with me. What is it, Cy, we have a daughter, we live together, you don’t have to invest any effort anymore? The hard part’s over, you just expect to go on happily with your prize and that’s it? That’s not how this works, Cyrus!”

“I never said it did!” was his instant response, though he looked more than a little shell-shocked. “And I don’t expect anything like that. You wanna talk about flirting? Really? Who of us is more romantic? Who of us plans nice dinners? Who buys flowers? Who initiates everything?”

“You do,” Addy admitted, “But all those things? They’re only about you! The romance? Only because you’re feeling insecure and you want some physical affirmation from me that we’re okay. The dinners? Gods, you’ve made things I don’t even like, you’re just trying to hit points on a checklist. And the flowers?” She threw her arms to either side of her. “Cyrus, I have allergies!”

“At least I’m trying,” Cyrus growled. “At least I do something. When was the last time you tried anything? Maybe I wouldn’t need so much reassurance if you gave me any hint that you even liked me anymore.”

Addy just let out a sigh. “Oh not this again.”