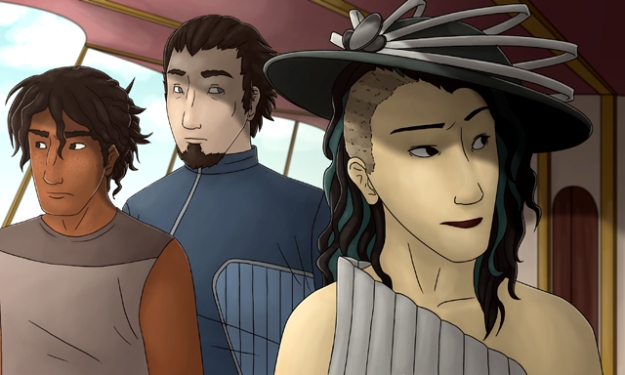 When Alyx had suggested stealing a ship, this wasn’t what she’d had in mind. She’d pictured a clandestine deal in the black of night, in an alley, amongst whispers and hurried footsteps. That’s usually how it went.

But this could not have been more different. Sweating beneath the summer heat of an Ellegian moon, she adjusted the skirt of her high-fashion dress. An elaborate hat that cost more than a small ship shaded her face. Ridiculous as she thought it looked, Cai, who had attended many of these events during his time as an Ellegian ally, had been correct in assuring her it was a necessity to blend in. They’d only been at the 1868 Lars Technologies Preview and Demonstration for ten minutes and already she’d seen an array of headwear that deserved far more fascination than the ships performing tricks out in the arena.

Cai himself was tagging along behind as she gradually lead the way through the throngs of mingling socialites in the grandstand. Unlike her and Daelen who strode by her side, he wasn’t dressed in Ellegian finery, but the dull garb of those that flitted between the guests serving drinks, offering food, attending to the inevitable moments when one woman’s hat got caught in another’s and generally blending into the background. And he wasn’t very happy about it.

“Do I always have to play the ally?” he grumbled under his breath, quiet enough that only they could hear.

Alyx glanced back at him and tilted her head. He’d expressed his dissatisfaction with that particular part of the plan from the get-go, asking if he could instead play the part of the husband or brother or even the estranged cousin. She couldn’t blame him for finding the notion unappealing, but as bad as Alyx felt about it, the logic was infallible. Which he surely realized as she unintentionally stared at his cropped ear.

“Sorry, Cai, but–” she began but he cut her off with a sigh.

“Yeah, yeah, I know, need someone to check behind the scenes, I get it,” he mumbled, clearly irritated.

Alyx shared a glance with Daelen who just grimaced and shrugged. “Hey,” she said, cracking him an apologetic smirk. “Next time you can wear the hat, I promise.” He eyed her for a moment and then returned a smirk of his own.

“I’m holding you to that,” he mused. “But in the meantime, I’ll go sniffing around out back.”

“And we’ll see if we can hunt down this Ranson Lars fellow,” said Daelen.

“Stay safe,” Alyx told Cai who just laughed off her worry and disappeared into the crowd with expert skill. Then she turned back to Daelen and took a deep breath. “Shall we, Mr. Orsada?”

“Of course, Ms. Orsada,” Daelen replied, dutifully taking her arm and strolling onwards. As they walked, Alyx scanned the face of every dully-dressed serving girl they passed. She’d just wanted to steal a ship to pay for the Beacon’s fuel. And yet here she was, dressed to the nines searching for Corra. She could only hope Finn was carrying out his end of the bargain.

Far from his companions in the grandstands, Finn slipped through the ship hangar toward his target. Excitement outside was mounting as ships zoomed through the air in spectacular feats of piloting, the crowd was roaring in the distance — no one was watching as he crested the metal ramp of a ship and boarded the vessel like he owned it.

Which, if this all went to plan, he soon would.

The ship was small, a convenient state-of-the-art transport vessel. It had no cargo bay to speak of, just seats lining every hallway, and it probably held twenty people total, compared to the Beacon’s two-hundred. But it was a beautiful little bird, fitted with the highest tech on the market, fast, and all slick silver metal, which Finn admired as he strode down the hallway toward what would soon be his bridge. Alyx wanted him to steal a ship to sell off on the black market? This one would certainly fetch a high price.

In the bridge, the poor, unsuspecting pilot was readying for her performance. Seated in the captain’s chair, she had one hand on the COMM button, and the other adjusting dials.

“Checking in, this is Allerion 2, ready for take off.”

“Confirmed Allerion,” said a voice on the other end of the line. “Cue coming in 30. Remember to stay in formation with Pyka’s 3 and 4.”

But before she could finish the message, Finn crossed through the room, hit the dial to silence the call, and pulled the gun off of his hip.

“Sorry, mate, but hand over the ship,” he growled, resisting the urge to smirk — this hadn’t lost his fun.  “And I won’t pull the trigger.”

The end of his gun was centered at the woman’s forehead. Her mouth fell open in shock.

“W — Who the hell are you?” she breathed, standing up to her feet.

“The man who’ll be taking over this flight if that’s alright by you,” he answered simply. “And for your sake, I hope it is.”

In a shaky voice she breathed, “Just — fuck — alright, take it. I don’t get paid enough for this.”

“I figured as much,” Finn said agreeably. He jerked his head amicably toward the back of the cockpit, indicating she move away, though he didn’t pull the gun from her forehead just yet. “Back off, alright? Nice and easy and I won’t have to blow your head off — oh, and give me your jacket, would ya?” he added, as casually as if they were trading clothes for fun.

Wide-eyed, the woman shakily slipped the jet black pilot’s jacket off of her shoulders. Holding up her palms in surrender, she backed away from the bridge just as Finn shrugged on the jacket and dropped into the chair. Now he really looked the part.

It wasn’t the first ship Finn had ever stolen, but it was certainly the prettiest. And the newest. He hadn’t seen a control panel like this — well, ever. He stared at it in silence for a few moments, his eyes searching over the controls for some semblance of familiarity. “Right….” he muttered again, scrunching his face in concentration.

After a moment, he felt his unfortunate guest’s eyes on the back of his head, but when he spared her a glance over his shoulder, she was looking straight past him out the window at a green light that had flicked on above the open hangar door.

“That was your cue,” she pointed out, sounding a little bitter. “You missed it.”

Finn frowned at her. And frowned at the light. And then frowned back at the control panel.

Finally, she said, “It’s the blue switch. There? On the left? That’s what you’re looking for.”

It was, he realized, as he reached over and flipped the switch, causing the whole ship to hum as the engines began to rev up. “Thanks,” he mumbled, not feeling very thankful as he took hold of the steering and lifted the ship off the ground with ease.

“You’re welcome,” she answered. And then a moment later, “You’re not very good at this, are you?”

2 thoughts on “Chapter 9: Preview and Demonstration”