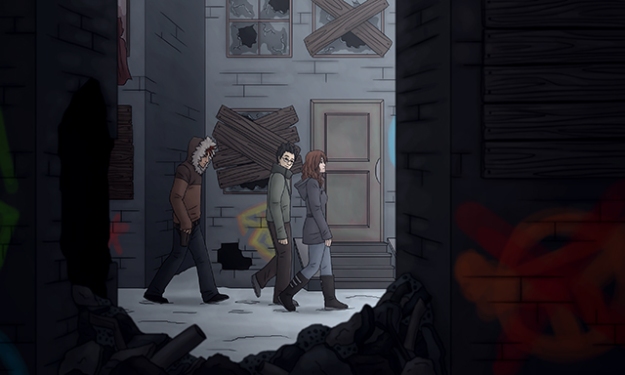 Snow crunched underfoot as Fiearius strode down the dark path, lit only by pools of moonlight. Night had fallen in Vescent, which made the temperature drop to freezing, but it was the safest time to travel through the city without being spotted by rebels or looters. Leta and Ren were ahead, leading the way since they knew the area well — after all, Fall’s End was where they’d spent their life together.

The library — Ren’s hiding place for his research journal — was on the eastern side of Fall’s End, well out of the Carthian secured zones. Fiearius couldn’t help but feel tense and uneasy as they trekked through rebel territory in the dark. Personally, he had no issue with the rebels — he would have been irked by Carthis’ takeover of his planet as well. Hell, he’d probably be out in the trenches with them …

But he still didn’t want to meet any of them. He was a moving target after the anti-Carthian media had gifted him the nickname ‘Gates’ unleashed attack dog.’ And for that reason, his hand rested on his holstered pistol the entire walk.

Leta, on the other hand, seemed confident in their safety. As she weaved through the crumbled buildings, her knife and gun lay untouched at her hip. And she had every right to feel safe here, Fiearius thought to himself. Even with her Carthian allies, she had made a name for herself as a Vescentian loyalist with her clinic. These were her people. In their eyes, she shined.

And in Ren’s too, apparently.

“Bet you’ve treated half the people in this city by now,” Ren said suddenly, grim but impressed, as they passed a tremendous brick building that looked abandoned — a deserted hospital.

“Well, someone needs to,” said Leta darkly, exhaling a white cloud in the frigid air. “Carthis has done some good things of their own, but the people are still suffering. Someone’s gotta look out for them and help the recovery process. Might as well be me.”

“Keep it up and there’ll be a statue like this of you soon,” Ren grinned, nodding toward a rather hideous crumbled sculpture in the center of the hospital’s square.

The further they went, the worse Vescent seemed. Even Fiearius rarely ventured out this far so the sights of the boarded up buildings and lingering piles of rubble from a battle long over took him by surprise as much as they did Ren.

“Still haven’t gotten this stuff cleaned up, huh?” he muttered, almost to himself, but Leta answered.

“The people are doing the best they can, but without help from Carthis, there’s only so much they can do. And Carthis won’t help, can’t help, when they’re too busy building up their own defenses at the city center. So this whole area’s just been abandoned. Forsaken.”

Fiearius grunted in disapproval and kept on. But then Ren slowed to a stop, his eyes locked on one of the buildings they passed. It looked to have been ravaged by fire years ago. Someone had spray-painted a massive Society librera upon the door. Someone else had crossed it out to add a Carthian emblem and presumably a third person had written ‘FUCK YOU’ on top of that.

Leta realized she’d lost half her entourage and returned to Ren’s side, a distinct look of worry on her face. She gingerly touched Ren’s arm and whispered, “Hey…” in that ever so careful way. No doubt, Leta was weary of Ren having another ARC episode. She’d been handling Ren delicately ever since he’d boarded the Dionysian. But it wasn’t ARC that made Ren stop to admire the building.

“Can you believe we used to live here?” he said in disbelief.

“You lived here,” Leta corrected, and Fiearius heard the amusement in her voice. “I was too good for this place. I thought it was a brilliant idea to live in the most expensive part of the city for no reason.”

“You stooped to visit me once or twice,” Ren reminded her playfully, and his tone made Fiearius avert his eyes and start off again, not quite in the mood to witness their reminiscing.

“C’mon,” he heard Leta say at last, leading him away from their old building. “The library’s just around the corner.”

The library was a tremendous brick building that had clearly once stood tall and prestigious.  But inside, everything was in shambles. Fiearius held up a flashlight, but he realized at once he didn’t need it. The library he’d expected to be pitch black had a streak of moonlight coming in from a hole the size of the ship in the ceiling. Which made sense, he realized, when he saw the remains of a Carthian fighter buried in the tile.

“Gods, how long do you think that’s been here?” breathed Leta.

The ship had been torn apart, salvaged for scraps, and covered in snow. Much like the rest of the library. Shelves were knocked over, books strewn across the ground. Glass glittered along the floor. The whole place had been ransacked and looted.

“Sure hope this book of yours is still here,” said Fiearius as he crept down the foyer steps. His eyes scanned the cavernous room, his ears strained to hear any signs of life, but nothing met his senses. Still, he couldn’t shake the feeling that they weren’t out of danger, even in this deserted old relic of Vescent past. His hand gripped his pistol tighter.

“It will be,” Ren said, speaking softly as they crept through the space, stepping over both rubble and literature. “It’s stored by the circulation desk.”

Fiearius was skeptical, but he followed Ren and Leta as they crossed through the library.

As they walked, Leta mused, “I always wondered. How did you find out about this stuff anyway? How did you get started?”

Ren looked over at her. “It started with you, actually.” When Leta just tilted her head at him, confused, he explained, “When you told me you were working with the Society, I got curious. I’d heard things, whispers and rumors about them. I wanted to look into it. Make sure you were safe.” He lifted one shoulder in a shrug. “It was just basic stuff at first, the history, formation, all that. But I kept digging deeper and soon enough, I knew things that I really shouldn’t have known.”

Fiearius frowned at him. “Those things you shouldn’t know though…That shit’s not just available in a–” He gestured to the library around him. “Where did you find it?”

4 thoughts on “Chapter 7: The Library”