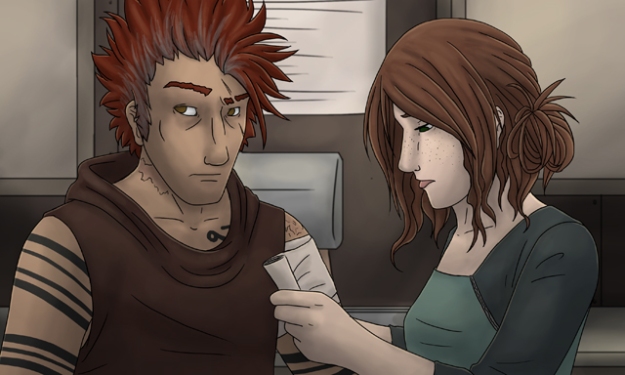 For a moment, Fiearius thought he’d gone back in time, the scene was so terribly familiar: he was slouched on a dirty exam bench in the Dionysian’s infirmary, scowling, while Leta wrapped a bandage around his shoulder. Like so many times before, he was at the mercy of this woman’s expertise as she held stinging medicinal gauze against the burns on his skin. It was just like the old days — with a few startling differences in company.

On his other side stood Javier, a tablet in his hands as he rattled messages Fiearius had received while he’d been ashore. Apparently, there were a lot of them.

“Captain Lorren has invited you to his husband’s charity event,” Javier was saying.

“Quin sent a report on the–”

“Save for later–ow.” He shot Leta a glare as she squeezed some gel onto his arm.

On the other side of the infirmary, Dez was pacing the floor impatiently. Unfortunately, Ren’s little outburst had had the exact effect Fiearius had predicted.

“You can’t go after the Councillors without me, Fiearius,” Dez said, for perhaps the tenth time since he’d followed them back to the Dionysian.

“I can,” said Fiearius simply.

“The Paravian News Network wants a statement on–”

“Not successfully,” Dez went on. “You’re a half-baked assassin at best, you really think you can pull this off alone?”

Fiearius’ eyes narrowed at him, but he didn’t justify the slight with an answer.

“Lieutenant Garrow wants to know when you’ll be on the CORS next,” said Javier.

Fiearius was sure he’d heard that incorrectly. He stared, one brow raised. Even Leta stopped what she was doing to glance at him incredulously. Awkward silence filled the room, and then Javier said, “Admiral Gates’ assistant would like to have a call for your request about Leta’s apartment.”

“Ignore,” Fiearius said at once, but he cracked a grin when Leta’s jaw dropped. “I’m kidding, I’m kidding, schedule it.”

“Fiearius, you know I’ve been hunting for clues about the Councillors for years. This plan was mine. I need to see it through just as much as you do,” Dez said matter-of-factly.

“It wasn’t just your plan,” Fiearius insisted. “We’ve all known it would have to come to this eventually. But Dez, you know I can’t work with you in public.”

Fiearius shook his head. “It will be once it happens. You can’t be involved, I’m serious. I need to do this without you.”

“Because you’re loyal to Carthis,” Dez put in, snarling with bitterness.

Fiearius groaned. “I’m loyal to myself and to my own. But the fact remains that Carthis is taking the brunt of this war on their shoulders and I need them on my side. And you,” he pointed to Dez, “are going to get in the way of that.”

Dez fixed him with a sharp stare, his arms crossed over his chest, but he said nothing more. Fiearius was sure this argument wasn’t over. Dez was hardly the kind of man who backed down when he wanted something. But suddenly he felt a sharp pain shoot through his arm, heard himself yell “Shit!”, and he forgot about Desophyles entirely.

“What the hell was that?” he demanded of Leta who was holding a spent needle and gazing back at him innocently under her eyelashes.

“Nothing,” she said. “Just something my team was working on back on Vescent. Something to keep you alive. Don’t worry about it.”

Before he could ask what Leta was looking so pleased about, the door swung open and Ren stepped inside, his hand still on the door knob as he scanned the room, his expression blank.

After the conversation they’d had right before the man’s home burned to the ground, Fiearius wouldn’t have been all that surprised if Ren had just disappeared. Sure, he’d said that he would help, but he definitely didn’t sound very happy about it so when he’d lagged behind to help his neighbors and relay Fiearius’ offer to join one of the many refugee camps popping up around the Span, Fiearius half-expected him to bolt.

But there he was, in the doorway, blinking back at their expectant faces.

“They’re gonna be okay. One of them has a ship large enough to carry them to the Orcion camp. They’re heading out in a few hours.”

Fiearius thought he felt Leta tense beside him, but perhaps it was his imagination. “And you–you’re not going with them? You’re coming with us?” she asked, half-smirking, half-wincing at Ren. “Are you okay with that?”

“I should have known it would come to this at some point,” said Ren, letting his hand fall from the door as he entered the room. “That research could never be buried forever. I guess now’s the time to dig it up.”

“Hang on,” said Fiearius suddenly, his eyes narrowing in confusion. “I thought you said you had no idea where it was?” He glanced at Leta who frowned at him curiously. “That your journals were long gone.”

“Of course I said that,” Ren answered simply. “I wanted you to leave.”

Fiearius felt a sharp spike of irritation and a strong urge to cross the room and sucker punch the guy in the face.

“I hid them before I was arrested,” Ren went on. “It’s possible that the Society dug them up, but…I doubt it. If you honestly think it will end this war, I’ll lead you to them.” His tone suddenly got very serious. “But that’s all I’m doing. After that, I want no part in any of this.”

“It would be safer and easier if you help,” she said, softening. “We’ll never be able to understand what’s written there without you. I kept a few of your old journals, and the codes are so complex — even Cyrus couldn’t decipher them.”