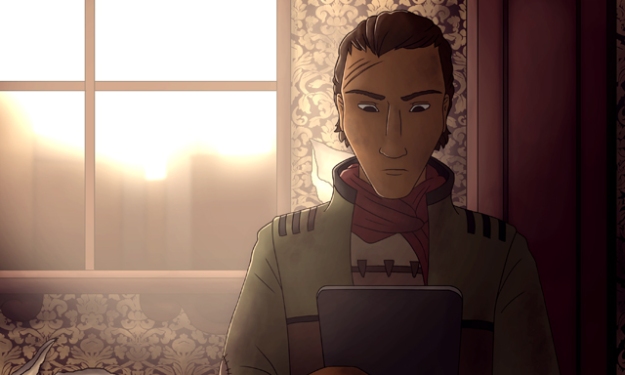 Callahan was completely unlikeable, Finn thought to himself with some amusement as he sat across from the man’s desk. Completely unlikeable, and for so many reasons: like how he spoke minimally in their business conversation and mostly kept his eyes on the tablet in his hands. Or how he scoffed and sneered when he saw homeless people asking for money in the streets. Or how he always spoke in a lofty, oily voice. Of course, Finn found that his most unlikeable trait was his disgusting treatment of Corra. He’d decided that Corra was a subservient ally and there was no changing his mind about it.

But for better or worse, Corra was not present in this meeting. She’d informed him brightly that morning that she had better places to be and considering Callahan’s attitude toward her, Finn shrugged his compliance. He’d do this one alone.

“So,” he said briskly, breaking the minute of awkward silence. He hoped to bring Callahan’s attention off the screen in his hands. “We’re delivering another ship for you, then.”

“That’s right.” Callahan did not look up. “A very important ship. To keep safely in your cargo bay. I’m willing to pay you and your crew substantially upon completion.”

“No problem, we’ve done hundreds of ship transfers,” said Finn breezily, which was not exactly true. Callahan set aside the tablet, lifted his gaze, and Finn was startled to see the sudden cruelty resting in his eyes.

“This isn’t like your other ship transfers, Riley. Which brings me to the conditions of this particular job.” His mouth stiffened with seriousness. “My client is very…particular. He will not tolerate any person tampering with the product.”

“Yeah, of course.” Finn’s voice was neutral. “We wouldn’t touch his ship.”

“No, I don’t think you understand.” Callahan nearly smirked. “You will not make any other stops first. This ship will be placed in your cargo bay for transport. You’ll go directly to Cataline City. Meanwhile, the ship will not be touched by anyone’s hands but his own.”

“Touched, opened, examined,” Callahan went on coldly. “It must absolutely arrive on time, in pristine condition, is that understood? At no point during transport are you or any of your employees to step foot on or near the cargo. There will be no delays.”

“Sure,” said Finn, nodding. But he couldn’t resist adding, “Don’t suppose you can give me any clues as to what’s so precious about this ship.”

Predictably, Callahan just smirked and did not address the question. Instead, he folded his hands and mused conversationally, “I noticed you came alone today. Where oh where did that ally girl of yours get off to?”

“She’s not my ally,” Finn said dully for the thousandth time. “She’s a captain, like me. And she’s — off on some other ship business.”

Corra plucked the clear glass goblet off the shelf and turned it over in her hand. The crystal facets shone, catching the light coming in through the shop window and casting rainbows on her fingertips. It was pretty, very pretty. But it wasn’t right. Carefully, she placed it back on the shelf and moved on.

There were a lot of pretty things in this shop, really, but as she scanned the rows of trinkets and curiosities, nothing struck her as perfect. Not for Leta. Corra had thought that a gift of some sort might have a shot at lifting Leta’s spirits. But she should have known better to think she might find that gift at a Genisian consignment shop.

Giving up, she waved a brief thank you to the woman behind the counter and headed out to the street. It was actually a nice day — as far as Archetian days went, anyway. The sun was shining, the layer of grime in the air was thinner than usual and the temperature was just under its usual level of blazing heat. Corra had never been fond of Genisi (who was?), but for once she was glad to be out and about in the city, especially if that meant she wasn’t at the meeting with Callahan.

Sure, she felt bad for putting it all on Finn, but Callahan liked Finn and Callahan hated Corra so what good would her being there do anyway? It was probably better for business if she just let Finn play full-on captain when the man was around. After all, he believed that was the case no matter what. So while he managed that, she could run the errands for the Beacon (and of course a few for herself) and they were doubly productive. What was wrong with that?

And she’d apologize to Finn later. For now, she continued alone along the empty quiet street, scanning the windows of each store she passed.

She was just about to give up and turn back towards the docks when something caught her eye in the reflection of a window. A shadow moving across the street — moving closer. Perhaps she wasn’t as alone as she thought. Surely just another deal-hunter like herself?

But then the second shape appeared.

Nervous now, Corra glanced over her shoulder just as a third figure slipped out of an alleyway and onto the street behind her.

Well whoever they were, they were following the wrong woman.

Turning around to face them, Corra’s hand went to the gun on her hip, but they must have noticed: suddenly, shouting filled the air, a rush of pounding feet, and before she could react, two sets of strong arms yanked her backwards and forced the pistol out of her grasp. It clattered to the ground and she let out a yell of her own, only to have another hand slammed over her mouth.

“Woah there, keep it cool,” urged someone behind her as Corra struggled to break free. But no matter how much she writhed and swung and squirmed, the two men holding her were double her size. “Gotta lotta fight, this one.”

Corra growled, opened her mouth and sank her teeth into the nearest finger. The man it belonged to screamed and drew his hand back at once. Another one laughed, but Corra only had a second to notice it before the same hand she’d bitten slapped her across the face.

“Fuckin’ kroppie,” the man growled, finally moving in front of her so she could get a look at him. He was dressed in clothing far too nice for a local and he didn’t have Finn’s Archentian drawl in his voice.

“Who do you think this one belongs to?” asked the man holding her as Corra tried to swing her fist into his stomach and missed.

“Who cares?” said the man with the bitten hand coldly. “Either someone’s lookin’ for her or we just drop her off on Kadolyne with the rest, decent price either way.”

Kadolyne? Corra knew that name far too well. Kadolyne, where she’d grown up. Kadolyne, where she’d boarded the Dionysian for the first time. Kadolyne, the largest ally trading center of the Span. Corra’s heart stopped beating. Her will to fight slowed. She sunk into her captors’ grasp. Oh God. No. No no no, she’d had this nightmare a thousand times: she was going to be sold back into the ally trade.

“Let’s just get her and the other one to the ship,” said the man. “And we can get the hell out of–”

But before he could finish his thought, another voice rang out in the street.

“Boss!” it shouted and all three surrounding Corra turned back to watch as a skinny shirtless man suddenly sprinted out of an alleyway, his hands tied behind his back and a gag in his mouth. On his tail was another man, who yelled, “Boss, he got out!”

Corra’s captor groaned. “Oh for fuck’s sake,” he growled, shaking his head, “Just had to hold him ‘til we got back.” He made a move to go assist in the chase, but Corra was no longer paying attention because her guards weren’t either. They were distracted, watching the bound man hurtle down the street and this, she realized, was her chance.