Everything about Vescent — from the gray clouds in the sky, to the slick cobblestone streets, to the stone buildings — was entirely strange and foreign. Not a piece of it felt familiar. As best as Addy could manage, she kept her head down, only briefly consulting the map she’d drawn on the inside of her palm, as she navigated her way through the dark streets. She hoped she didn’t look as out of place as she felt. Otherwise, this mission would be over before it even began.

Addy had nodded. Then she said,  “Corra’s gonna kill you once she finds out.”

“Probably,” said Fiearius. “But I’ll handle her. You just look out for yourself. Dov’ha re’ija niéle.”

The fighter ship was a bigger vessel than Addy anticipated, but still flew beautifully; she could see why Finn loved these little ships. In the journey toward Vescent, she occupied her mind by tinkering with the ship’s security protocol to make sure there’d be no hiccups when she arrived.

After the landing, Addy’s nerves keyed up. The air was cool and she squinted up at the swirling gray Vescent sky — nothing like Satieri, nothing at all — and then joined the check point line. Her hands were shaking, so she slid them into her jacket pockets and tried to keep her expression neutral. But her heart was ramming inside her ribcage.

She realized that she had not, until this moment, really believed there was any possibility her fake CID wouldn’t work.

When it was her turn, the agent gazed hard at her face, read the console screen, then waved her through. She had to concentrate on not heaving a heavy sigh of relief.

But she’d made it through the entry gates into the city. She’d made it inside. Now, it was a matter of finding where Cyrus and Leta were hiding out.

Society agents stood at every corner, dressed in all black. Some of them were armed with heavy assault rifles; others stood there with their arms crossed; Addy saw one agent yelling in a woman’s face, and she quickly veered in a different direction.

When she’d found the apartment, when at last Delia had let her inside, Addy took her first real breath. Cyrus was the only familiar sight she’d seen in days.

He looked thunderstruck. Then he crossed through the living room room, grasped her face in his hands and pressed his lips to hers, warmly and fully, for nearly five seconds. She could hear Leta letting out a gasp of shock, but in those five seconds, Addy let herself revel in the warmth and shock that he was alive. That she’d found him. Normally she would have been embarrassed by the tears that formed in her eyes, but when Cyrus released her, she just brushed them away carelessly.

“What are you doing here?!” Cyrus demanded. “How’d you get here?”

“It’s a long story.” She let out a shaky gasp — half laughing, half crying. “Basically, thanks to some of my dad’s genius, I can land safely on some Society planets. Oh, and hi, Leta,” she added, glancing over Cyrus’ shoulder to see her on the edge of the room.

She looked stricken with uncertainty. “Is — Fiearius isn’t here too, is he?”

“Thank the gods,” said Cyrus, groaning as he took Addy’s wrists and led her over to the couch. He sat down, holding her wrist tighter. “I mean, not that it’s good that you’re here. Shit, what are you doing here? Do you realize where you are? How dangerous it is? Gods, what if someone caught you or something happened? Did Fiearius send you? Why the hell did he–”

“Can you save that for later?” said Addy, unable to bite back a smile. “Less about how I got here. More about how we’ll get out of here. I have a ship. One of the Beacon’s fighters. We can leave on it.”

Cyrus winced, biting down on his thumbnail. “Well that’s one big problem solved, but what use is a ship if we can’t get to it? There are agents everywhere. And the dock’s checkpoint…”

“What if we go during a rush period?” said Leta at once. Addy could see the hope in her face, and her heart twisted: Addy wished she had some way of reassuring Fiearius that she was alive and alright. “The guards are more lax during crowded hours,” she went on quickly. “They can’t check everyone. If we get there in the morning when the dock’s busy? We can blend into the crowd and slip right through.”

Cyrus nodded slowly. “Right. That could work.” His eyes trailed across the room to Delia who hadn’t spoken a word since Addy had arrived. She stood up against the wall in the corner looking uncomfortable in her own home. Her arms were crossed over her chest, the corners of her mouth were turned down.

Delia looked up at him, her eyes dazed as though she only just remembered he was there at all. “What if it doesn’t work?” she asked, her voice barely audible.

Cyrus glanced at Leta who looked at Addy who had no idea what they would do if it didn’t work. Gods, it just had to work. They had to get to that ship no matter what.

And Delia confirmed it. “You can stay one more night,” she said, her tone cold. “But after that, don’t come back here. I can’t–” She swallowed hard. “I don’t want to turn you in. I don’t. But you can’t be here anymore.”

The three of them shared a look before Cyrus met Delia’s stare. He could do nothing but nod.

The entry gates to the docks were crowded with people, but eerily silent. Tension was thick in the air. No one in the sea of people spoke above a hushed whisper as they edged forward toward entrance. “Move!” one of the agents barked, making an elderly woman jump; she hurried through the gates and toward the row of ships.

Leta was donning the headscarf again, her eyes darting around as the line began to move. She kept close to Cyrus and Addy. Together, they made a point of staying in the center of the crowd, hopefully preventing agents from seeing them too closely. Leta’s heart turned over in her chest: was it possible they would be leaving? Was it possible — dare she believe it — that she’d see Fiearius by tomorrow? Her chest ached with hope.

The line inched forward again. They were ten people away from the entrance, then five, then three, and Leta could feel her breathing shorten with worry. At her side, Cyrus was wrought with tension, and for a fleeting moment she saw Cyrus and Addy holding hands amongst the crowd.

Just when they reached the gate, a shout erupted into the air. Leta jumped and spun around just in time to see two agents pulling at a woman, dragging her away from the scene. She was screaming.

It was clear the agents were trying to silence her, but unrest rippled through the crowd: murmurs erupted as people began to shift uneasily. A woman near Leta’s ear suddenly grabbed her arm, making her jump.

“The last time someone fought them like this, they shut down the docks for a month,” the woman breathed, her eyes wide and horrified. “No one could leave at all.”

Fear bolted through her. She shared one look of terror with Cyrus and Addy, and they had a silent conversation. Shut down for a month? They could have been trapped here for —

But Leta never got the chance to even think through this horrible possibility. The woman being dragged off was still screaming. Then five more agents pushed through the gates, pushing people out of their way — barking orders —

“Dock access is a privilege, not a right!” one of the men yelled. The crowd was stirring around him. “All citizens must — ”‘

Abruptly, the man stopped, and Leta experienced a cold wave of shock when she realized he was staring straight at her. His face darkened and he grunted, to her astonishment, “All Society personnel need to pass through Checkpoint B. What’re you doing over here? You should know better.”

Leta felt her mouth open, but no words came out. Society personnel? How did he — why did he —

At her side, Cyrus gave her the slightest nudge on her arm. Her tattooed arm. Glancing down briefly, she realized that when the strange woman had grabbed her, she’d pulled on her sleeve — exposing her librera for all the city to see.

At once, the citizens standing around Leta grumbled and backed away. I’m not one of them, Leta thought, feeling powerless and hysterical as the Society agent approached and took her arm.

“C’mon, you, over this way,” he said, steering her away from Cyrus and Addy who could only look on in horror as she was drawn into the crowd. 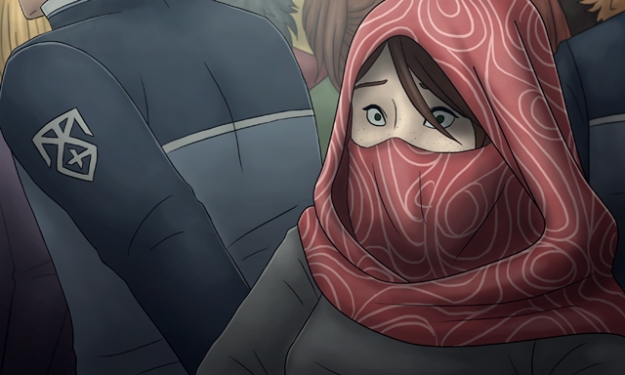