“So he asked her out, but the timing was just kind of sketchy so it didn’t happen,” Corra explained to Alyx. She was seated in the dining hall of the Beacon, which was growing all the more crowded with crew members from both her own ship and the Dionysian. A happy chatter filled the room, punctuated by the sounds of clinking dinnerware.

Corra, however, wasn’t eating. She was amusing herself by observing Cyrus, who was talking with Addy and Nikkolai across the room. It could not have been more obvious, with the way he was throwing her eager looks, that he wanted to be alone with her.

Alyx sat at Corra’s side, similarly entertained. “He could’ve asked her out earlier but I got in the way,” she sighed. “Now I feel terrible.”

“Oh, don’t, he probably wouldn’t have had the guts to ask her again anyhow,” Corra assured her, leaning back in her chair.

Across the dining hall, Nikkolai, apparently distracted by something Javier was doing, flitted away from the pair, leaving Cyrus and Addy alone. Corra was amazed.

“Oh come on, Cy-Cy. Just ask her if she wants to go somewhere else,” she whispered.

“Ask her out for dessert or drinks,” Alyx added.

“I was thinking ask her upstairs,” Corra laughed. And indeed, Cyrus was saying something, but before either one of them made any motion to change location, suddenly Addy was talking to Maya and again, all hope was lost. Slumping backwards, Corra shook her head. “I swear, he will never learn.”

“Pity, they could be cute together,” Alyx mused sadly before pushing herself up from the table and picking up her plate. “Anyway. I’ll be taking my dinner to go if that’s alright by you.”

“Oh no, I could watch this all night. I just didn’t know my mother was invited.” She nodded towards the table where Quin sat in rather heated discussion with Fiearius, Dez and Leta. “Not really in the mood for a reunion, cap’n.”

“Understood,” said Corra. “Do what ya need, I’ll update you if anything interesting happens.”

Alyx chuckled and waved goodbye as she left Corra sitting all alone at the long table. Her attention shifted toward the unfolding argument on the other side of the room.

Everyone seemed to be having a good time, except this table. Quin, Fiearius, Leta and Dez were regarding each other angrily, clearly discussing the events of Blackwater.

“I don’t know what you’re so damn worried about, Soliveré,” Quin was saying, slouched confidently in her seat. “We won, didn’t we? And it was easy. You said it yourself, the people manning these things are just people. We did it twice, now, we can do it again.”

“They’re not going to let us do it again,” said Leta, her arms crossed and her expression steely. “Not after this one. There’s no way.”

“We’re going to have to,” said Dez. “We need to act again and act quickly if we want to make this worthwhile. To rally the people to–”

“Rally the people?” Fiearius interrupted, sounding incredulous. “You can’t be fucking serious.” His expression was dark; he looked ready to strike at any moment. But Corra noticed under the table that his hand was holding Leta’s knee.

“I am,” said Dez calmly. “If we want the people of Exymeron and the Society territories to side with us, we need to–”

“This is insane,” Fiearius growled. “You are insane.”

“Well what do you wanna do, eh?” asked Quin, pounding a fist on the table. “Go back to petty thievery?”

“Petty thievery? The only reason you’re even siding with this nonsense is because you want to steal more ships,” Fiearius pointed out.

“And the only reason you’re not is ‘cause you’re a coward,” challenged Quin. “Isn’t this what you wanted? Justice for your Council or whoever?”

Fiearius shook his head. “It’s not cowardice, it’s sense. Sure I’d love to see ‘justice,’ but what I want is different from what’s possible. I would much rather focus on keeping my ship flying and the people on it alive. And after that wonderful stunt back at Blackwater, even that’s gonna be difficult. But actually attacking them head on? With just the Dionysian and a single serving of Society fighters?” He shook his head. “It’s insane, it’s — “

“Real fun party, huh?” said Finn’s voice suddenly in her ear. Corra was glad for the distraction: Finn lowered to the seat beside her, shaking his head at the arguing table.

“If I’d known they’d be at this all night, I wouldn’t have invited them after all,” Corra sighed.

Finn did not look his usual light-hearted, humorous self. He paused and then said, “You heard what happened, right?” in a quiet voice.

And, Corra thought, Fiearius was right. What they’d done to the Society base was a tremendous, bold, terrifying move. No doubt the Society would be tripling their efforts to take it down. Take her friends down. Suddenly she was hit by a stroke of guilt.

“D’ya think we need to help them?”

Finn swung his eyes back to her. “Eh?”

“I mean, if this really does blow up in their faces,” she went on. “If the Society really comes after them. Should we help? Should the Beacon help them?”

She grew suddenly quiet. “And what if–what if they decide to fight back?” She nodded towards them. “Like they’re saying. If they really want to get justice or…something like that?”

She looked up at him, surprised. “Isn’t it? They’re our friends.”

“Enemy of my friend isn’t necessarily my enemy,” Finn grunted. “I mean, what’s the Society done to you?”

“Well…nothing to me exactly,” she admitted. “But what they’ve done to Leta and Cyrus and Fiearius…”

“But you don’t think we should help.”

“I think we have our own jobs to do.” He winced, but went on steadily, “Look, aligning against the Society will put limits on us. It’ll mean there are certain places we can’t go. Certain jobs we can’t take. And for that, we’d probably lose Callahan. And without Callahan, without steady income, we’d lose some of our people too.”

“Plus we’ll be putting the crew in danger we could otherwise avoid. We’ve only just managed to get Beacon off the Society’s radar entirely. You really want to risk jumping back on it? Knowing what that might mean?”

“No,” Corra said firmly. “The last thing I want is to be hunted.”

“‘Sides, didn’t you say earlier you wanted to help allies? How are you gonna do that with the Society on your tail? Even if we don’t do it now, look at the long term. If they want to take on a lofty fight against injustice, more power to ‘em. But that’s their goal. We need to be thinking about ours.”

Corra looked down at her hand as her fingers tapped the table nervously. “You’re right,” she muttered. “We have a responsibility to this ship and this crew. We need to do what’s best for us, not the Dionysian.” She was sure she didn’t sound entirely convinced because she wasn’t entirely convinced, no matter how right the decision was. And it was clear to her why.

“But if it really comes to that. If they attack the Society and we refuse to help?” she said quietly, her eyes trailing over to Fiearius and Leta. “They’re not gonna be happy.”

Finn wrinkled his forehead, looking troubled. “No,” he agreed, “No, they won’t.” 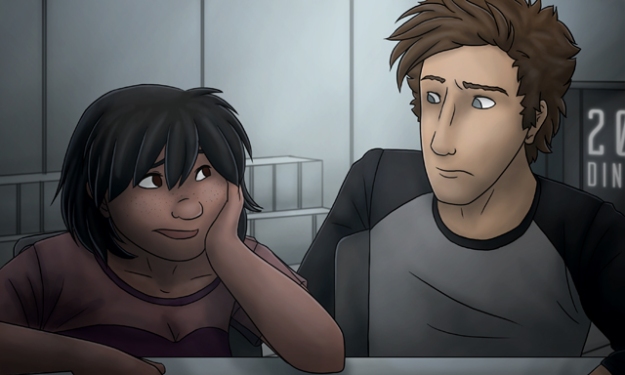