” … And that’s how I ended up in the military,” Finn finished, leaning one elbow on the bar. With his other hand he tilted a glass of dark beer to his mouth and regarded the young woman standing across from him. She had long dark hair flowing down her back and a kind smile, though in this moment she looked at him rather skeptically over the rim of her glass.

“Mm, you don’t seem like the military type,” she said. Finn grinned.

“Is that why you’re here? Who did you say you were looking for again?”

“Ah — right.” Finn’s attention was slipping further and further away from the job. Something about being back home was making it hard to focus on anything but the beer in his hand and the pretty woman across from him; he could feel himself falling back into his old familiar habits.

But they had work to do. He took another drink but centered his attention. “Lookin’ for a woman named Elena. She works here, supposedly, though I can’t find her. Lives near the eastern docks. You heard of her?”

“Sort of sounds familiar.” The woman’s expression shifted. “You lookin’ to cause her trouble?”

“No, no. The opposite, actually. Trying to help her out.” Finn hoped that was true. He actually had no idea why Quin wanted this woman so badly.

“Hey!” came a sudden voice in his ear. Finn straightened up at once and realized it was the bartender barking at him, pointing a gnarled finger at his chest. “You Riley? Finn Riley?”

He arched a lone eyebrow. “Afraid so.”

“Good,” the bartender grunted. “Someone in the back is lookin’ for ya.”

Finn lowered his glass, feeling curious. Was it Corra, scolding him for his lack of work ethic? Elena herself, catching wind of strangers looking for her? Or maybe an old friend. He had a handful of them in this town. After assuring the woman he’d be right back, no problem, stay right there, would ya, darlin’?, Finn weaved his way to the back room of the bar.

It was much quieter here. The tables were empty. For a moment, Finn thought he’d walked into the wrong place, but when he turned back for the door, he found it had been slammed shut.

A man clutching an assault rifle blocked the exit.

His hand jumped to the pistol tucked into the small of his back, but he too slow: the man struck the end of the rifle across Finn’s face with such blinding force that his vision went black.

“It wasn’t your place. I was fine. I was taking care of it,” Alyx snapped, standing in the center of the room as Quin paced circles around her.

“Taking care of it? Sure as hell didn’t look like you were taking care of it,” Quin barked back at her to which Alyx rolled her eyes for the tenth time in this conversation. Corra stood quietly and patiently off to the side of Quin’s office, still reeling from this revelation. At first, she couldn’t believe it. How could Quin and Alyx be related? It was just so farfetched. And yet as soon as she’d gotten them in the same room together, all the doubt had been wiped from her mind.

“It was only a few months. Then they were going to let me go.”

Quin stopped her pacing and eyed the girl in alarm. “Tell me you’re not naive enough to believe that.”

Alyx groaned in frustration. “Fine, but what right did you have to pull others into it? If you wanted to help so badly, why wasn’t it you in that bar getting me out? Hell, why wasn’t it Aeneas? Or any of your little pawns?”

“Right, god forbid someone find out I’m your daughter. Every bad guy in the Span will descend upon me and at once, of course,” Alyx mocked and Quin’s eyes went wide, glancing quickly at Corra.

“Relax, I already told her,” Alyx muttered which only earned her another glare. “And on that note, why the hell get Corra involved? Now she’s gonna have the Ministry against her. I can’t think of anyone who deserves that less.”

“I don’t really mind,” Corra put in quietly, but Quin was already talking over her.

Alyx’s mouth dropped open and she started shaking her head. “Oh no no. No. You’re not just sending me off again. No.”

“Well ya damn well can’t stay here,” Quin said. “The Ministry will come looking and I can’t protect you.” She frowned bitterly. “Nor do you want me to apparently.” She looked to Corra. “You got room on your ship for one more don’tcha?”

“Uh yeah,” Corra agreed because she didn’t really see a choice otherwise. It had taken all of ten seconds with these two to realize it was best to just sit and listen.

“Good. Then you’ll go on the Beacon,” Quin decided.

“Don’t I have any say in this?” Alyx demanded. “I don’t want to be on another ship. I just want to be in one place, settle down, get a job, meet some people and not have trouble coming at me from all directions.”

Quin’s frown cracked into a look of pity. “Ah honey, trouble’s gonna follow you no matter where you go.” Alyx groaned in defeat and fell back onto a couch, slumping over and putting her head in her hands. Carefully, Quin went over to her and put a comforting hand on her shoulder. “Which is exactly why I want you on a ship. At least there you’ve got a shot to outrun it.”

Alyx was quiet for a moment before shrugging her mother’s hand off of her indignantly. “I want to choose which ship then,” she bit.

But just when things started to seem like they were getting better, Quin shook her head. “No,” she said abruptly.

“Why not?” Alyx demanded, standing up again.

“Because the last ship you chose to board sold you off to a gang.”

“Right, and because what happened on the Dionysian, the last ship you chose for me to board, was so much better,” Alyx snapped and the room suddenly silenced.

An image of Ludo filled Corra’s mind. She felt a lump form in her throat that she couldn’t swallow. The urge to bolt from the room was overpowering.

Unfortunately, she also felt glued to the floor where she stood. She sort of wished Finn were here for this, if only for solidarity. Then she wouldn’t have been the only person to bear witness to this mess.

Finally, Quin broke the silence. She turned from her daughter and moved away to the window. “Fine. Do as ya please. I ain’t gonna force you.”

Alyx watched her for a long moment, her expression softening. But it wasn’t to Quin that she spoke. “I’m sorry, Corra,” she said, turning to her. “I’m sure the Beacon’s a great ship, I just — I don’t want to go back to that life. I don’t want the running or the violence or the danger. I don’t want to ever pick up a gun again. I just want peace.” She frowned sadly. “Know what I mean?”

The implication wasn’t exactly a flattering one, but Corra didn’t feel offended. She knew exactly what Alyx meant. And regardless of what her mother may have wanted, Corra knew what she had to do.

“Totally,” she said softly. “That’s part of why I left the Dionysian too.” She smiled sweetly and then added with a laugh, “Except the gun part. But on the Beacon, we don’t really do much shootin’. Least not yet anyways. Got no one chasin’ us so no one to run from. Hardly any violence. Some of our crew haven’t shot a gun in their lives and probably never will. There’s always danger I suppose. But least there’s not danger of our ship fallin’ out of the sky.”

Corra tried not to meet Quin’s eye even though she was watching her intently. The last thing she wanted was for either of them to think she was doing this for any reason other than helping a friend in need. “I won’t be mad if you don’t wanna come with us,” she went on. “But if you are lookin’ for a ship, the Beacon’s a good one.” She smiled. “I think you’d like it.”

Again the room dipped into quiet as Alyx watched Corra with interest, the wheels of thought clearly turning in her head. But before she could ever give her answer, a chime dinged from Corra’s pocket. Puzzled, she pulled out her COMM to find a new message waiting for her. A new message from Addy.

What could her engineer possibly need? Corra glanced over her words, ready to discard the message. But then her insides froze with fear.

It must have shown on her face because Alyx asked, “What’s wrong? You okay?”

But Corra couldn’t speak. This couldn’t be happening. Her mouth dropped open. It was only when Quin snapped, “Out with it, girl,” that she stammered aloud what Addy had written.

“Finn was taken,” said Corra, her voice shaking so badly she could barely talk. “Mica. Mica’s the guy we met with our last job — Finn punched him and now — now they took him. They sent a message to the Beacon, saying they’ve — they’re going to — “

Panicked, Corra shoved the COMM back into her pocket and started back for the door, though she had no idea where her feet were taking her.

She’d nearly made it out before Alyx had swept through the room and suddenly shoved a rifle into Corra’s hands. “Then let’s go get him.”

Corra stared at her, confused. “But you just said you never wanted to–”

“One last time,” Alyx said. “It was for me that you two were out there at all. I’m at least partially responsible. So. One last time before you take me away into retirement.” She smiled bitterly. “Let’s go get your friend back.” 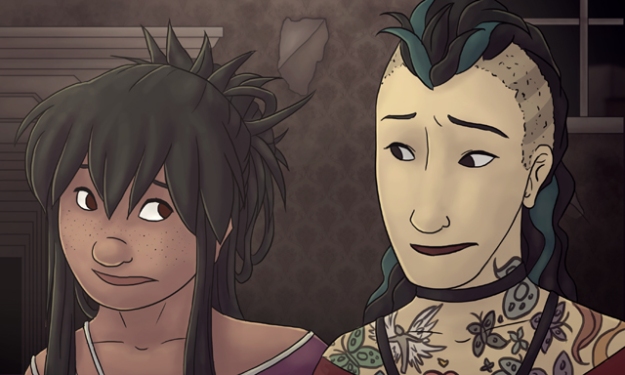