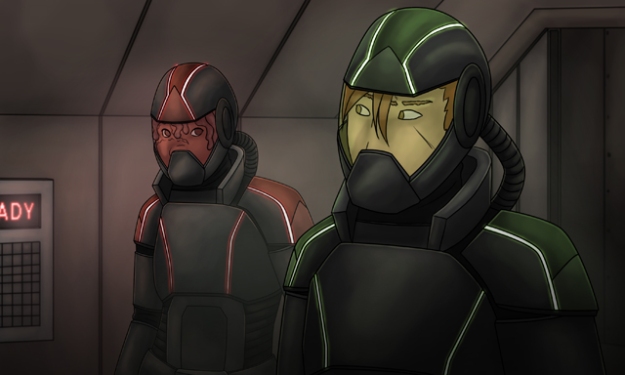 This was not, exactly, how Fiearius expected to spend his afternoon. He thought he’d finish breakfast, check in with some of the crew and return to lounging around with a pretty girl for company before evening.

Instead, he was preparing for all the dangers that came with boarding an unknown vessel in the dead of space. Against all of his better judgement, the Dionysian was undergoing the docking sequence: through the airlock’s window, he glimpsed the extender reaching out, bridging the gap between the two ships and locking them together. The Dionysian’s walls groaned around him and the pressure gauge began to rise.

Grumbling Ridellian curses under his breath, Fiearius started to pull on the pieces of the airtight suit, readying himself for the possibility of hostile oxygen, hostile occupants or both. As he loaded his pistol with a thud of metal, he tried to think of any possible way he could talk Leta out of this mission. But then he snorted to himself, shaking his head. When there was a moral imperative on the line — when there was someone that she could help — Leta was about as flexible as a brick wall. And in this situation, at least, he could sympathize. If there really were innocent dying people on this ship, the last thing he needed was their blood on his hands.

He just wished he could be more sure that there were innocent dying people at all.

“Mighty fancy suits ya got here, cap’n,” came a sudden voice behind his shoulder.

It was Eve, pulling her helmet on and eyeing him curiously. Fiearius hadn’t spoken much with his newest gun-for-hire since she’d joined the ship back on Archeti, but that was one of the reasons Fiearius liked her: she didn’t ask much of him.

“Aren’t they?” he said with a lopsided smile. “Stole ‘em off a civilian cruiser a year back. Top of the line, or so they say.”

“Impressive, real impressive.” She banged her knuckles on her helmet. “So what’s all this about anyway? Why we headed over there?”

“Distress call,” Fiearius sighed, glancing through the window into the dark passageway between the two ships. “Supposedly a medical emergency. Their COMM seems to be down though, so we’re heading over there to check it out.”

“Just a medical emergency?” She nodded at the pistol at Fiearius’ hip. “So what’s with all the heat?”

Eve grinned back, hauling her rifle over her shoulder.

Meanwhile, the airlock doors slid open as Leta stepped inside, medical bag hanging diagonally across her chest, gun holstered at the top of her leg. She fiddled a moment with the airmasks in her hands and then, in the few moments of privacy they were afforded, she muttered to Fiearius, “You think I’m being crazy, don’t you?”

“No, of course I don’t think that,” Fiearius assured her warmly. “I know that.”

Leta remained unphased. “You know, Cyrus said the consoles haven’t been touched for at least a week. Could mean that whoever is over there is unconscious.”

“Or they’re dead,” Fiearius suggested with a shrug.

Her eyes shifted toward the window, then back to his face, full of earnest. “How can you really think I’m entirely wrong about this?”

“If I really thought you were wrong, I wouldn’t be doing standing here in a spacesuit.”

Leta raised her eyebrows at the guns lining his hips. “But you don’t think I’m right, either.”

With that, he grinned, plucked her helmet out of her hands, and lowered it over her head. As he locked it into place, he said, “Just erring on the side of caution,” and tilted his forehead against hers, their glass helmets clinking.

At last, Leta mustered a begrudging grin. “Coming from you, that’s rich,” she said, just as the airlock doors glided open a second time behind her.

Sour and silent, Dez was the last member of their boarding party, and he could not have looked less interested in the job.

“You know, you don’t have to come,” said Fiearius dully, though he half hoped he would. On one hand, Dez staying on the Dionysian would prevent Fiearius from having to deal with that silent judging stare on the back of his head the whole venture. On the other, gods forbid he was right and Leta’s moral optimism had failed her, they could certainly use his help — and weaponry — for the alternative.

“Accompanying your team is the least I can do,” was Dez’s stoic response as he pulled on his own helmet. “Is it not my duty to lend a hand in delaying the consequences of your poor decisions?”

Uncomfortable silence fell, save for Leta’s disgusted scoff, as Fiearius met his stare straight-on, expressionless. Well what had he expected, really? An apology? A graceful agreement to disagree? When had Dez not been full of grim self-importance?

Shaking his head, Fiearius turned back towards the airlock door and pushed the button on the side of his helmet. “Cy, you hear me? What’ve you got?”

“Found the prints,” came his voice with a slight crackle of air. On the upper deck of the Dionysian, Cyrus was glued to a console in the bridge, available via COMM. “The ship is called ‘The Mariah.’ I can lead you through it. She’s got power, I got a response back when I pinged the operations system, but it’s only running minimum processes. Life support’s up and running, but I can’t guarantee it’s breathable. Temperature reading is fine though. You should be good for boarding.”

Dez hit the control panel, making the doors glide open at their feet to allow them into the Mariah. A short metallic hallway opened before them, which Fiearius carefully eased into, his gun in hand, as his crew followed on his heels.

And then, came darkness.

The cargo bay of the unexplored ship was plunged with blackness, save for one single red emergency light overhead, blinking slowly. From what he could see, trunks and boxes were scattered throughout the floor, but it was as silent as a cemetery.

With the short crackle of a speaker, Leta touched the piece near her ear. “Cy, can you get some lights on in here?” she said, and a few moments later, a few dull lights flickered on, half-illuminating the room well enough that they could see their way along the floor.