The bridge fell quiet as its occupants absorbed what they’d heard. Well it certainly hadn’t quelled any of Fiearius’ misgivings about this place. Now, he wanted to leave more than ever.

“Well,” Dez said at last. “Looks like that plan didn’t work out very well for him.” He gestured towards the body against the wall.

“The real question,” Cyrus cut in, “is who that was on the other end of the call. Did they ever even make it here? Why did the captain sound so nervous when supposedly they were getting help?”

The hairs on the back of Fiearius’ neck tingled. “Does that really matter?” he asked, feeling shaken now. “There’s nobody here, nobody to help, nothing left for us to do, let’s just leave this floating tomb in peace.”

“After we take a look around first?” suggested Eve, looking hopeful. “Just to see what they’ve got in their armory?”

“I want to know what happened to the crew,” said Leta quietly, determination in her face. “What this infection is and how it wiped out twenty people.” She crouched down beside the fallen captain and realized, with a jolt, “Wait…this a gunshot wound. To his side, here. Look.”  With deft fingertips, she peeled back part of the man’s jacket, making Fiearius wince. Then he met her eyes in confusion.

But neither of them ever reached a conclusion. The walls of the cabin suddenly shuddered, like a grand beast trying to shake them out of the room. Even the floor tilted sideways. Eve yelped, Leta gasped, and Fiearius grabbed the doorway to keep from staggering over.

But Cyrus’ voice was filled with panic. “Oh no. No no no. Fiear, get out of there.”

“What?” said Fiearius, yelling over the sound of the shaking walls. “What’s going on?”

“Get off the ship,” he breathed. “Get back here now. There’s no time, just run!”

Fiearius exchanged one wild look of confusion with everyone in the cabin before they all bolted toward the door. In a panicked group, they jostled into the hallway and pounded down the stairs. Fiearius managed to breathe, “We’re running, Cyrus, care to tell me why?” into his helmet.

Amidst the sound of hurried typing, Cyrus’ voice was shaking with panic. “Someone is locking down the ship. Trying to trap you inside.”

“I don’t know! It’s a self-triggered protocol.” A trap, Fiearius realized with horror. “Hurry, get back here — I can only hold off the lock-down for a minute — “

Suddenly, at his side, Leta staggered to a halt. “Wait,” she breathed, eyes round. She turned on her heel. “I just have to see — I just have to get back to the ward. It’ll take a just a second — “

Horrified, Fiearius’ first instinct was to snatch her arm, but she twisted herself free and darted back into the ship, shouting an explanation over her shoulder.

“We need a sample from those cadavers, Fiear! We need to see what the disease is so we don’t catch it from them!”

Fiearius watched in a frozen kind of horror as Leta disappeared back into the ship to the medical ward. He rushed forward after her but then he saw it: in the corner of his eye, the airlock doors were sliding closed.

With a lightning bolt of panic, Fiearius threw himself at the airlock, jamming himself in between the doors and pushing at the edges with all his strength. Straining with effort, he yelled, “Whatever you’re doing, Cy, it’s not working!”

Eve dropped her weapon and joined him, heaving her weight to keep the heavy metal doors open. Her help afforded him a moment: frantically, he glanced around for the others, but Leta was nowhere in the cargo bay. And neither was Dez.

“Shit, Fiear, the Dionysian’s getting leeched,” said Cyrus in his ear. “You need to get out of there!”

Fiearius gritted out, “No — not yet — we don’t have everyone!”

Finally, thank the gods, Dez rounded the furthest corner with Leta behind him. Fiearius had one moment to register the sight (Dez had gone back for Leta?) when suddenly, the ship gave a tremendous tremble of metal and the floor toppled beneath him. His footing was lost: he stumbled into the passageway between the ships and then, just as he looked up, the airlock doors slid shut smoothly before his eyes.

With Leta and Dez on the other side.

A rush of air blasted him, ruffling his hair, as the Dionysian disconnected from the ship and the chamber depressurized. Shaky with panic, Fiearius pushed himself to his feet, clutching onto the walls desperately as gravity started to weaken. He could do nothing but watch as Leta’s helmet pressed up against the window, her fist pounding at the door, her mouth shouting soundlessly as the ships slowly began to drift apart. 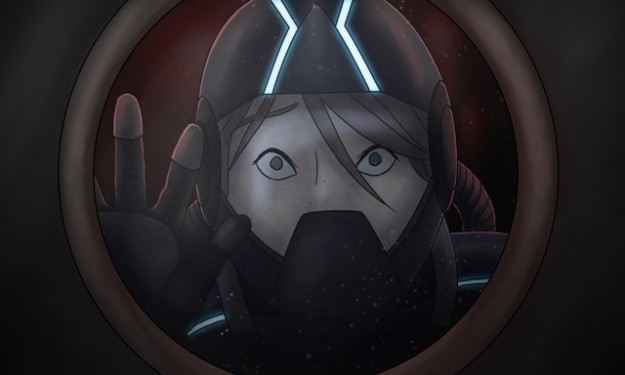