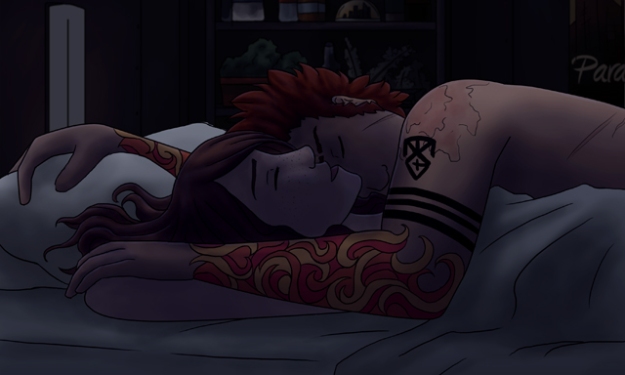 It was nearly four in the morning ship-time when Leta, for a reason she didn’t know, snapped her eyes open.

For a bleary moment of confusion she thought Fiearius roused her awake, but then she lifted her head and her eyes adjusted to the darkness: he was still fast asleep against her shoulder, snoring into her neck, a tangle of heavy limbs. He always slept like a lion: sprawled out carelessly, pinning her to the bed with his weight.

She lifted herself to her elbows and realized what had woken her: the console screen across the room was flashing dully. An incoming call. She was the last person to use that console, her account was still signed in. Which meant someone was trying to reach her. Corra, probably.

She gently elbowed Fiearius to the side, to no avail. Then she elbowed him roughly over to his back. He snored on obliviously as she slid her bare feet to the floor, grabbed for her blouse and pants from the nightstand, and darted toward the hatch.

Downstairs, her bedroom was cold, quiet and rather abandoned — these days, she rarely slept here.

Dropping into the desk chair, Leta swiped a hand across the screen. One new message from Corra, ten unanswered notifications from Fiearius requesting that she join him in some online gaming match. Quickly she read the coordinates of the incoming call. It was from Carthis. Which meant …

“Ren?” she realized with a start.

The speaker cackled and then, to her immense shock, the room filled with the voice of her ex-fiance.

“Are you alright?” Leta’s heart lodged in her throat. “What’s the matter?”

“No, no, nothing’s the matter. I’m fine. I’m — really good, actually,” he said, half-laughing in a self-deprecating sort of way.

Leta could not believe her ears: his voice was relaxed. Assuring. This was the Ren she knew years ago.

“You sound  … well,” she said in quiet amazement, and she could practically see his sheepish smile in reply.

“I’m getting there. The first few weeks of the program were up and down, but there’s a reason Carthis has a reputation for taking care of POWs. I really turned a corner this week.”

She could feel him smiling even if she couldn’t see him. Leta shook her head, dazed.

“I didn’t call just to thank you, though,” he admitted. “There’s actually something I wanted to talk to you about.”

“I wish it was better news.” He sighed. “The Carthians have been keeping their ears to the ground. They picked up some whispers they thought that I should know about. That you should know about.” He took in a deep, sharp breath. “There are bounty hunters after you, Leta, and you’re in danger. A group of them were all given the same assignment: find us. The reward is astronomical.”

Leta said nothing, letting this news sink through her slowly.

“I know you have every right not to believe me, Leta,” he went on seriously. “After I messed up so badly when I was on your ship. I know that. But this time, it’s not my imagination. I’m thinking clearly now. And the Carthians are worried.”

“I believe you, Ren,” she said in earnest. “I do. Trust me, it’s not surprising that bounty hunters are after the Dionysian. It’s sort of expected around here.” A wry smile came to her face, but Ren’s tone lowered seriously.

“No, you don’t understand. They’re not after the Dionysian, Leta, they’re after you. And me. Specifically. I can show you this hit. It’s new. There’s a recent picture of you attached to it. As of three days ago, someone wants us alive and brought back to Vescent and bounty hunters are jumping all over it. I’m safe while I’m on Carthis, but you … on the Dionysian … ”

Leta felt unsettled, but not quite scared. Or even startled. The Dionysian was sailing safely off-grid, undetected, and they hadn’t even been flagged in weeks.

“It’s hard for me to believe that, but I trust your judgement. Unfortunately, there’s more. I think I know who sent the bounty hunters in the first place. I think it’s a man named Arleth Morgan.”

She waited, but recognition never reached her. She shook her head. “I’ve never heard that na — ”

“No. You wouldn’t have. Because, supposedly, he’s dead.”

Leta blinked her eyes, suddenly wondering if she was over-indulging Ren in this conversation. “This is sounding like one of your conspiracies. The last time you shared one of these, you ended up in prison.”

“Please just listen,” he interrupted quietly. “Not only is Morgan part of the Society, I think he is the Society. I think he’s the Councilor of Vescent.”

Leta’s head ached. Ren had presented some unbelievable theories before, but this one seemed far out of left field even for him. “I thought no one knew the names of the Councilors. They’re anonymous. I thought — ”

But Leta broke off. If Ren’s theories were truly crazed, the Society wouldn’t have captured and imprisoned him in the first place. He knew something. And perhaps this was it: the identity of someone in the Society’s inner circle. Suddenly, she wished Fiearius could have heard this conversation. He would have been stunned.

“Well, of course the Councilor of Vescent wants us back,” Leta mused dryly. “He probably wants us both killed. We’ve caused a bit of trouble.”

“Especially you,” added Ren, but his tone was affectionate. He breathed a tired sigh. “Listen. I could be wrong and I hope I am. But if this Morgan guy is a Councilor — well. He’s brutal. The things he’s done– just trust me when I say he’s dangerous.And now he’s got every resource available to look for you.”

Leta rested her forehead in her hand. “I know you’re worried, Ren. But it’s alright. The Society has been hunting my ship for months and months and we’ve evaded them.”

“I know,” said Ren quietly. “I just wanted you to be prepared. There’s a new threat here, and I think I’ve put a face to it, and … ” He trailed off, and Leta imagined he was gnawing his lip like he always used to when he was deep in thought. “Just keep everything I said in mind, alright?”

“I will. Let me know if you hear anything more.”

“I wish I could’ve talked to you under better circumstances. It’s — really good to hear your voice,” he said quietly.

Leta hesitated a moment. “You too, Ren.”

She was on the verge of saying goodnight, her hand hovering over the ‘disconnect’ but then her mind shifted toward Fiearius, upstairs, asleep.

“Actually,” said Leta suddenly, feeling brave, “there’s one more thing. This might be uncomfortable for you, but I just feel like I should tell you anyway … I’m, well. I’m seeing someone now.”

Several beats of heavy silence descended between them. Leta thought they had lost connection. At last Ren said, “Well hey, good for you,” in a sincere, heartened voice.

Abruptly Leta snorted a laugh: of course Ren, in all of his goodness and patience, would bid her well. In spite of it all. “You don’t have to say that,” she laughed. “Really. You can feel bitter and angry at me. But it felt like I should be honest with you.”

“I’ve never been able to muster much anger at you,” Ren reminded gently. “You did save my life, after all.”

And you were the one who ended things, added Leta silently in amusement.