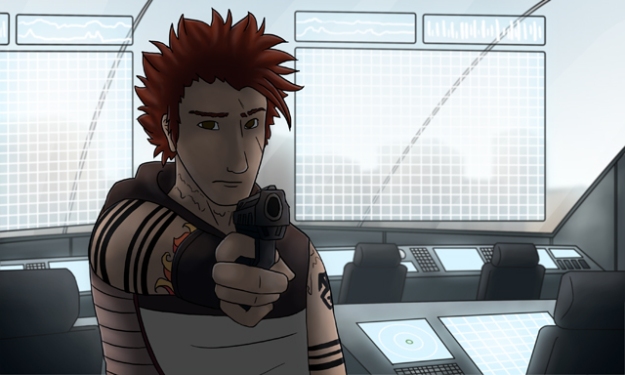 Time froze. For seconds, neither of them moved: Fiearius held his gun at Ophelia’s chest and she held hers straight at his head, her expression cold as ice. Even now, he couldn’t help but notice how impossibly steady her arm was: she hardly breathed, she did not blink. Whatever she had been before, now, she truly was the ideal Society machine.

Fiearius glimpsed the motion in her hand. Her finger curved to squeeze the gun’s trigger, but then, a sound erupted across the room:  pounding on the door. It was Dez and Eve, trying to make their way in, and the noise stole Ophelia’s attention for a half-second.

The inch of time was just enough.

Dropping his arm, Fiearius ducked sideways from her line of fire and kicked at her knees, sending her staggering to the side. When she went to right herself, Fiearius jabbed his forearm against hers, smacking her gun from her hand, making it fly across the room.

He spun around to contain her, but in a flash she lashed out: with the full force of her body, she rammed against his ribs and injured shoulder, making him growl in pain, and worst of all: his own gun skidded right out of his hand.

Fiearius staggered backwards, feeling hot blood waterfall down his arm. With each of them weaponless, they regarded one another for one intense, precarious second, before they both turned and lunged together in the direction of her gun several feet away.

He was faster, but she was smarter: his hand nearly closed around the gun’s grip before she launched on top of him, kneeing him hard in the gut, knocking the wind out of his lungs. He made to throw her off but her forearm smashed against his Adam’s apple, pressing hard into his throat, blocking air from his chest.

Groaning, he wrestled her to the side and that was when he heard it: a croak of breath from across the room; someone saying his name. His eyes shot sideways and he realized with shock he was not, unbelievably, without an ally.

The captain — Leisa, Leisa Fardan, that was her name — was flat on her stomach, lying in her own pool of blood. She half-crawled forward on her elbows, straining breathlessly, before she suddenly did something he never would have expected: with all of her strength, she shoved his gun three feet closer to his hand.

With a sudden yell of pain and determination, Fiearius threw Ophelia off his chest and grasped blindly for the gun, spinning around wildly on his feet. Just like before, she was now dodging out of sight.

He couldn’t catch her himself. But maybe with the the help of his two gunhands …

Keeping his eyes forward, Fiearius backed up on his heels toward the main door. In one motion he turned and hit the controls, making the doors slide open, and then he quickly wheeled around once more.

Dez and Eve pounded into the room at once as Fiearius stepped carefully around the perimeter, awaiting an attack. Waiting to see her flash just past his eyes. But all that greeted him were Leisa’s shallow breaths and then —

The vents across the room suddenly rattled. Fiearius spun around and directed his gun there but then, a full minute passed without movement. Or sound.

She had fled. Now that he had the upper-hand — the gun, two allies — she would have rather escaped than face him.

Perhaps she hadn’t changed much since he knew her after all.

She was gone. He couldn’t believe it. Dez and Eve stared at him in awe (“Cap’n?” said Eve quietly, but he was too out of breath to acknowledge her).

Lowering his gun, he turned and marched back toward Leisa on the floor. A sliver of hope lifted his chest that maybe it wasn’t too late for her …

But this time, the woman lay quiet. Unmoving. Fiearius gazed at her for several seconds and couldn’t help but notice that her hair was knotted in a braid, just like Leta always wore hers. Her widened eyes gazed emptily across the room.

Silence filled the cabin. Tense, uncomfortable silence until suddenly Fiearius spun around, let out a yell of pain and threw his fist straight at the wall.

She got away with it. She escaped. Just as quickly as she had appeared, Ophelia was gone.

For several seconds, no one moved. No one spoke. Then, his speaker in his ear crackled to life.

“Soliveré?” said Quin’s familiar drawl. “Where the hell you at? Everything alright up there?”

Fiearius dug his hand into his hair. “Yeah, it’s fine. It’s fine.” He turned over the gun in his hand — it was shining with his blood, and Leisa’s. “We’ll — we’ll be right out.”

Eve was crouching near Leisa’s body, frowning with interest. She let out a low whistle. “Sure don’t pity this lady. This your doin’, captain?”

“No,” said Fiearius sharply. He couldn’t bring himself to look at fallen body any longer so he turned toward the door.

Dez followed him. “Varisian will probably be long gone before we can look for her,” he said, to which Fiearius grunted.

“S’alright,” Fiearius muttered and as he headed toward the door, patting her on the shoulder as he passed. “You did good. Now c’mon. Quin’ll be wanting her new ship and I’ll be wanting to get the hell off this rock.”