Which was why Fiearius had made the calculated decision, a half hour ago, to down a half-pill of Flush. Just a half of a pill was all, just to get him moving. Now, that jumpy energy was just starting to return to his legs, his mind was just beginning to snap awake ….

Twenty minutes later, Fiearius was stepping into Quin’s office with his usual swagger, Dez on his heels. Her office was a large room cluttered with antiqued sofas and desks, and it was empty, but only for a moment.

“There you are,” came Quin’s bemused voice as she strode in through the opposite door and closed it behind her, clicking it shut. She was an older woman, with creases lining her eyes and her grayed hair pulled back to the nape of her neck. A few scars marred her features, and, typical of Archetians, the city’s smog had stained her clothes and skin, but she held herself like an Ellegian noble nonetheless. For someone with a stature so small, her presence overflowed the room. Even Dez straightened his shoulders.

“Soliveré,” she greeted, spreading her arms, pulling him into an embrace and swiftly kissing either of his cheeks. “Not dead then, I see.”

“Did you hear otherwise?” Fiearius couldn’t help but ask as he drew away.

“Oh I read the Satieran newsfeeds, my dear. Dead as a damn doornail,” she cooed, rather wistfully, though a smirk spread across her face as she lifted her hand to his cheek. “Knew it couldn’t be true. Although — “ She suddenly frowned, her dark eyes shifting over his face. “There’s something different about you.” The older woman held him by the shoulders, searching his face. “You don’t have the usual gloom and doom in your eyes. Somethin’ got your spirits up, hun?”

“Can’t imagine what,” Fiearius replied, an image of innocence that Quin hardly bought.

“Yeah, I bet.” She nudged him in the ribs with her elbow. “You’ll have to introduce me later, hm?”

She always had managed to read him like an open book. But for now, Quin spun around and stalked back into the center of the room. “Well, just glad to see you in the land of the living. The day you’re actually dead is the day the Carthians give up on the border planets. Come in!” she ordered, “Have a seat.”

As always with Quin, Fiearius did exactly as he was told and lowered into a high-backed chair. Although he didn’t particularly want to stay long, he kept obediently quiet when she suddenly called, “Aeneas! Where are you? We have company, bring drinks.”

Aeneas was Quin’s — Assistant? Right hand man? Bodyguard? Fiearius had known him for four years and still wasn’t sure. The younger man slid into the room silently, poured drinks out of a glinting decanter, and passed them to each person in the room. Quin herself lounged back in her usual ripped up armchair, exuding importance from every pore.

“You know, for someone from such an affluent planet, you sure do have terrible manners,” she remarked, a sudden bite in her voice that made him wince. “Not calling for months, dropping in unannounced … failing to introduce to me your friend here.”

Dez had taken the seat beside him, silent and stoic as always.

Quin’s expression darkened, though Dez didn’t seem to notice. “A pleasure to meet you ma’am,” he announced on cue, reaching forward to shake her hand.

Quin just eyed his hand with distaste. “Ma’am?” she repeated. “How old you think I am that I wanna be called ‘ma’am’?” Dez looked as close to perplexed as his face allowed.

Eager to smooth it over, Fiearius added, “He’s my…business associate,” but the explanation had the opposite effect.

“Don’t think me to be dumb, Soliveré. I know damn well who Desophyles Cordova is and what he done. All I want to know is what he’s doing here.”

“Helping, ma–” Dez began, but managed to cut himself off as Quin lifted her brows at him in a rather threatening manner.

“He’s joined the Dionysian’s crew,” Fiearius cut in. “He’s one of mine now. If you trust me,” he told her seriously, “you can trust him.”

Quin hardly looked convinced. Her cutting glare continued to invisibly rip the man before her to shreds, but somehow, miraculously, her posture slackened. “Fine,” she snapped. “You’ve been good to me, Soliveré. I’ll give you this. But if lettin’ this Sochy scumbag walk in and outta here alive comes back to bite my ass in any way, there’ll be hell to pay for the both of ya.” She took another long sip from her glance and through the wince that followed, she asked, “So what is it ya need, huh? Work? Got plenty of goods need movin’, plenty of lives need stoppin’, pick your poison.”

“Actually,” said Fiearius, leaning forward to rest his forearms on his knees. “I’m here with a proposition.”

Her interest was clearly piqued. “That so?”

“You know the Society supply ships?”

“No, sweetie,” she muttered sarcastically. “Never heard of ‘em.”

Ignoring her, he went on, “I have information on the ships, their crew, their specs, their shipments, I–”

But before he could even get to the meat of the plan, she cut him off. “Hang on now, sweetie, haven’t you gone after Society supply drops before? Last time, you were here even? This sounds mighty familiar.”

Fiearius resisted the urge to groan, though he had to note Cyrus would be even more embarrassed to realize how many people still remembered that. “Okay that. That was my brother and my doctor trying to trade marked weaponry for med supplies with Grice. And every single word in that sentence is just…wrong. Bad news. All around. This is different. This is me and you and our people using a royal flush of confidential intel to take three Society ships for all they’re worth.”

All the while as he spoke, Quin watched with her solemn, thoughtful stare, the edge of her glass perched against her lips as though she was debating whether or not to take a drink. She remained that way for what felt like an hour even after he was finished. She was so still and silent that Fiearius wasn’t even sure if she’d ever answer at all.

But at last, she lowered the glass from her lips and asked, “What is this ‘confidential intel’?”

Fiearius grinned. “Did you know the ships they send on these runs are the retired models of their mainline frigates?”

“And did you know that those models were retired due to their faulty security systems?” Quin’s brows visibly lifted on her forehead. Fiearius went on. “How about that ninety percent of the crews manning those ships are fourth division Transport agents? That the Archetian supply run is most commonly recommended as an easy way to meet the single required induction flight to qualify those who are after a cushy third division desk job? Or that, due to the captains’ trade deals with local Genisian gangs, the run is seen as so low-risk that the ships only carry enough weaponry to arm 1% of its crew?”

At this point, Quin looked genuinely impressed. But as usual, she wasn’t. “And where did you come across this intel?” Her glare turned back towards Dez. “Excuse me if I feel inclined to question some of your sources.”

“You’ve read the news,” Fiearius said, drawing her attention back to him. “You know what I am. This is the kind of access the gig comes with.”

“Ah yes. The perks of being Verdant?” she said the word as though it was coated in something rotten. “And I’m offended, by the way, you never mentioned that to me before.” Fiearius shrugged helplessly, but a guilt trip didn’t appear to be on her mind. “So you want to assault the Society ships when they bring the supplies. And you want my help?”

“They’re sitting ducks, but they still outnumber my handful of gunhands. Not to mention whatever other gangs might not be so happy we’re cutting off their supply line.”

Quin scoffed with amusement. “Other gangs? Childsplay. So — let’s say I lend you my manpower. What’s in it for me?”

“Three Society ships and whatever the hell’s on ‘em,” Fiearius said briskly. Though what he saw as a gesture of good will, she clearly saw as trouble, and her eyes narrowed suspiciously.

“I’ll take a small cut to keep my ship afloat, but the rest is yours.”

Well, she certainly wouldn’t let that one go. He wrinkled his forehead with thought. “Tell ya what. Send me the newsfeed the day Satieri reports the theft.” A smirk grew on his face. “I can’t wait to read their take on it.”

Quin observed him carefully, but realization slowly dawned on her. Disproval lined her face, but she was laughing as she said, “You just ain’t right in the head, are ya Soliveré?” She let out a sigh and leaned back in her chair. “But as much as I shouldn’t take advantage of the ill…I can’t say no to three new Satieran ships, can I?” A gentle smile curved her lips. “I think we may just be able to work somethin’ out.” 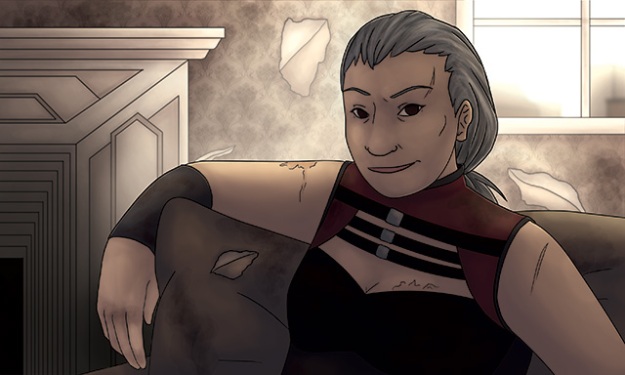