“Oh, you’ve never heard of Ordenon?” said Yseltin, tugging at fabric near her knees. “It’s a city on the other side of Tarin. A very wealthy, lavish city. Colonized by those who apparently thought the high streets of Tarin Proper weren’t high enough for them. It’s quite a sight to behold, I hear. Great mansions and sweeping hills, no expense spared. The Ordenians are thought to be the wealthiest in the Span.”

“But,” he went on, “as wealthy as they are, they’re certainly no craftsmen. They fly into our own humble city so often to trade that they set up their own district on the east side. Nowhere near as extravagant as Ordenon itself, but dov’ha gia’me, it’s something! Very closed-off though. Need all the proper documentation to get through the gates.”

“From what I hear, there’s a group of them in town tonight,” he went on as though imparting some scandalous gossip. “They’re known to throw quite the elegant soiree. Now I don’t claim to ever know what that ti’eh waré is thinking, but if I were you, I’d be excited.”

“Too true,” came Fiearius’ voice. He paused in the doorway, hands in the pockets of his slacks — which lacked the grease and blood stains of his normal wear. A dinner jacket sat neatly around his shoulders, and he looked clean and put-together in a way Leta had never seen before. She was about to comment on his appearance, but then she noticed the odd, appreciative look brimming in his eyes. His gaze roamed over her bare freckled shoulders, down her dress, a faint smirk curving the side of his mouth.

Yseltin came to her aid. He spun around with his hands on his hips. “You’re not supposed to be back here. I’m not ready for you yet. And where’d you find those clothes?!” he gasped.

“Rack on the other wall,” Fiearius said, jabbing his thumb over his shoulder, still without breaking his line of sight.

“Did you just…get changed in the middle of my store?”

“Yeah.” He wound into the room and held out his hand for Leta. “So. Ready to crash a fancy party?”

Yseltin had been right: it was an elegant soiree. Ordenians in long richly-colored gowns and stiff jackets circled through the hall, chatting and laughing and toasting champagne. Sparkling chandeliers hung from the ceiling and a string quartet played near the dance floor. It had been a long, long time since Leta attended an event like this: it felt like stepping into her youth.

“Not really my kinda party,” Fiearius admitted, smirking at her as they descended the staircase into the hall.

“No kidding. Hey, you never told me,” Leta realized with a start, looking around at all the guests. “Who are we pretending to be, exactly? These people will sniff us out.”

“Oh, right,” said Fiearius quickly. “I researched this. You are Adinia Roledai, the rebellious young daughter of Venian Roledai who passed away a few months ago. She ran off to Vescent actually when she was thirteen. No one’s seen her since. No one would recognize her. And I. I am your unworthy Vescentian husband with no noble blood and a measly two million a year income.” He smiled innocently. “Fitting, right?”

As they wound toward the bar, she side-stepped closer and slipped her arm around his. Fiearius shot her a look of interest.

“Right,” he said, curving his arm around hers. His grin was almost blinding. “The part.”

They weaved their way into the hall. As they walked through the crowd, Fiearius kept exaggeratedly greeting people as if he’d known them his whole life.

“ — and how’s the wife? The kids?” Fiearius was saying to a puzzled older man, before stealing his glass of champagne, downing it one gulp and then handing it back to him. Leta, snorting to herself, quickly steered him toward the bar. It was a much safer bet than leaving him loose around these people.

As their drinks were slid smoothly across the bar into the hands, Fiearius’ attention span was already thinning. “We should dance,” he said, then downed half his drink in one shot. “Dance with me.”

The orchestra was just beginning a new tune; couples were melting onto the dance floor, hand-in-hand. A tug in Leta’s chest told her she would’ve liked to join, but she turned away from the dance floor. “You shouldn’t even be on your feet right now at all, Fiear. Your legs are barely healed.”

And besides — this night was such an odd turn of events; she’d gone too long without answers. “Fiearius,” she sighed in exasperation. “Why are we even here? You haven’t told me a damn thing, just that you need my help to get a gift. We got the gift. So what are we doing now?”

“The painting wasn’t the gift I was talking about,” Fiearius said, reaching for his martini once more. “That was just step one. Now I need your help with another gift. Which is around here somewhere … “ He glanced over his shoulder around the hall.

“So we’re stealing yet again. Who is this gift for?” she asked impatiently.

“Then what is it? Just tell me that at least. Tell me something. You’re killing me. Because this is just about the absolute weirdest date — or non-date,” she amended hastily, careful to avoid Fiearius’ eye, “that I’ve ever been on.”

“Date?” Fiearius laughed like he’d never heard anything so outlandish. “Who said anything about this being a date?”

Leta cocked her head to the side, full of innocence. “Oh? So it’s not a date then.”

Amusement sparkled in his eyes. “No,” he said simply. “I mean — “ he added mockingly, “I certainly don’t expect that.”

He was using her own words against her. Naturally.

“Very funny,” Leta responded dully. She traced her finger around her glass, then looked up at him. “This is just getting ridiculous you know. You and I.”

He simply rose his glass in agreement. “Yep.”

“Do you want to talk about it then? About what happened between us.” About what is still happening between us, Leta added silently.

Fiearius looked momentarily surprised. “I have no idea what you’re talking about,” he claimed innocently, for about ten seconds — before he lowered his glass to the bar and looked at her seriously. “Yeah. Actually. I wouldn’t be opposed to revisiting the terms of our arrangement. But not here, alright? Not around these … stiffs … “

He drew his brow together and cast an uncertain look around the hall, while tugging uncomfortably at his collar. “You’re used to this kinda thing, aren’t you? What’s there to do at these classy parties?”

“Well,” Leta sighed, “we probably should be interfacing with our wealthy contemporaries … “ She turned back to the bar. “But I’m going to keep drinking.” As she lifted her glass to her lips, she couldn’t help but notice the bartender and a few people nearby were throwing them lingering, questioning looks.

“Our disguises might be failing,” she muttered, averting her eyes. “We’re drawing some stares … “

“Pretty sure that’s just you,” Fiearius teased, toying absently with a ruffle of fabric around her waist and grinning at her. With his other hand he polished off the rest of the drink and looked around: the hall was more crowded now, the music was louder and the dance floor was full.

“Alright,” said Fiearius briskly, thudding his drink down to the bar. He watched in amusement as a well-dressed older man stumbled over himself on the way to the dance floor. “Showtime. These people are officially too drunk to figure out what we’re up to. Let’s go.” 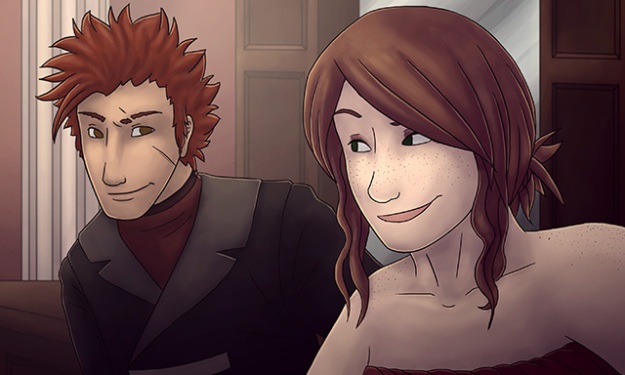