“One hundred kilometers away,” Finn shouted over his shoulder at Cyrus. “Ninety. It’s comin’ in fast, Cy.”

“I know! Just keep giving me its location!” Cyrus snapped as he dug through a mess of wires in the darkness — all the overhead lights had shut off, plunging them into shadow. The life support still hummed quietly, but the alarms had all gone silent. The room had filled with nothing but nervous anticipation and Cyrus’ own heart racing as fast as it ever had. And occasionally, the sound of Finn’s voice.

“Eighty,” he read off, jerking his knee up and down in anxiety. “It’s the Imperium. Heading up our starboard side.”

“Yeah, because we’re not moving!” Finn pointed out. “Sixty,” he read as Cyrus fumbled with a connector. “Cy, it’s closing in. What the hell are ya doing? We’re sitting ducks.”

“Just one more minute,” Cyrus grunted, ripping one of the wires out of the panel and tossing it over his shoulder.

Finn watched the trajectory of the wire in mild horror. “Are ya sure we don’t need that?”

“Thirty,” Finn answered obediently.  “One shot at this range? We’re gone. I don’t know what you’re planning, but — ”

“Just tell me where it is.”

Finn didn’t respond. The whole bridge went quiet. So Cyrus asked again, “Where is it?!”

Frustrated and panicked as he was, Cyrus spared one glance toward his pilot and then froze in horror. Just outside the bay window was the shimmering black mass of a ship, a silver librera emblazoned across its bow. It seemed to be staring straight at them, entirely still, just waiting for them to make their move.

“Not to rush ya or anything but…” Finn prompted quietly, but Cyrus was stunned in place. What the hell was it doing? If the ship was hailing them, they’d never know with the COMM line disconnected. But he got the strangest feeling it had no interest in contacting them. He got the sensation that it was sizing them up. Just watching to see what they’d do.

And then suddenly it wasn’t. Two weapons ports opened up on either side and started to beam with light as they loaded up.

Cyrus didn’t bother to respond. He practically fell back into the electrical panel and went straight for the piloting controls, jamming the wire back into its place. It wasn’t quite ready, but–

“Go! Now!” he shouted as the screens beneath Finn’s fingers switched back on.

“Fucking finally!” he yelled, shoving the ship forward just as those lights came barreling towards them.

The black ship disappeared out of view above them as the Beacon shot downward away from it, faster and faster. The inside of the cabin started to shake violently, the clatter almost deafening.

“Just keep hitting the main thrust!” Cyrus shouted over the racket, stumbling over to the nav console and tumbling into the seat where he splayed himself out in relief. “We’ll be out of range soon.”

“Out of range?” Finn repeated incredulously, “How fast are we–” His eyes dropped briefly to the screen beside him. “Holy shit. Two hundred kilometers. Two fifty. Three?! How did you–”

“Well I siphoned all the ship’s power into the engine’s backup generator to overload the –” Cyrus started to explain, but Finn cut him off.

“Never mind, I don’t care,” he sighed in exhaustion, leaning back in his seat. “Just glad it worked. Y’know, Cy,” he mused, “you could give Fiear a real run for his money.”

“If he ever gets back on his feet, I’ll be sure to tell him you said so,” he grumbled as he tiredly swiped his hand across the nav console before him. “For now, let’s just get to Carthis.”

Snowflakes drifted slowly from the night sky, like falling ashes. Leta stood on the frozen ground beside the Beacon’s ramp, letting the frigid breeze pass through her limbs. The cold almost felt good — refreshing — after ten hours of urgent travel. But they’d made it: the Society ships had not followed them here.

“So this is Carthis,” said Ren at her side, breaking the stony silence. His breath turned cloudy in the air. Leta could feel his eyes on her. “And this is — what? Goodbye then?”

“Something like that,” Leta muttered. Her voice was hoarse and scratchy. “For a little while.”

Below the docks, a mile into the city and through the Carthian gates, were the rehabilitation facilities. Corra and Finn would take him there without her.

“I know.” Somehow, Ren almost smiled. “I know you would. But it’s better if you don’t.”

A heavy laugh escaped her lips. “Better for who?”

“Both of us. I need to get well, or so you keep telling me. But especially — especially for you. You’ve got a life put together now, one that doesn’t involve hunting me down. So I won’t take your time from you anymore. And I — if you’re at peace with all this,  then — “

“It’s over, isn’t it?” Leta knotted her scarf between her hands, then released it. “This? Us.”

He went quiet for several seconds, which Leta had to interpret as a yes.

Surprisingly, she did not feel loss plunge through her, nor grief. What she felt was tired — like she could lay down on the ground and sleep right there.

“I wish,” he murmured, “that I could make things right between us.” He took a step closer in the snow and grasped her wrist. “Because you did — you saved my life. You saved my life and I don’t know how to repay you.”

Leta could think of nothing to say. Exhaustion was tugging at her eyes.

“Just get better,” she managed at last, looking up. “Alright? Get better, so we can at least see one another.”

Behind her, she heard dueling footsteps: Finn and Corra were coming down the ramp, both of them ready to leave with Ren. Corra leaned in and whispered, “You okay, chika?” as she walked past.

“I think so,” Leta heard herself reply, as if the words were not her own, but she knew them to be true somehow. “I think I am, actually.”

“It’s a short walk,” said Finn, turning his wrist over and glancing at his watch. “Shouldn’t be long, and we’ll let you know when we get there, alright?”

Ren squeezed her hand for several more seconds, then locked his gaze with hers and nodded as he walked backwards a few step. Leta’s eyes were dry as she watched him turn and fall into step with Corra and Finn, disappearing down the path, out of view. 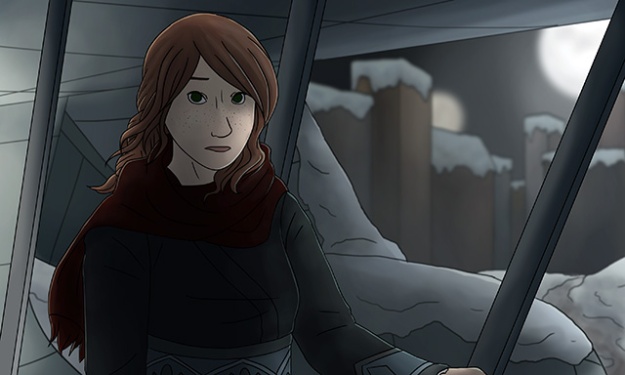