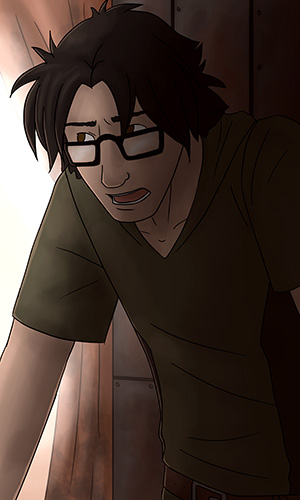 “Look, 300K is the best I can do,” Cyrus was saying, his voice straining as he tried to reign in his impatience. “So that’ll get me — “

“40 kilo-gals,” grunted the clerk across the counter, crossing his arms. “That’s my final offer, kid.”

That was all? Shutting his eyes in frustration, Cyrus heaved a sigh. That amount of ship fuel wouldn’t get the Dionysian much further than a neighboring moon unless they siphoned a considerable amount from the Beacon. Was it worth it?

At the very least, it would get his desperate crew off this rock. Everyone was in need of a change of scenery — not that this place even offered much scenery to begin with. The dry, dusty town had exactly one pub (which the crew frequented every night) and hardly any work or passengers to take in. Cyrus didn’t want to consider the word, but he couldn’t help but think it: stranded.

What was it Fiearius used to say when they were out of ideas and at a loss of what to do next? He always said they just had to make a move. It didn’t need to be the right move, exactly. Just a move.

What Cyrus wouldn’t give for some real captainly advice in this moment. But it wouldn’t come from Fiearius, of course: immobile in the infirmary bed, he hadn’t uttered a single word in four days. After weeks of shouting hysterical nonsense, for some reason, he’d gone entirely mute. Even Leta hadn’t been able to coax anything out of him.

Without making a final decision, Cyrus wandered out of the shop and started the slow walk back to the ship, his mind heavy as he weaved through the alleyways alone in the dimming afternoon sunlight. He’d been at this all day: negotiating for fuel, trying to trade his mechanic skills for a buck. Meanwhile, the crew was getting antsy and worried, and Cyrus couldn’t blame them. He’d told them they would stop on this planet for a few days at most.

They’d been here a month.

As he pulled himself up the Dionysian’s ramp, he looked up to see that someone else was walking down it: Dez. Before Cyrus could give a start of alarm, he saw the man’s hands were tied behind his back and Corra was on his heels, gun in hand.

Cyrus almost didn’t have the energy to ask. Almost. “What the hell are you doing?” he asked, exasperated.

“Taking him for his bi-weekly walk,” said Corra, jabbing Dez in the back with the rifle. “Trying to be a humane captor, y’know. Give him some fresh air. We’re gettin’ to be quite close friends, aren’t we, Cordova?”

Stony as ever, Dez said nothing, but he leveled Cyrus his cold, empty stare. Cyrus knew exactly what was coming.

“Let me talk to him,” growled Dez for the thousandth time. “Let me see Fiearius.” He’d been asking ever since they’d left Satieri, and Cyrus’ answer never changed.

“No,” he said at once and, turning his back on the two of them, continued up the ramp.

“Let me talk to him, Cyrus,” Dez called back, his voice just strong enough to make Cyrus slow in place. “I can help.”

Without turning around, Cyrus stopped at the top of the ramp and took in a deep breath. Clamping his eyes shut, he said in false, impatient cheer. “Okay. Sure. Let’s go talk to him. Right now.” He turned back to look at him. “You and me. Let’s go.”

Dez just stared up at him, empty and hollow as always. “No. I need to speak with him–”

“Alone,” Cyrus finished for him, nodding slowly. “Right. So you’ve said.” He gave it one more second before he provided Dez a sharp glare and snapped, “And until you change that stance, you’re not going near him.” Turning back towards the cargo bay, Cyrus walked on, waving his hand absently in the air. “Enjoy your walk.”

Eager to get away from the unsettling sight of Dez — and confident that Corra had things under control taking him back to his cell on the nearby Beacon — Cyrus trekked downstairs.

For reasons unknown, he’d begun to visit the Dionysian’s infirmary every few hours since Leta had moved Fiearius there, although he had no reason to. Though she claimed being in familiar territory would ground him, nothing about his condition would be different now than it had earlier. There would be no news to report. Fiearius would be on the exam bench (that Leta had turned into a makeshift hospital bed) and Leta would be bustling around the room, avoiding his eyes, trying to act as business-like and normal as possible. Nothing would be different at all. And yet …

“How’re things?” he asked Leta in the hallway. She was exiting the infirmary, pulling the door closed behind her.

“About the same,” said Leta calmly, though her expression told a different story: redness circled her eyes, her hair was limp and unbrushed, and she looked dead on her feet. And of course she did. Leta barely afforded herself sleep now, and Corra had to beg Leta to sit down for meals. Between Ren and Fiearius, she was running herself to the ground as a caretaker.

Pity touched Cyrus’ chest. But he also knew she wouldn’t have done anything differently, no matter what he said otherwise.

“Vitals are good,” she went on. “And he is getting stronger on his feet now. But … “

Cyrus felt a smirk come to his face. “But still feels like you’re talking to a wall?”

Through the door, Cyrus glimpsed Fiearius: sure enough, he was slouched against pillows, jaw rigid, staring straight ahead like a mental patient.

Leta began to smirk herself, sadness in her eyes. “And just think, I used to wish he’d be this quiet. Now I sort of regret telling him to shut up so many times … “

“I don’t know which I like less,” Cyrus remarked grimly, “the silent treatment or the inane babbling before. I guess at least he’s not shouting at his hands anymore … “

Leta’s smile thinned from her face. Suddenly, she tilted her head at him in earnest. “Hey. Why don’t you give it another try?”

Cyrus hesitated, watching as Leta stepped back and opened the door for his entry.

Cyrus said nothing. His heart clenched in his chest. He wanted that to be true. He really did. He wanted to help.

But the vacancy in his brother’s eyes was reason enough for Cyrus to falter and mumble,  “Uh — maybe later. I’ve got some work to take care of. But hey, come by the bridge later, I want to check in with everybody. Just in case something, somehow, miraculously, has changed.”

Unsurprisingly, Leta’s expression fell with hurt and disappointment. But she slowly closed the door behind her and like the true friend she was, she didn’t push the subject.

“Right,” was all she said, averting her eyes as she started to walk away. “I’ll meet you in the bridge in a bit.”