“Found by her husband and seven year old son,” Fiearius went on, his half-lidded eyes on the floor, “on the balcony of their westside apartment at 3:26 am, October 11, 1853.”

Leta stepped closer, confusion in her face. “What’s he saying?”

“I don’t know –” Cyrus breathed, surveying his brother in alarm. But then, Cyrus realized there was another voice in the room: not Fiearius, not Leta, but a robotic, mechanical voice from the speaker in the wall, quietly droning on in the background.

As if giving a lecture, the speaker said, “A trail of blood was recorded leading from the balcony inside the apartment to the dining room. Based on the spatter pattern on the dining room table, it can be assumed–”

“–that this is where the first shot was fired,” Fiearius finished, reciting along with the speaker, his voice cold and empty. “The trail indicates Ms. Sana survived the first shot and crawled to the balcony where she was shot again.”

Cyrus was aghast. Fiearius was saying each sentence in unison with the voice from the speaker, word for word, as if in a trance.

Cyrus looked up to Leta for explanation, but she looked just as horrified. She didn’t move for several seconds until Fiearius — in time with the overhead voice — began, “Pentin Quet, age 43, was — “

With that, Leta seized his shoulder.

“Fiearius come on, we’re getting you out of here,” she barked as she reached down and unwound the bonds around his wrist.

Without hesitation, she started to try and lift him up. Cyrus immediately went to her aid as Fiearius prattled on deliriously, apparently oblivious to what was going on.

“Suppose we can’t take the elevator back up,” Cyrus grunted as they struggled to drag Fiearius’ mostly dead-weight into the hallway.

He glanced frantically around the corridor, knowing that any direction could just lead to a maze. Or a dead end. Or worse, a Society agent. It was bad enough walking through here with just the two of them, but with Fiearius hanging weakly between them, there was no chance an encounter would end well.

“This way,” Leta decided and offered no explanation. Perhaps she had none, but Cyrus was appreciative of the direction nonetheless. Together, they hobbled as quickly as they could as Fiearius continued to read off — what were they? — police reports? Homicide records? Cyrus tried not to listen, but even so, the gory details he described seemed to slip through.

Which was why he was grateful for the distraction when Leta suddenly said,”Cy — Cy, I think I’m getting a better idea of what this ARC thing is.” She looked over at him, grimacing. “It’s what they did to Ren. I found traces of a mild hallucinogen in his system. I think they use it to mess with their minds, I bet that’s what they’ve been doing to Fiear for the past few days too. Remember that shot they gave him on the Baltimore?”

Cyrus regarded Leta with a concerned stare. “What, like — mind control?”

“No, no, more like, amplifying the power of suggestion. Propaganda. Brainwashing. Making them believe — these horrible things. And we all know the Society’s not above employing drugs to get people to do what they want.”

Cyrus still couldn’t stop staring at her in shock. How long had they been doing this? Manipulating prisoners to their will? It sounded cruel at best and inhumane at worst. Though despite that, Cyrus could not say he was that surprised. All he really wanted to know was, “Is it reversible?”

But it wasn’t Leta who answered.

“No,” said Fiearius quietly from between them. “No no no,” he went on, his voice growing stronger as he looked around at them, steadied his feet, and started to pull his arms away. “What are you doing? What are you doing? I need to go back.”

Cyrus exchanged a worried look with Leta and suggested hopefully, “Yeah, back to the ship.”

“No,” Fiearius said again, trying weakly to pull his arms out of their grip. “I need to go back. Take me back.” His voice was growing louder as his legs scraped pathetically at the ground, desperate to stop them.

Leta circled Fiearius’ arm around her neck and gritted her teeth. “No, Fiearius. Back to the ship.”

Fiearius groaned at her, pained. “Why can’t you ever do what I ask?”

“We’re getting you out of here, Fiear!”

“Don’t you know what I’ve done?!” he shouted. “What I’m still doing? I’m holding the Society back, don’t you get it? I need to give back what I took! I need to give it back. I have to!” His voice echoed down the hallway.

“Hear the ruckus?” came a slow voice from behind them as a tall lanky man with a long face and crooked nose approached them calmly, two armed guards flanking him.  “So this is the famous rogue Verdant, hm?” He glanced to Leta and Cyrus. “Isn’t he supposed to be in his cell?”

“Doesn’t matter, do it here,” Fiearius answered quickly, wrenching his arm from Cyrus’ grip and nearly falling over. “Just take it. Do it now.”

“The Society needs a Verdant, Cy,” Fiearius assured him, breathing hard. “This is him.” He gestured to the lanky man who was watching this with interest. “I just have to give him the CID. And everything will go back to normal.”

Cyrus was speechless. Back to normal? If normal meant — dead.

Abruptly, as if snapping back to life, Leta side-stepped in front of Fiearius, threw out her arms, and yelled, “No!” Fear and anger filled her face, like a roiling storm, even as both guards cocked their guns and directed them at her chest. “No, I won’t let you kill him — this can’t go on — “

“Don’t you people understand?!” he yelled. “This needs to happen. It’s inevitable.”

“Shut up, Fiearius!” Leta yelled desperately, but Fiearius roared over her.

“You don’t understand! I need this! I need it out of me! I need it gone — just fucking do it,” Fiearius demanded, glaring at the guards, “Just fucking kill me and be done with it!”

The man — the new Verdant? — raised a brow thoughtfully and shrugged. Calmly as ever, he pulled his gun from its holster and aimed it at Fiearius’ head. “As you wish,” he said and a gunshot filled the hallway.

Cyrus’ heart halted in his throat.

And then there was another gunshot. And another. Blood spattered on the wall. And the Verdant-elect and his two guards were on the floor.

Fiearius was the first to spin around. “Wha–” he began before taking a fist to the gut. What energy he had left him and Cyrus and Leta only barely managed to catch him as they both looked up, terrified and confused at the face of Dez, his pistol still smoking lightly.

Cyrus didn’t know if he should have been relieved or horrified at the sight. “What’re you doing?!” he cried, and Dez regarded him calmly.

“Changing my mind,” Dez remarked shortly, and then nodded down a corridor. “This way. Follow me.” 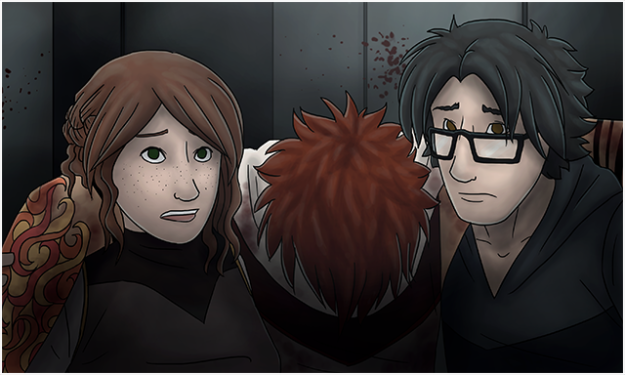