“He’s lying, Fiear!” Leta’s throat was raw from yelling. “He’s lying, don’t you fucking believe him –” But Fiearius said nothing. His expression was empty, his eyes boring onto hers, stunned into silence.

“Say goodbye though, Fiearius. We’ve got a long journey back to Satieri.” Dez nodded to the guards who moved over to lift him from his chair.

As they lifted him from the chair, finally Fiearius seemed to lose his sense of shock. The confusion on his face swept away, his expression darkened. A storm arrived in his eyes as words ripped from his throat.

“You,” he began, sounding breathless, his eyes fixed on Leta and filled with fire. “You fucking lying bitch!”

Leta could hardly breathe. “It’s not true! Dez is playing you, Fiear!”

“Fiearius — “ Cyrus interrupted meekly, but Fiearius roared over him.

“This?!” he went on, struggling against the grip of four men as though he wanted to lunge across the room at her. Something strange was in his eyes. A haze, of sorts, one that he seemed unable to break through. “After–dov’ha pe’stieren ti dah hes’ziah! After everything! After all I did for you?! This is what I get in return?!”

“I don’t work for them,” Leta cried as muddled Ridellian curses continued to spit from his mouth “– not anymore, I didn’t lead you here, I wouldn’t turn you in — you know me, Fiearius!”

In a pleading voice, Cyrus broke in. “Fiearius, you can’t really believe this shit?”

Fiearius’ fury swung towards him. “You–you knew, didn’t you?!” he growled, malicious masking his face. “You were in on this too?!”

In the corner, Dez observed with curious interest, his eyebrows arched.

“What are you talking about?!” Cyrus gasped. “There’s nothing to be in on!” 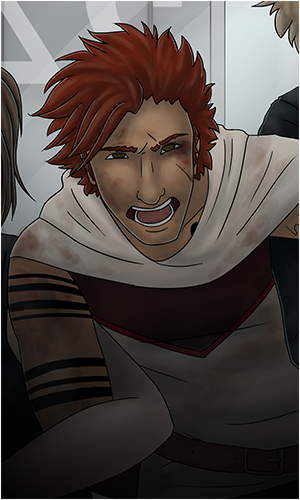 “Bullshit,” Fiearius growled as the agents tugged on him again, finally on the threshold of the door. “I trusted you!” He turned back to Leta viciously. “I trusted you.” With one final heave, the agents wrenched him through the door, but his voice still carried down the hallway as he shouted, “I hope you’re fucking happy! I’erna le si ca’edie fi’et!”

Stunned silence enveloped the room for several long seconds, punctuated only by one dry sob heaving from Leta’s chest.

Cool as ever, Dez cocked a brow and muttered, “Effective…” After a moment, he turned back toward his agents in the room. “I’m sure they’ll want to send the girl back to Vescent soon,” he instructed calmly. “Under careful monitoring, of course. And the brother, we’ll send him wherever he’ll be most useful. For now, secure the three of them in temporary cells. An agent with the proper jurisdiction will follow up with instructions.”

With one cursory glance over the room, he turned and followed Fiearius’ fading yells.

Leta was screaming, screaming her lungs out, but Cyrus could barely hear her. Numb with shock, he watched, transfixed, as Fiearius was pulled through the door, struggling and wrestling the whole way, his guttural yells echoing down the hallway as he was torn from view.

He’d never seen his brother so desperate. He was, quite literally, fighting for his life.

Unthinkingly, Cyrus jackhammered out of his chair. To do what, he didn’t know, but it didn’t matter: an agent grabbed his arms at once. Two more did the same to Leta and Ren and in a flash, they were all being marched into the hallway.

Leta was not going quietly, even as Ren assured her, his voice pleading, “they won’t hurt you, Leta, I promise it’s okay — “

But he was right, thought Cyrus. They wouldn’t be harmed, they couldn’t. Dez said it himself: Leta would be sent home to Vescent, to her father, to be watched and monitored and scrutinized by a team of therapists. He himself would be assigned to some engineering team, forced to continue the work he’d abandoned four years ago. They wouldn’t be hurt. But they would be imprisoned.

Fiearius, however, would not enjoy the same fate. The Verdant CID embedded in his arm. They would want to reclaim it. He wasn’t useful alive like Cyrus or Leta. If he was going to Satieri, he was going to be —

“Executed,” Leta breathed at his side, wrestling the agent at her back. Her voice shaking so badly she could barely form words. “They’re going to execute him, aren’t they?”

The words shook something within Cyrus’ chest. Something dark, something — alarming. Before he could think to do otherwise, he let out a growl, pivoted on his foot, wrenched his arms away and slammed his bound wrists into the agent’s face.

Startled, the agent stumbled backwards and Cyrus went in for another hit, adrenaline rushing through him, and then another, and then another. His wrists may have been bound, but they weren’t useless. They pounded into the guard’s neck, his knee found his stomach, his elbows rammed his side.

Bleeding and shouting, the agent scrambled for his gun, sending panic flying through Cyrus. He lowered himself, braced and rammed his shoulder into the man’s stomach downwards. His back collided with the metal ground with a thump and Cyrus at once pinned him there with his knees, reaching his tied hands for that holster on his hip desperately.

But before he could even lay a finger on it, he felt a rough hand dig into his shoulder and drag him upwards. Still clawing at the gun’s grip uselessly, Cyrus was lifted back to his feet and spun around to face the woman who’d been leading Ren just as her disapproving frown gave way to a distorted cry of pain and she crumbled to the ground, blood spurting from her leg.

She’d been shot — but how? Cyrus wheeled around, half-expecting to see his brother towering there, in all of his heroic glory.

But it wasn’t Fiearius, it was Leta, holding aloft a stolen gun. It seemed his scuffle had given her just the distraction she needed to arm herself and turn the situation in their favor, at least fleetingly.

While he stood in place dumbly, feeling stunned, she rushed over to him and hastily untied his wrists, then did the same to Ren.

“Leta,” said Ren, carefully, watching her as if he’d never met someone so insane in his life, “Do you know what you’re doing?”

“No.” Leta crouched down, retrieved another gun from the floor and passed it to Cyrus. “No, of course not, now let’s go.”

Blindly, gun in hand, Cyrus turned and bolted down the hallway and kept bolting until his feet found the metal floor of the airy open hangar once more. All around him, enormous ships the size of houses were parked side by side and Cyrus dodged beneath their wings and pillars. It wasn’t too late, he told himself desperately — it wasn’t too late to get to Fiearius.

Only dimly aware of Leta and Ren running behind him (Ren was protesting, Leta pulling him along), Cyrus suddenly stopped short at the sight of one vessel in particular. Larger than a cathedral, it must’ve been half a mile wide — but that wasn’t what suddenly made Cyrus’ heart stop.

He recognized this ship. It was a Satierian ship. And Fiearius was headed to Satieri.

He must have been inside.

Gripping his gun with determination, Cyrus shot forward, ran up the ship’s ramp and into the large, open cargo bay. It was empty and quiet, at least five times the size as the Dionysian’s.

“What ship is this, Cy?” said Leta desperately, her hand circled around Ren’s wrist, leading him forward like a confused child. “Is Fiearius aboard, are you sure he’s aboard this one?”

“It’s the BKN-550,” said Cyrus as he rushed through the bay, his eyes flitting back and forth for signs of movement. “But they call her the Beacon. A Satieran frigate.” The ramp was beginning to close behind them and he could feel the low vibrations from within the ship radiating out beneath his feet. She was getting ready to leave. “Fiearius has to be here,” he gritted out, though it was more an assurance to himself than it was to Leta.

Without looking back, Cyrus ducked into one of the Beacon’s smaller hallways, determined to reach the bridge and stop the ship before it could leave the Baltimore. He couldn’t let it. He didn’t exactly have a plan yet. March right into the bridge and demand Dez let Fiear go didn’t sound like it would work all too well. But he had to do something. Cyrus wouldn’t even humor the notion of losing him and what that would mean. He wouldn’t. He couldn’t.

His heart was pounding in his chest as he slunk through the maze of cold metal hallways as quickly as he could, Leta and Ren on his tail. The ship was mercifully quiet enough to avoid confrontation with the few Society agents he caught a glimpse of. It seemed to only be running with a skeleton crew. Well, how much crew did the frigate need to simply transport a passenger to an execution? he thought grimly.

What the Beacon lacked in crew, however, it made up for in size, an obstacle in itself. Cyrus wasn’t convinced he would ever find the bridge at all let alone make it on time until he turned a corner into a hallway and laid eyes on it.