As Cyrus, Leta and Ren fled the interrogation bay, one thing, at least, was unfolding in their favor: the further they traveled from his cell, the more lucid Ren became. He seemed to be emerging from the haze and move with more strength, though there was a slight unsteady catch in his legs and hips — it was heartbreaking to see, as Leta realized he had not done much walking in the recent past, let alone half-running. It was like his body had forgotten how.

Following Cyrus, Leta swung Ren’s arm around her neck, holding him upright with her. She was moving as quickly as logistics would allow, panic and determination burning in her chest: forget everything else, forget herself, she simply had to get him as far away from this hell as possible and then deal with the consequences.

” — we just have to get to the hangar,” she was explaining in a breathless undertone to Ren, who hadn’t taken his eyes off her once yet, “the ship’ll be ready — “

“Ship?” Ren repeated, his voice less gravely now, and sharpened with confusion. He regarded the back of Cyrus’s head shrewdly, and then looked at her in alarm. Leta could just imagine what he was thinking: the pistols at her hips (his doctor was armed?), the tears in her dirty clothing, the general, sweeping unkemptness of someone who had not seen real ground in months . . .

“A pirate ship,” he muttered darkly, his voice tightened. “I’ve been hoping for months that wasn’t true.”

Worry drenched his voice, and Leta hurried to say, “I — oh gods — it’s not, it’s not like that,” she breathed quietly, her eyes showing alarm. “At least, not totally. It’s — “

But there was no way to explain the Dionysian at all, let alone in this urgent moment.

” — a long story,” she finished, softening and feeling a rare smile pass over her face. And in spite of it all, even as Ren shook his head at her in utter bewilderment, he started to smile slightly, too.

Ahead of them, Cyrus paused at the cross-section of hallways and ducked beside a wall, readying his gun in his hand. “Here, the hangar’s just up here.”

Hope exploded in Leta’s chest.  Noise and chaos reached her ears, but the edge of the Dionysian’s rusty exterior was visible. They were so close.

Leta circled her hand more tightly around Ren’s wrist and stepped forward, but it was then that Ren went suddenly very rigid against her.

“Leta, listen,” he stated, his voice eerily calm. “Listen to me. I can’t leave.”

“Of course you can,” Leta said sharply, stepping forward, determination in her step. The Dionysian was a hundred meters away. “And you are. Okay, on three we’re going to — “

“No. I can’t. I won’t.” Ren slowly slid his arm away, and his voice became cold, robotic when he stated, “Leta, the Society needs me.”

Leta froze. She turned to gaze at him. Even Cyrus looked over his shoulder.

Ren’s eyes were wide and sincere. “The Society needs my help. I’m here to help, Leta.”

“No,” said Leta quickly, shaking her head, trying to quell the panic in her chest. “No, Ren. You weren’t helping. You were their prisoner.”

“It was a sacrifice I had to make,” he explained calmly, as if she were a child. “I was happy to do it. I am happy.”

Bile was burning in Leta’s throat. “Ren, no — what — what did they do to you?” she breathed, failing to keep her voice low as she looked him up and down. He was too weak to stand, he was positively gaunt from malnourishment, and now he was talking like he’d been brainwashed.

“Help me pull him,” said Leta sharply to Cyrus. She never thought she’d ever have to use force on her fiance, but they were running low on time. “Get his arms — “

But Cyrus wasn’t listening. He wasn’t even looking at them anymore.  He was turned toward the hangar entryway, one hand  tightened around his gun, his face gone pale.

“Something’s wrong…” he murmured and Leta followed his line of sight towards the ship. She hadn’t considered it at first, but now it hit her. They’d left the ship in a state of violence, surrounded by agents and defended by their captain. Now? The violence, the agents, the captain–they were nowhere in sight. Instead–

“Ah, there you are,” came the sudden voice of Dez, as he casually traipsed towards them across the hangar. Armed agents circled around him and began to train their guns on the three of them. Fear plunged through Leta, and before she could move or speak, Cyrus stepped in front of her, a protective shield. Ren stood there numbly.

Dez eyed him for a moment like a giant might observe an ant. “Let’s not, shall we, Cyrus?” he asked. It was technically a question, though it sounded a lot more like a statement. “I’ve no interest in hurting you,” he clarified calmly, glancing between the three of them. “Any of you. But surely you understand that I can’t let you leave either.” He nodded his head towards the guards and they instantly swarmed towards them. “Nothing personal.”

He had a sword, Leta realized — a sword held loosely in his hand, and it glittered with shining blood. Leta felt sick. Did he have Fiearius already? Hoping to death that the captain was still freely out there on the Baltimore somewhere, waiting to pull off a particularly reckless and amazing asshole move, Leta immediately stepped to Ren.

“Stay close to me,” she breathed softly as guards seized them all by the arms, removed their weapons, and dragged them to the containment unit below. 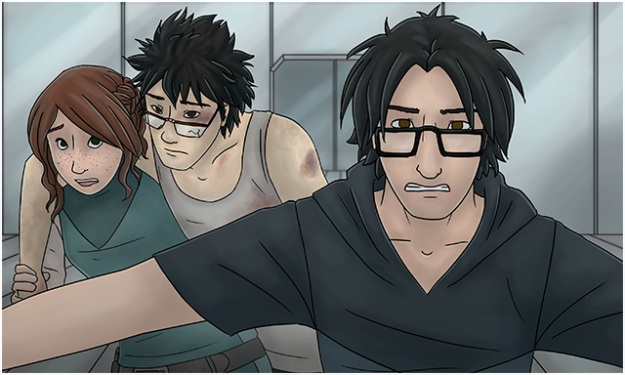