“She deserves to know, Fiear,” Cyrus said coldly. Fiearius groaned and pressed his palm to his forehead. Twenty minutes ago, he agreed. Now?

“Does she though?” he asked grimly. “Does she really?” Before Cyrus could even answer, he growled, “And you know she wouldn’t take that as an answer anyway. She’d just go–I don’t know–try it herself and get killed.”

“So what, you’re just going to never tell her? Keep leading her on thinking you’ll help when you won’t?”

“No,” Fiearius snapped sharply. “I will help.”

Cyrus’ eyes widened. “Oh I see. You’ll just get yourself killed in her place. Great idea.”

“I don’t really have another option, Cy.”

“You mean besides just talking to her like a normal human being with decent communicative skills?” He shook his head. “You can’t step foot on that ship and come back from it.”

“Maybe,” Fiearius admitted with a shrug.

“Maybe?! You mean probably.” Cyrus rolled his eyes and held up his hand as he grumbled, “I don’t want to know what happened, really I don’t, but please tell me you’re not set on this out of spite.”

Fiearius glanced over at him, raking his hand through his hair. “No,” he decided firmly. “Maybe when I walked in the room…a little. But. No.” He looked away and stared solemnly at the floor. “It’s not spite.”

“So it’s stupidity then.”

“Trying to redeem yourself with a noble sacrifice?”

“Or do you really just care about her that much?”

Finally, Cyrus looked over at him, tilted his head and waited pointedly for an answer. He got none save for an averted gaze. “If you do, you shouldn’t be planning a suicide mission then,” he concluded at last. “You should just talk to her. Tell her the truth.”

Fiearius simply glared at the floor and shook his head and Cyrus groaned. “I don’t see why you can’t just be honest about it when–”

“Because I know what it’s like, Cy,” Fiearius interrupted at once, finally looking up at him with a cold hard gaze. “I know what it’s like to lose the person you care about more than anything and to know that no matter what you do, no matter how far you travel for however long, you’ll never see them again.” He paused and looked away again. “And I don’t want her to go through that. I don’t.”

Cyrus it seemed didn’t know what to say. After a tense silence, Fiearius spoke again, more calmly. “She has a chance. It might be small. But it’s a chance. If it were Denarian–” he swallowed hard, “–if it were my son? I would do anything. Absolutely fucking anything to get him back. So I get it. And I’ll do it. Because I told her I would. I gave her that hope that it could be done. And I won’t take that away from her. I can’t.”

A long silence passed between them. Fiearius rested his head in his hand and finally let out a confused, quiet laugh. “I guess Aiden was right. I am doing this for the wrong reasons.”

Cyrus looked down at his hands and then slowly up at his brother. “Sounds like a pretty right reason to me,” he commented with a shrug. The two siblings stared at one another thoughtfully until Cyrus cracked a weak smile and remarked, “Well. Impossible, right?” He turned back to the console with the blueprints. “We’ve done impossible before.” He smirked again. “How bad can it be?”

For most of the day, Leta kept to herself, pacing her room, attempting to read, anything for a distraction. She knew she owed Fiearius a conversation and she spent hours rehearsing it in her head. I’m really sorry this happened, she’d tell him. I’m really sorry that I let things get out of hand …

She’d keep a safe five feet from him. There was no chance of this happening again, no temptation, no more slip-ups. No more late-night talks. No more story-telling with no one else around. No more whisky. After dinner, she vowed to do it. After dinner she’d find him to talk.

When she stepped into the mess hall that evening, she was startled to see most of the crew crowded inside already, filling the tables. No one was eating, but murmuring curiously and staring at the entryway expectantly.

“What’s going on?” she asked the room at large, slipping through the door.

“Cap’n called us all here for a meetin’,” grunted Rhys from his table. “Dunno why. Come have a seat, Luna.”

“Leta,” she corrected automatically, lowering into a seat beside Corra, who shrugged at her, equally as confused.

Seconds later, Fiearius materialized in the doorway. The crew hushed at once. It occurred to Leta there had never been anything resembling a formal meeting led by Fiearius in all her time aboard.

But it was clear now: something was off. Something was different. His expression was grave as he paused in the doorway, massaging one of his fists in a thoughtful sort of way as Cyrus hovered behind him. For the briefest of moments, their eyes locked from across the room, but then he moved his gaze to the side and addressed them all.

“At 1800 hours, the ship’s setting off for its next destination,” he said, his voice oddly calm. “Most of you, however, won’t be on it.” He waited a moment for the confused looks and hushed whispers of confusion to pass before continuing. “We’ll be heading to the prison ship TTD Baltimore to retrieve one of its prisoners.”

Shock hit Leta’s chest. She could feel Corra looking at her in surprise, but Leta didn’t move. She felt paralyzed and dizzy. They were going after Ren? Now? After all this time?

“It will not be safe,” Fiearius went on, not looking at her, but the whole crew, “It will not be easy. And I will not put any more people than are necessary in the line of that danger.”

With his audience once more completely captive to his word, Fiearius began to take paces across the floor, weaving his path in between the tables and speaking as clearly as he could. “Most of you will be departing over the next hour with any belongings you feel you need. There are arrangements already made for your lodging in the city. Give them my name, you’ll all be well taken care of. The only people I need on hand are myself, the first mate and the doctor. If you’re not one of those people, time to start packing.”

“However, I also would like two more able gun hands,” he went on suddenly, his eyes drifting vaguely towards Corra and Finn. “But considering the risks, I’m not asking. If anyone feels compelled to volunteer, let me know. Otherwise.” His eyes swept back across the entire room. “The ship will return here for you ideally by the end of the week. If it’s not back in a month?” He raised a brow at them curiously and shrugged. “Might be time to find a new ship.”

“If anyone has any questions, please direct them to someone who is not me,” he finished shortly with a bitter smirk. Then he turned to Cyrus. “Let’s get her started up, shall we?” He patted a wall of the ship affectionately.

As he turned to leave the mess hall, Fiearius glanced over his shoulder once more, scanning the room before his gaze found Leta’s. He met her eyes and gave her one slight nod — as if they’d agreed on something, something unspoken — and followed Cyrus downstairs. 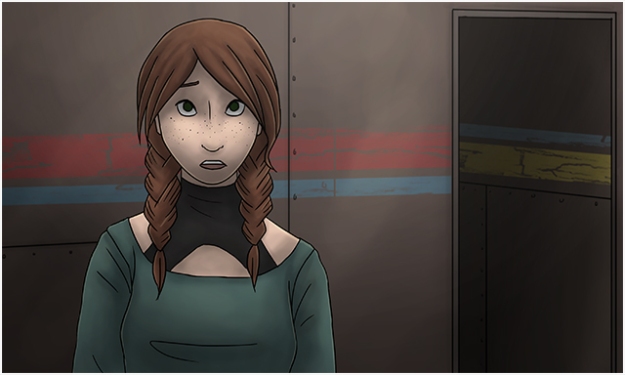