“Fiear,” she prompted quietly, slipping a hand over his forearm and taking backwards steps to the ship.

But he resisted her pull. “What other arrangements?” he demanded to know. “What does that mean?”

This time, he relented, stepping backwards with her although his manic stare was still locked onto his old friend. “What the hell are you playing at…” he muttered quietly.

“Always a pleasure seeing you, Fiearius,” he called after them as they retreated. “Safe travels. I’m sure we’ll run into each other again soon. Real soon.”

Even from a distance, Leta could see the unsettling smirk that twisted his lips. But she pushed it out of her mind as she hurried downstairs to the infirmary and opened the prized, treasured med kit, to begin treatment at last.

Hours later and a system away, as she hovered nervously in the shadow of a building, Corra couldn’t help but glance over her shoulder, satisfying her paranoia that someone from the ship had followed her. Fiearius, maybe — after all, he’d be wildly horrified, furious if he knew —

But it seemed there were only two people in this dark alleyway, for better or worse.

At last, Dez broke the silence.

“This is it?” he murmured, turning the small black sphere over in his hand, admiring it in the dim light.

Corra’s eyes shot back to him, every inch of her wishing she was elsewhere. Fiearius was right: this man was completely unnerving. He was so — silent. And cold. Soulless as a statue. Every careful and calculated move he made gave her the distinct desire to bolt for her life. But she couldn’t. Not yet.

Not until she had a promise.

“Yeah, that’s it,” she assured him breathlessly, trying to sound more confident than she felt. “That’s a Caelum Lex. Last in existence.” Dez turned it over in his hand once more, cool and thoughtful.

Meanwhile, Corra was riddled with nerves and desperate to get back to the ship before anyone noticed she’d been gone. Gods, what would Leta say, if she knew she was making a deal with this man? But it was for a good reason. Fiearius’ plan to run never would have worked. And where would the Dionysian be without him? Corra didn’t have a choice. Surely Leta would understand —

“So we’re good, right?” she added quickly, and at last, Dez’s dark eyes flicked up to hers.

But he said nothing. She pretended that stare didn’t cut straight through her defenses. She pretended she didn’t feel the wave of paranoia that she wouldn’t be leaving here alive. She pretended she wasn’t more scared than she’d ever been. And she pressed on, “You let Fiear go, I gave you the Caelum Lex, that’s what you agreed to, right?”

Silence hovered between them. Corra could feel her panic starting to mount. Should she have ran? But just as her feet started to mobilize, he finally spoke.

Corra nodded weakly and abruptly turned away to get the hell out of there. But on the edge of the alleyway, something made her turn back. Uncomfortably, she met his stare and said, “Just…leave the Dionysian alone, alright? Please. Just let us be…”

The dark eyes didn’t move, but something about them seemed to change. Was he smirking? Whatever it was, it made the skin on the back of her neck prickle, and she hurried away into the street, her heart still pounding. 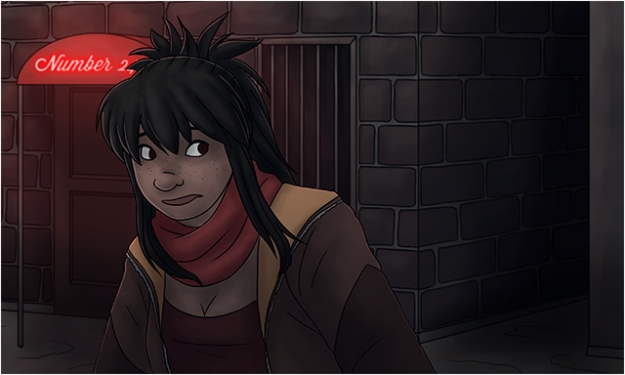