“And I’m taking care of myself,” she breathed fiercely. “Alright? I just need the correct medication. It’s just only in Society hospitals because it’s such an aggressive treatment, no drug dealer can get their hands on it to just dole it out on street corners, unfortunately. And obviously strolling into a Society Intensive Care unit is — ” Before she could stem it, a tortured laugh escaped her. ” — tricky. They’re rather protective of their medication. Not even an option –”

“Sure it is,” Fiearius interrupted at once. He spoke so confidently it actually threw her for a moment. But only a moment.

“No, it’s isn’t. Of course it’s isn’t. Remember what happened last time we went near a Society planet? This ship was almost blown up, if you recall.”  Leta clapped her forehead where she felt a fever prickle dully behind her flesh. “Gods,  you’re insane — “

“No I’m not,” was his immediate response as he shrugged one shoulder. “I do lifts like this all the time. If that’s the only place you can get the stuff, I’ll just go get it.”

Leta was agape. “You,” she breathed, “are not going anywhere near a Society hospital. None of us are. I’ve been looking for ways to get the medicine off the black market — ”

Fiearius furrowed his brow, crossing his arms over his chest. “Let me guess. Not going so well, is it?”

Leta faltered and fell briefly silent. It was even worse saying this all out loud. Especially to Fiearius. It was like being exposed, naked, right in front of him. Steadying her voice, she breathed, “It’s really risky to run with Society goods, no one wants to do it, and the people who do — they could sell me out  — ”

“Yeah,” Fiearius agreed shortly, still regarding her intently in that way that made her want to flee for the hallway or just punch him in the face. “I coulda told ya that. Ages ago.” His frown deepened. “I mean, if I knew.”

He was torturing her. Even when she was this close to death, he still enjoyed torturing her. For one awful moment, Leta felt the back of her eyes burn, but thank the gods she managed to laugh sourly, “Let me guess. You have an idea?”

Fiearius continued to glare at her, though the anger slowly started to fade into thoughtfulness. Finally, he answered with a careless shrug, “Yeah. I’ll just break into a hospital.”

“Yeah, yeah, okay,” he muttered distractedly before releasing a long sigh. It was a long time before he even moved again. He merely stood, still and silent and staring upwards. Until finally he took in a deep breath and his eyes clenched shut.

“I think…” he began slowly, still not looking at her. “I think I know someone who can get it for us.”

Fiearius eyed her a moment and sighed again. “An uh — old friend,” he replied at last and seemed to want to leave it at that. But Leta just continued to stare at him expectantly until finally he continued, “Look, if anyone can get it, it’s Dez.”

It was, quite possibly, the least assuring plan Fiearius had ever conjured. She could have sank to the floor in disbelief.

“Dez?” An actual laugh breathed from her lungs. “Your old ‘friend’? The guy who has been hunting you? The last time we ran into Dez, I believe you made us flee for our lives –“

Fiearius rolled his eyes again and snapped, “Yeah I’m aware of that, thanks, but what other choice do we have? You’re right, I can’t go to the hospital to get it myself, there’s nobody who’s gonna risk dealing Society drugs especially not to Society fugitives and if they’re so uptight about keeping it locked up, we need someone who has that kinda access anyway or by the time it gets to us, it’ll be too late.” He took a deep breath and glanced seriously at the door. “Dez could get it and get it fast. Without issue. Dez is the only one. It has to be him.”

“No.” Leta’s voice, for the first time, was heavy with real worry. “No. We’re not going to him. Dez wants you dead, Fiear.”

“He doesn’t want me dead,” Fiearius corrected at once. “He just wants me returned to Satieri.” He paused. “And probably then dead. But it’s fine. At least I have something he wants at all. Leverage. It’s good.”

“Leverage?” Leta repeated in disbelief. “You don’t mean — you’re not going to turn yourself in, are you? Please, gods, tell me you aren’t that stupid — “

“Of course not,” he growled, an image of irritation. “I’ll just tell him I will. And then take the drugs and run.”

“Probably,” Fiearius admitted. “But it’s our only option, so I’m taking it.”

“Absolutely not,” said Leta, full of steel, “We’re not using Dez. We’ll find someone else to help  — anyone else — “

But Fiearius shook his head. “Ain’t no one else, kiddo. It’s Dez or death.” He cocked a brow at her in challenge and then turned to stride through the door. Over his shoulder, he added,  “And to hell if I’m just gonna stand here and watch you die.” 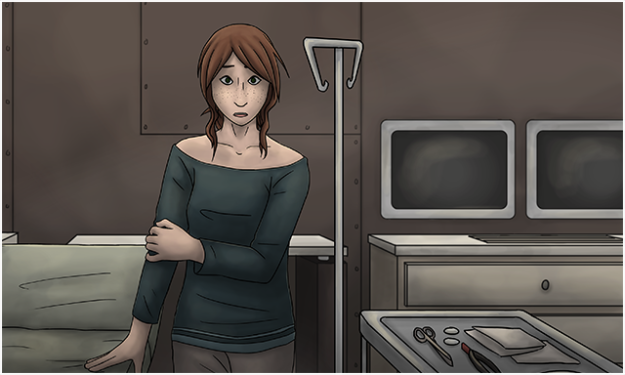