“Of course. At that point, I was the prime agent of Internal Affairs, along with Dez. Which meant we were used to the most dangerous jobs and the most responsibility. Natural way of things, then, to offer me the Verdant gig.” He took a deep breath here and looked down. “Unfortunately, job offers from the Society aren’t made of paperwork and signatures. And the poor bastard who already had the position? He hadn’t left yet…”

“I didn’t want to,” he defended instantly. “I–they wanted me to. The council wanted me to. Which was very reassuring, considering doing so would cause me to take his place and probably end up in the exact same boat sooner or later.” He rolled his eyes. “I didn’t want it. At that point, I just–I wanted to leave. Get away from all their fucking games and bullshit and–I was tired of so much fucking death. But–” His words caught in his throat as the memory of that very fateful afternoon, something he often tried to forget, came flooding back to him.

Finally, he swallowed the lump in his throat and finished, “But they made me an offer I couldn’t refuse. So I did it. But I…I couldn’t stay. I couldn’t be–I ran…” He looked down at his hands, fidgeting nervously in his lap and frowned.  “I just…ran.” He sighed heavily and looked up at the ceiling. “Which wasn’t easy, mind you. Any legitimate ship would have all eyes on it looking out for me and they’d cut me off from all my accounts so buying myself passage on an illegitimate ship wasn’t even an option regardless.”

“Fortunately, there was still one person out there not buried in the organization and with enough spare cash to help me out,” he explained. “And you know what they say about the thickness of blood. Even after ten years of separation, all it took was twenty minutes of shouting for Cyrus to agree to lend me a hand. And a few hundred thousand credits to buy this beauty.” He gestured up at the ship around them.

“I always wondered how you got this ship,” said Leta thoughtfully, glancing up at the ceiling with unexpected fondness.

“Not that it did me any good at first,” Fiearius went on. “At the time I didn’t know what I had run off with.” He turned his wrist over to examine it. “When you join the Society, they implant a unique CID right here.” He tapped the base of his hand where the identifying microchip had been injected oh so many years ago. “That way you’ll always have access to your information and it’s impossible for it to be stolen or lost or…anything. It’s just there. Always.”

He took a deep breath and leaned forward again. “It’s sort of an archaic system at this point, but the Verdant’s CID is…special. Not only does it have full access to all of the Society databases across the whole span in every department. More than that. It’s…uniquely transferrable.” He grimaced as he explained, “Society weaponry carries data signatures specific to its user. When I shot the Verdant? His CID wiped clean. And mine…got a lot more expansive.”

He’d captured Leta’s attention now. Her mouth was hanging open. “You have access to the Society’s complete database?”

“How do you think I was able to find the Baltimore so easily?” he asked with a shrug. “I have everything. Everything they don’t want me to have. And until someone else comes along and ‘transfers’ it away? They can’t have it back.” He smirked tiredly. “They built the Verdant system to be unreasonably secure. Unfortunately for them….they picked the wrong Verdant and now they’re stuck. Can’t choose a new one ‘til I’m dead. Can’t kill me ‘til they catch me. And haven’t had much luck with that so far.”

He smiled at her simply for a moment until he frowned suddenly and added, “That, by the way, is the part you can’t tell anyone about. D’ya know how many aspiring little Society bastards are gonna come after me if they knew a tagged bullet to the head would give them the highest title in the whole organization?” He grimaced in disgust. “It’s bad enough with just Dez. Not a word.”

Leta was simply gaping at him. Any second now, he figured, she’d have a whole slew of questions for him — particularly about her fiance. It always went back to that with her, didn’t it? She’d demand more about how to use this to get to him. She’d want to know more about where he was, see the plans for the prison ships, get any and all information possible until she could order Fiearius to sail out there right now and rescue him.

But to his surprise, what she said was, “Why’re you telling me this?”

Fiearius blinked at her slowly, finding himself shocked and, undoubtedly, confused. “I don’t know,” he admitted after a moment. It was perhaps the most sensitive information he’d been keeping and he’d just spilled the whole lot of it to Leta without even second-guessing himself. Why had he told her this?

Accusingly, he held up the whiskey bottle, nearly emptied now, and glared at it. “I must be drunk,” he concluded at last. “Or just stupid.” He eyed Leta carefully in his peripheral. Somehow, as stupid as it was, he wasn’t struck by any particular feeling that he’d done the wrong thing. His gut genuinely didn’t seem to believe that Leta knowing his most well-protected secret would change anything. She wouldn’t do anything with it. She wouldn’t breathe a word of it. It was safe with her, he somehow knew. After today, after…well, everything, he could trust her with at least that.

“Well regardless,” he said suddenly, “you know now.” He looked down at his hands and then laughed, “Figures a doctor would get it all out, huh? Why I’m here and,” he laughed again, bitterly, “why I’m crazy. Don’t even think about making a study out of this, by the way or perhaps I’ll go nuts on you too.”

Leta frowned, surveying him closely. “Do you want my professional opinion?”

“Not really,” he admitted.

“You’re not nuts,” she said, plowing forward as usual. “You just have triggers. And Ludo found one of them.”

Fiearius sighed heavily. “Yeah, I suppose he did.” He glanced over at her and his face softened. “Well, thanks for getting me outta there. And patching up my messes.” He lifted his bandaged arm to look it over. “Literal and figurative…” he muttered. “How many times have you saved my sorry ass now?” He chuckled grimly, but met her eyes with a serious stare as he finally confessed, “Pretty sure I’d be dead by now if you hadn’t shown up. So — thanks.”

Leta’s lips twitched toward a smile as she muttered, “Anytime.” For someone who always demanded his recognition and gratitude, this time, she simply shrugged one shoulder.

It was then he noticed the thin cut in Leta’s cheekbone. A fresh line of blood ran through it, catching his eye at once. “Ah shit, kiddo,” he muttered, reaching out to wipe the drop away with his thumb. “You okay?”

He realized a second too late that he’d startled her: her shoulders went tense and rigid. But she did not, as he would have expected next, pull away.

“Wh — no, I’m fine,” she dismissed, her voice quieting. He knew he was supposed to, but he didn’t withdraw his hand from gently holding the smooth angle of her face. To his amazement, she only continued to gaze at him in a muted kind of alarm, but he swore he felt her soften against his hand.

It was a precarious moment, as if time had halted. Fiearius was certain there was no right move here, but he couldn’t help it — he met her eyes, and then his gaze lowered. He could have counted every freckle on her face. It was then a voice broke over the room.

It was Cyrus. He stopped short in the doorway, looking startled. Fiearius felt Leta slide away discreetly and his hand dropped.

“Are you okay?” asked Cyrus, clearly noticing the layer of bruises on his face. But then his eyes darted toward Leta with a hint of suspicion, and he ventured, “Is everything — alright?”

“Everything’s fine,” said Leta hastily before he could answer. She pushed herself down from the bench and was not, he noticed, meeting anyone’s eye as she started to put medical supplies back on the counter. “Everything’s fine — “

Fiearius had never seen Leta look so flustered before. It was an odd sight: she kept her back turned to them and closed all the cabinets in quick succession. Tearing his eyes away, he forced a grin at his brother. “C’mon, Cy. I’ve been more beat up than this before.”

“He just needs rest,” Leta assured him, pulling her bag off the counter and turning toward the door. She passed Cyrus a watered-down smile, bid him goodnight, and slipped past him toward the hallway, a definite note of urgency in her step.

“Er — goodnight,” said Cyrus blankly, although she’d already disappeared. Silence blanketed the infirmary for a moment until Cyrus turned back toward Fiearius and arched an eyebrow in suspicion. “What the hell was that about?” 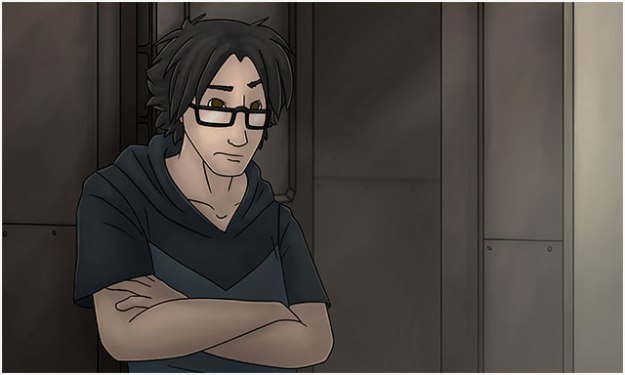