His feet carried him through the hallways of the ship, although Fiearius couldn’t recall making the decision to do so. He thought of nothing, his mind was nowhere. He was almost convinced that he was actually asleep and just moving through some dark, lingering dream. It occurred to him dimly that he needed to set a course, to find a next stop for the ship, but even that felt like a momentous task. After all, when they were aimless like this, the first person Fiearius consulted was Aiden.

The walk to the bridge felt miles long. Each step was exhausting, practically painful, but there was something welcome about the pain: he felt he deserved every ounce of it.

But before he could sink into his chair, he stopped in the doorway of the bridge, snapped out of his stupor.

Suddenly, Leta was inside the cabin, lingering there like a ghost. She was slanted against the dashboard, her hands braced at the counter behind her. Her round eyes were set evenly on him; clearly, she’d been awaiting his arrival.

Fiearius had never wanted company less in his life. She was going to bother him now? Really? Now, of all times?

“What?” he grunted, narrowing his eyes to a glare.

Leta’s forehead scrunched, as if she was curious, like she wanted to know that answer herself. “I don’t know,” she stated quietly.

Dread reared up inside him, and Fiearius suddenly knew why she was here. Leta was reasonable; she knew who really killed Aiden. She knew, more than anyone, that he should have addressed his crew days sooner. That he should have smoothed the situation over before it came to such a violent ending. She knew that it was his failure to act that had caused that little shit to fire that shot. And when had she ever spared him her scolding opinion before?

But then, something odd happened. As if it were the most natural act imaginable, Leta gently pushed herself off the dashboard, closed the distance between them and wrapped her arms around his shoulders.

It happened so smoothly that Fiearius couldn’t anticipate it: one second they were miles apart, the next moment, she was embracing him, a warm weight against his chest. He stared blankly over her head at the blinking controls, his arms hanging uselessly at his sides. But somehow Leta hugged him closer, her mouth and nose pressing against his shoulder.

“Fiear, I hope you don’t blame yourself for this,” she said quietly in his ear. In his blank shock, it took Fiearius a moment to realize what she even said, and then she continued, “Because it isn’t your fault.”

She was wrong, of course, but Fiearius could think of nothing to say; no one spoke to him like this. No one dared. Not for many years anyway. Abruptly, he tensed. He considered stepping to the side. Anything to stop this before she could say more.

But she didn’t move. If anything, Leta tightened her forearms across his back and went on softly, “I really think you did the right thing with Javier, letting him stay aboard. He’s really suffering right now. And I know you are too.” She paused and exhaled a trembling breath; he could feel it ruffle his hair. “I’m really going to miss Aid.”

It sounded like she might cry. So that’s what this was about? Not blame, after all, but a common loss, a common pain. Maybe she wasn’t here just for him. Maybe she was here for her too. At last, he lifted his arms, winding them around her waist.

When Leta spoke again, it was with a fierce kind of determination; she wasn’t crying. “Well, you don’t have to go through this alone,” she said hastily, and Fiearius wondered where this — all of this — could possibly be coming from, considering she had disrespected his leadership or at least disrespected him from the moment she stepped aboard.

But somehow, when she hugged him a second longer and then eased away gently, he felt the knot in his chest unravel slightly.

Breathing a shaky sigh, she held his shoulders and stepped back. “One last thing. There’s a note on the dashboard. From — from Aiden,” she said. “I think you should read it.”

She slid her hands off his shoulders slowly and left through the door. Fiearius watched her leave and stood there numbly for a moment, until his eyes found the discarded paper on the dashboard. He recognized Aiden’s neat, slanted writing as he read:

This isn’t an easy letter to write, and I’m sure you understandably expected different news. However, at this time, I cannot rightfully accept the teaching position you so generously offered to me.

As it turns out, and probably you will find this particularly amusing, I’m not yet ready to deboard the Dionysian. The ship’s become something of a home to me. I’m sure you understand, open-minded as you are. 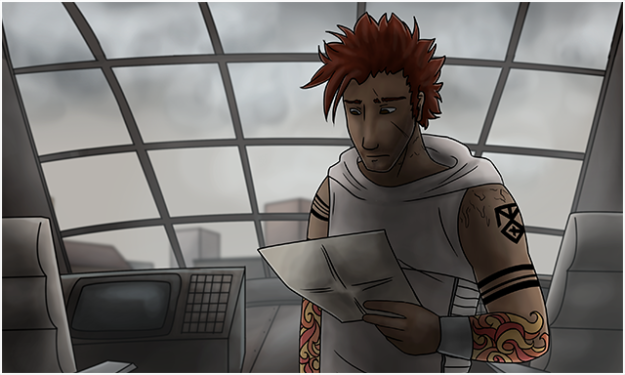