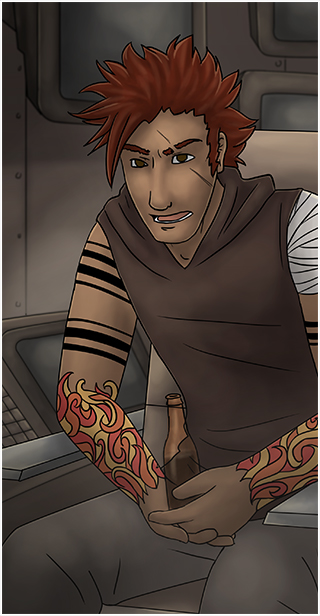 A heavy sigh passed through his lungs as Fiearius put his forehead in his hands, frowning down at the floor beneath him. “I wanna help her, I do,” he admitted impatiently. “But it’s not that easy. There’s no way on or off of that damn ship without it being a suicide mission. At least, not that I’ve found yet.” He looked over at Aiden wearily. “So what do I tell her? It’s hopeless? Go find someone else? Someone else who’ll either say the same or promise the opposite and get her killed anyway? Tell her to just wait until I can figure something out? Yeah, because that’s a satisfying answer when your boyfriend’s being brutally interrogated…”

“We tell her the truth, is what we tell her. That you can’t risk your ship and crew, that it’s simply not possible for you.” He spoke firmly, his voice steadier than water; he made it sound so easy. “And from there, it’s her decision how she’d like to proceed.”

“But it is possible,” Fiearius said at once, the words jumping out of his throat. “It has to be. I can do it. I just…need to figure out how. How to do it without risking my ship and my crew…”

“If you think there is a way,” posed Aiden evenly.

“There has to be,” Fiearius insisted fiercely. “Nothing’s impossible.”

Aiden did not argue, but what he said was worse than any argument. A horrible sense of pity came to his eyes when he said quietly, “I just want to be sure you’re doing this for the right reasons.”

Fiearius felt himself go still in his chair. It was seconds before he responded. “Is there such thing as a wrong reason for this?” he asked slowly.

“Yes.” Aiden sounded positively certain; to him, this was fact. “I don’t think you should feel obligated to help Leta because of your own history.”

Fiearius’ stomach turned over. Hesitant to hear the answer, for he was fairly certain he knew it, he nonetheless ventured, “What history?”

Aiden heaved a sigh, his eyebrows lifting in apology. “With your wife, Fiearius. I don’t think you should help Leta with her fiance because you lost your wife.”

His stomach lurched again, more painfully this time. His eyes were fixed on the dashboard, his voice cold, when he finally answered, “The doctor and her fiance have nothing to do with me and Aela.”

The words hung in the air bitterly. Fiearius was certain Aiden did not believe him, but he did not press it, either.

“Alright,” he said at last. “And if you think it can be done, then we’ll put together a plan.”

“Yes,” Fiearius agreed through a sigh, slumping back in his chair tiredly. “Just add it to the list. Add it all to the list. Right behind ‘stop being broke.’”

“As much as we can, I think we should keep the crew informed from here on out. Right now I’m afraid we have a boat of unhappy passengers who want to know what the next step is.”

“Ah good, then we’ll have something to relate to one another about,” Fiearius muttered, rolling his eyes. “If they wanted timeliness and flight plans, they should have taken a cruise liner.”

“Probably should have, yes,” Aiden laughed. “But since they did not … I’m having trouble keeping animosity at bay. There’s a sense of — hmm … I don’t know what it is, exactly. Maya made her unhappiness well-known to me; she thinks all ship plans are being bent to fit Leta.”

“What?” Fiearius demanded, incredulous. “Where the hell’s she getting that idea from?”

“Well, I think word must have spread that you told Leta you would help her. Maya didn’t take that well … since we’ve been remarkably off-schedule since Leta came aboard. Not that I blame Leta for that — but some people do.” Aiden shook his head. “Ludo, for example; he wants work. And Alistair and Palia — the married couple,” he clarified quickly, knowing full well that Fiearius did not remember petty details like names, “they’ve been aboard three weeks longer than they anticipated.”

“Okay, for one,” Fiearius began tensely, finding all of this information neither interesting nor worth his time, “We’re always off schedule. Because we don’t have a schedule. We do what needs to be done when it needs to be done, doctor or no doctor, and Maya should know that by now. Two, Ludo would have more work if he stopped pissing me off every time I give him work. And three.” Here, he paused, trying to recollect who this married couple was exactly and where they were headed. Failing, he said again, “Three, they shoulda taken a cruise liner,” and shrugged.

A wry smirk spread over Aiden’s face. “I’ll let them know you said so,” he said, and for a moment it almost felt like things were normal. Almost.

This conversation had somehow turned into a conversation Fiearius and Aiden had had many times before. Aiden would inform him of the goings-on of the crew. Fiearius would groan and put it off. Aiden would take care of it. That was how things worked and they had been working that way ever since Aiden came aboard. But it was difficult to forget how they’d come to be sitting in the bridge having this discussion to begin with: Aiden wouldn’t be aboard much longer.

“How do you possibly expect me to handle all these whiny people on my own?” Fiearius despaired, overly dramatic as he dropped his head in his hands. But as theatrical as his woe was, there was a note of truth to it. How would he handle the crew without Aiden? Fiearius wasn’t exactly the definition of a people person and he certainly would never be described as patient or understanding or wise or helpful or really any of the words someone might use to describe Aiden. That was why he liked Aiden so much. And why everyone did.

Just then, the pounding of intent, purposeful footsteps approached, interrupting his thoughts. Fiearius glanced up and saw Leta was in the doorway, and of course she was. Generally the crew avoided the command deck, but not Leta. She had no reservations at all about storming up here and making demands every other day.

In this moment, thought and determination clouded her face, a bad sign indeed. Fiearius reached for his beer instinctively as she breathed, “Hey — sorry, am I interrupting?”

At once Fiearius barked, “What do you think?” just as Aiden said, “No, of course not.”