Traze made sure it was not. The man was practically giddy when he shouted, “– and now let’s meet — our challengers!” and threw his hand toward the opposite end of the ring. Operating on a slight delay, Fiearius slowly followed the line of where he pointed to see what he meant.

Not one man, but three of them, were pushed into the ring opposite him. Three. Three of them. One was tall and skinny, bearing the cropped ear of an ally; another was thick as a tree trunk with the facial tattoo of a local gang; and finally, behind them both, a burly, round man who had the scowl of a large, angry tiger.

“The most even match we could conjure for the Red Fury! “ cried Traze as Fiearius did nothing but stand there, staring dumbfounded. “But will even these skilled combatants have a chance against his rage?!”

Swaying to the side, Fiearius found it wasn’t alarm he felt. In his heavy exhaustion, he had no room for a charged emotion like that. It was strange, but he actually felt a touch impressed by what was being handed to him. Traze really could draw a crowd and make a fortune. He’d be worth far more to the proprietor when he lost …

Squinting his eyes, Fiearius tilted his head as he glimpsed a strange blur of movement in the center of the ring, and that movement was advancing closer. Was the fight starting? Already? Wasn’t there supposed to be a bell or signal of some kind? How else would he know? Although, come to think of it, the crowd was bellowing even louder than before …

That alarm he’d been lacking started to reach him now, circling and circling and finally landing upon him. He blinked his eyes and focused his unsteady gaze and suddenly, not a second too soon, swung his arms sharply like a club at the nearest assailant.

Knuckles made contact with teeth and with a surprising crack, the man stumbled backwards. Shrill screams rang from the crowd and for a moment Fiearius thought maybe this fight wasn’t as lopsided as he’d imagined. He staggered back, shocked at himself. Hell, maybe he actually could win this thing —

In a rush, white-hot pain clenched his stomach and all the breath flooded out of his lungs: the tall one, in a flash, had dug his fist into his abdomen, making him double over. Gasping for breath, Fiearius flung a leg sideways, bashing a knee.

These men must’ve made a pact, realized Fiearius, as he stumbled further backwards and they closed in like predators. A pact to kill him first. Well good for them, he thought lightly as a forearm closed around his neck, pulling him back, making him wheeze for air. Good for them, but not so great for him. He, who was about to be put down …

His neck was wrenched back as fists drove into his stomach. Coughing, Fiearius swung his head down, feeling the rusty tang of blood in his mouth, and just when he was wondering how the hell he was going to wriggle his way out of this one–

Suddenly, breath rushed into his lungs, sweeter than life. But why had they stopped? The lock around his neck loosened, the men were frozen and shocked, and Fiearius picked up his head to see what it was that was making the crowd gasp and stir like ants all around them.

He was hallucinating. Surely. There was no other explanation as to why he glimpsed the faces of his crew in the fray. Although why could the rest of the men see them, too?

Before Fiearius could even begin to unwind this mystery, the man who had him by the neck decided the show wasn’t over after all. Grasping Fiearius’ throat with renewed vigor, he pulled him back and before Fiearius could slip away, slammed his head against the metal bar of the ring.

Pain shot clear through Fiearius’ head and then, at once, he saw nothing: it was as if the floodlights in the ring were put out. His vision went black, his knees caved below him and with a thud of unsteady limbs, he hit the ground.

Sprawled on his back in the dirt, eyelids twitching, he felt consciousness flit in and out of his mind. His head was heavier than a boulder and every part of him ached with exhaustion. When he managed to squint his eyes, his vision swam; he saw only blurry, blown-out shapes …

And then he saw a mirage leaning over him. A very feminine, very attractive mirage with glowing skin and bright leaf-green eyes.

Was he dead? He had to be dead. Although, he doubted his personal afterlife would include anything as heavenly as this …

A lazy, satisfied grin started to spread over his face, but suddenly, that vision of feminine light and splendor started to — of all godsdamn things — slap his face.

It was Leta. The angelic vision dissolved at once and he blinked her into focus, groaning in disappointment. Crouched over him, Leta was searching over his face worriedly, wincing in apology.

“Sorry it took so long,” she muttered, touching her fingers to the bloody cut in his hairline. Too tired to swat her hand away, he simply groaned in protest. “Meant to get you out of here before you got your ass beaten,” she added, to which he grunted.

“What are you talking about?” His voice was a tired mumble. “I’m a perfect image of victory.”

With that, a grin unfurled over her face. “C’mon,” she laughed. “Get up. You need to see this.”

With some difficulty, Fiearius pushed himself up to his elbows. Leta gripped his forearm and steadied him to his feet. And then he looked around them and saw how, exactly, she got here.

His mouth fell open. He knew his loyal crew had a capacity for mania, but he’d never seen anything quite as explosive as this. They were like caged animals, finally let out of the zoo to stampede. The basement was a sea of chaos, yells and gunfire as the crew took over, chasing Traze and his people toward the doors.

Rhys, Maya, Ludo and the two deckhands were running around, yelling happily and shooting bullets into the ceiling, sending patrons into a craze; Cyrus was hovering outside of the ring, looking torn between anxiety and relief; Corra was near him, guns out; Aiden wound through the room casually, looking around in thought as if he were inside a museum. And Traze — he just glimpsed Traze turn and dash out of the back door, looking thunderstruck. 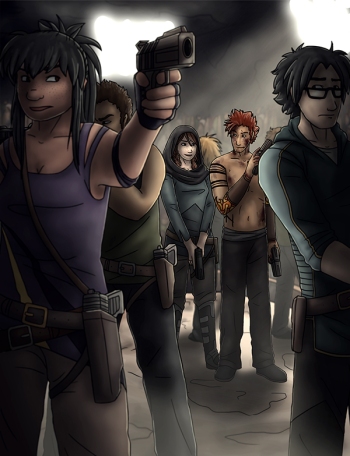 Fiearius wasn’t sure he’d ever seen something quite as beautiful as this scene. He felt dizzy with pride as Leta untied his hands, officially freeing him. “Dov’ha tiar’te,” he sighed in awe, “I love you guys.”

At his side, he felt Leta grinning. “Didn’t think we’d just leave you here, did you?” she said, looking up and holding out a handgun for him. The weapon glinted in the light, and he took it, closing his hand around the grip. Leta lifted her eyebrows.

“You look really awful, by the way.”

“Yeah? Well you look….” He eyed her, and realized he recognized the hood she wore over her head. “Is this mine?” he demanded, flicking the fabric with two fingers. “I know we were in a cell together and all, but I didn’t think we were in ‘borrowing one another’s clothes’ territory.”

“Yeah, well, I’m keeping it,” said Leta waspishly, adjusting the hood fondly with one hand. “Consider it payment for saving your ass. Again.”

Fiearius barked a short laugh. “You say that as if I’ve never saved yours.” He tried to glare, but it faded toward exhaustion. Instead, he clasped her shoulder and shook it roughly. “I’m calling us even.”

They exchanged an exhausted smirk before he turned to enjoy the view of his rabid, roaring crew as they rampaged through the basement.

Cyrus had never liked crowds. In this moment, he hated them for getting between him and his injured brother. People pushed and jostled past him, knocking into his shoulders. But even in his frustration, he had to admit the impossible: this half-assed plan was working.

He’d had never seen the crew act quite like this. Maybe they really didn’t get enough fresh air. If there was ever a reason to get the lot of them riled up and heavily armed though, rescuing the captain seemed as good of one as any.

And thank the gods, they’d done it, they had provided enough of a distraction. Fiearius was fine, or at least he was alive. Cyrus stopped on the edge of the ring, watching as Leta helped him to his feet and brushed dirt off his back. So he wouldn’t have to captain the ship alone after all, he thought as relief washed over him, powerful enough to make him his eyes shut in exhaustion.

And then he opened them quickly. Now, he was ready to get the hell out of here.

Turning back to face the crew running around, he yelled, “Hey! Hey!” and waved his arms, but his voice died in the commotion.  Frustrated, dropping his arms, he looked over to Corra standing nearby. She caught his eye and predictably found it much easier to shout —

“Everyone!” she barked, and eyes swung to her as she pointed toward the exit. “Move!”

Certainly not for the first time, it occurred to Cyrus that she would make a much better first-mate than he was.

“Thanks,” he muttered, smirking sheepishly at her as she gestured for him to follow her to the doors.

Around them, the crew finally slowed down and stopped terrorizing. Breathless and laughing and victorious, the group made their way toward the exit. Though perhaps everyone wasn’t ready for the fun to be over, Cyrus noticed, snorting when he saw Leta rolling her eyes and dragging Rhys by the collar of his shirt through the fray.

Hanging back, taking one last look around to ensure they hadn’t left anyone behind, Cyrus eventually did the same, but not before realizing he was now standing alone in front of a crowd of hundreds with nothing but a single pistol in his hand. His exit was understandably hurried.

Moments later, Cyrus reached to open the back door for Corra.

“That went pretty well, huh?” he said with a happy sigh, but then he realized Corra was not listening.