“How’d they die?” she asked quietly.

Cyrus blinked his eyes slowly, as if Leta was barely in focus. “How did they–” he began. “I don’t know. They just…they died. They were dead before I knew they existed. Got shot I think. I don’t know by who. Or why. Or anything really.” It didn’t exactly sound like an honest response, but Leta didn’t press it. After all, this was Cyrus’ sister-in-law and niece or nephew.

“That’s terrible. That must be why he left Satieri then,” she said wondrously. “Or part of why. And explains why he’s so … “

“Look,” Cyrus interrupted, fixing her with a drunken, worried stare. “You really can’t tell anyone about this. Not even Corra.”

Cyrus hesitated, finding something fascinating about the way his fingers looked knotted together in his lap. “If the wrong people find out what happened…” he muttered at last, but before he could finish the thought, he was cut off suddenly by a tiny, but powerful burst of energy barreling into him.

“Alright, I’ve had it,” Corra scolded, steadying herself on Cyrus’ shoulders and barely talking over her laugh. “If you guys are just gonna sit here looking miserable, we’re going somewhere else. You coulda just told me you were bored, y’know.”

“Oh — that’s alright,” said Leta quickly. Her lips twitched toward a wry smile. “Cyrus was keeping me entertained. What now then? Because I could use another strong drink.”

A rather worrisome grin twisted its way onto Corra’s face. “Oh, I have an idea.” 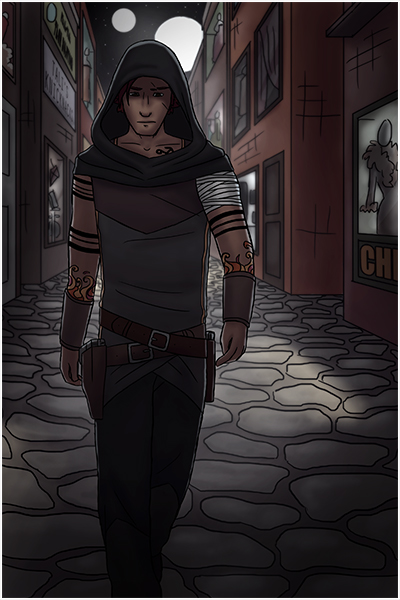 This street of Tarin lay in an odd, ghostly silence, save for a drip-drip from the gutters and his own footsteps on the cobblestone. As he wove through the maze of empty markets, his senses strangely attuned, Fiearius couldn’t help but imagine the figure of Desophyles in every shadow he passed — leaning against every building, or perhaps observing from a high window —  waiting for his moment to strike.

But it didn’t worry him. It should have worried him, but just for the moment he was immune. He was almost tempted to call out Dez’s name and he genuinely expected him to answer. He would see the massive shape of his once friend step into the street and raise a gun to his head and–

But every time his imagination got that far, the gun was suddenly in his own hand and it was not his face he saw gazing into the nozzle. It was the pleading, tear-filled stare of a woman he’d never met about to die.

A shiver ran down his spine, although the evening was a warm one. It didn’t used to affect him like this. It wasn’t the same anymore. Maybe he really was getting too old for this kind of job.

He was just shaking off the thought when he heard the commotion a few streets over. So he wasn’t the only one out in the streets at this hour after all. A bubbly, long laugh cut through the night and he froze. He’d recognize that laugh anywhere: Corra.

The bizarre, complacent state snapped away. Quickly he veered down an alley and made for the source of the noise. Of course she’d disobey his orders and leave the ship. He’d expected that. But to be raising a racket in the middle of town at this hour? She was just asking to get kidnapped or ransomed or worse. Had that girl no sense whatsoever?

As he rounded the corner into the town square which was practically ringing with laughter now, he quickly found she was not alone and realized he should have expected that too. In the center of the square, at the base of the tremendous, circular fountain lounged not just Corra, but his brother and the doctor with her. Wasted. All of them.

Taken by frustration, Fiearius marched across the square towards them, his brow creased in anger. “You do realize,” he snapped when he was close enough, “that I can hear your sorry asses three streets over.”

Cyrus was the first to notice him. He sat on the ground, slumped against the fountain. He picked up his head and gasped, shocked to be caught, the same guilt in his eyes he’d had when he’d stolen and wrecked Fiearius’ favorite toy spaceship when he was a child. It was Corra who spoke first, quite excitedly at that.

“Cap’n!” said Corra, swinging Leta’s legs off her lap and jumping to feet. “You made it!” she cried happily. Below her,  laying horizontal and sprawled over the edge of the fountain, Leta raised her head and grimaced at him, clapping a hand over her eyes.

“Good to see you too,” Fiearius muttered to her, before turning back to Corra, the obvious ringleader of all this. “I suppose I don’t need to point out that this is basically exactly what I asked you lot not to do.”

Corra stuck out her tongue with a mighty ‘pfft’ and clapped her hands on her hips in defiance. Sounding accusing, she started, “Well I suppose I won’t point out that you don’t follow the orders that are given in the … pointing to you…usually,” and then she trailed off, quite lamely.

“She’s right,” Cyrus added seriously, coming to her defense at once. “You don’t always do the pointing.”

As dangerous and stupid as it was for them to be out here, acting like this, especially after the day’s events, Fiearius was finding it difficult to be angry with a group of people too drunk to put together coherent sentences. Nothing he said would sink in anyway, and clearly, Dez, for whatever reason, wasn’t interested in rounding up Fiearius’ intoxicated crew. Too predictable of a move, perhaps?

They deserved a good lecture, of course, but right now, it would have been a waste of effort. “Alright, enough with the pointing,” he grumbled. “Up. All of you. Back to the ship.” He jutted his thumb over his shoulder.

The three of them groaned, like he’d just told them recess was cancelled.

Nonetheless, Corra lowered herself down from the wall. She let her whole torso hang despairingly as she dragged her feet a few steps forward. “Why you gotta ruin all things?” she sighed, but before she could get her answer, her foot caught on the edge of a stone and she fell forward, straight into Fiearius, who caught the woman who was hardly tall enough to reach his shoulder. Inwardly, he sighed: the stories of daring spaceship captains he’d heard as a kid had always left out the part about babysitting.

As he righted Corra to her feet, Leta was helping Cyrus, swinging his arm over her shoulders amid painful groans and laughter. At once, Leta staggered under his weight, but not without yelling, at the top of her voice,”We’re fine! I’m — we’re completely fine, it’s fine,” she added, her voice trailing off uncertainly as she hooked her hand around Cyrus’ wrist.

In a sloppy sort of caravan, they started off toward the ship docks. They’d only made it a few feet when Leta arrived at Fiearius’ side and suddenly brandished something in his face with her free hand: it was an emptied liquor bottle. In a sly, proud voice, she informed him, “I stole this.”

Blinking in surprise, Fiearius first regarded the bottle, and then the girl attached to it. His annoyance slowly waning into amusement, he was unable to resist a smirk. “That’s good stuff. Well done. Looks like we might make a criminal of ya yet.”

She snorted a derisive laugh, while swinging the bottle happily in a circle.  “Yeah, that would be a great use of my education. Although I am pretty damn good. I nicked it from behind the bar at this swanky club while Corra distracted the server, and we drank it all together right out here,” she finished with satisfaction, examining the bottle fondly as if she’d found a new friend.

Fiearius couldn’t help but snort a laugh. Apparently the uptight doctor did, infact, know how to have a good time. He peered around her to Cyrus. “I think I like her better like this.”