An hour later, back on the ship, Corra disappeared upstairs while Leta dragged Cyrus to the infirmary. In a heavy silence, he sat on the exam bench as Leta read through the test results on the console screen.

“Blood test came back normal,” she told him, clicking through the data. She didn’t exactly expect him to sound thrilled at this news. In fact, he looked quite miserable, back slumped, his eyes on the floor. “Everything else too. Except for a little dehydration — so finish that water, please — “ she added, nodding toward the glass sitting by him, “you’ll be completely fine.” She turned away from the screen to get a better look at her patient. “Looks like you’ll live to fight another day after all.”

“Yeah,” he muttered dryly. Then he glanced sideways at her. “Thanks, by the way. For saving me, I mean.”

Leta crossed her arms over her chest, watching him closely even as he went back to avoiding her eyes. “You’re welcome. We should probably thank Corra, actually,” she remarked. “She’s the reason we both made it out of there. And to think, she almost didn’t go with us at all … “

Cyrus blanched, and then went on,  “Yeah, and…” He inhaled sharply, as if he’d truly been dreading saying, “You were right. To call it off. It was stupid. The whole idea was stupid. I don’t know why I agreed to do it to begin with.”

Leta found it was rather difficult to be angry with someone who nearly choked to death before her eyes only a few hours ago. And besides that, he looked like he wanted nothing more than to sink into the floor and disappear. Feeling her heart soften in spite of it all, Leta shook her head. “Yeah … I know,” she murmured. “It’s okay.” After a moment , she asked, not unkindly, “Why did you agree to do the job?” 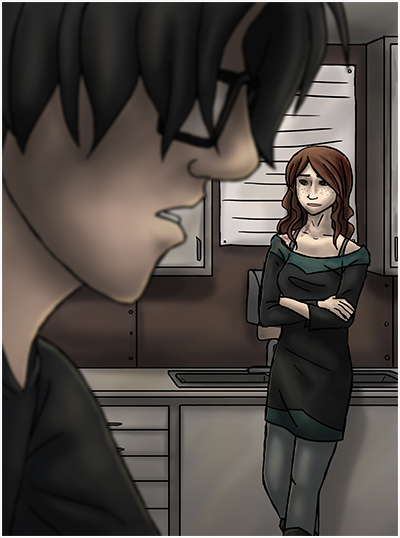 The look Cyrus gave her was practically hopeless. “I don’t know,” he confessed pleadingly. “I just…I wanted to help. With Fiear down and the ship..a mess. I’m supposed to be the first mate, vice captain, if you will. Not that anyone believes I should be. I guess I just wanted to prove them wrong. That I could take care of this ship if something happens to him.” He dove a hand through his messy hair. “But I guess I can’t. He woulda done it. Without a second thought. And we’d be way better off than we are now. But me?” He dropped his hand to his knee, helpless. “Not me. I should just stick to fixing the engine…”

“So I’m guessing the deal didn’t go that well then.”

It was Fiearius. Suddenly, he was leaning in the doorway, his shoulder against the frame, arms crossed. Possibly Leta’s look of disgust was obvious, because he eyed her for a moment before focusing his attention on his brother, who had gone pale.

Here we go, thought Leta darkly, crossing her arms tighter as if bracing for the storm.

“So, what happened?” Fiearius asked, his voice eerily calm.

“Exactly what you said,” Cyrus admitted quietly, every word heavy with guilt. “It didn’t go well.”

Fiearius’ head tilted as he regarded his brother. “You okay?” he asked, a genuine note of concern in his voice.

Apparently willing to accept that answer, Fiearius took a sharp intake of breath and muttered, “Strange. Never had a problem with her before.”

At this, Cyrus twitched and finally looked up at him. “Her?” he repeated bitterly. “Her.”

Confused, Fiearius glanced at Leta as though she could explain this. “Yeah?” he ventured carefully.

Cyrus groaned and shook his head, exasperated. “You wanna know what really happened?” he asked harshly. “That happened.” When his sibling showed no hint of understanding, he pressed on irritably, “The only direction you gave was ‘you know who to go to’. Apparently I didn’t though because when I went to see him, he tried to kill me.”

Leta didn’t know what she expected from Fiearius — yelling, at the very least — but to her surprise, the man drew his brow together in something like concern. “Shit, Cy, where’d you go?” he asked wonderingly.

“To Grice,” Cyrus replied instantly, faking cheer. “Because I’ve never met ‘her’. Or even heard of ‘her’. Who the hell is ‘her’?”

But Fiearius wasn’t interested in answering his question so much as condemning his choice. “Grice?!” he repeated incredulously, dropping his arms in surprise. “You went to Grice?!” His hand came to his forehead in frustration. “Dov’ha ti’arté, no wonder he tried to kill you.”

“Well, you, actually,” Cyrus corrected sourly. “I don’t think he was planning on me…Do I even want to know why he was trying to poison you?”

Fiearius sighed heavily and shook his head. “Either because our good friends back on Kadolyne are offering a great deal of money for the man — ” he glanced at Leta, “ — and woman who killed Goddora. Or…” He hesitated for a moment before lifting his shoulders in a shrug. “Or because I fucked him over six months back. Or both. Probably both.”

Leta (who had been doing quite well, she thought, keeping a respectful silence), could no longer stand it.

“That’s why this happened?!” she demanded, catching the brothers by surprise. “Cyrus almost died because you forgot to tell him about Grice?!”

Fiearius looked at her, startled by the interruption. “Don’t blame me for this, he said he understood,” he defended, before looking back to Cyrus. “You said that. I remember. I asked if you knew what I meant, and you said yes.”

“Of course I said yes,” Cyrus went on in despair. “I thought I did! Grice was the only option I could think of, I assumed he had to be the right one. How was I supposed to know I was wrong?”

Leta couldn’t help but roll her eyes to the ceiling. “Idiots,” she groaned. “The both of you, complete idiots.”