Cyrus, with a feeling of apprehension, recognized that burning look in Leta’s gaze. It reminded him exactly of his brother when he was fired up. Which usually meant something bad was about to happen.

And their logic was sound. Too sound. If he felt hopeless before, now he was utterly trapped. They were right, both of them. This whole thing was wrong. The place, the man, the goods, all of it was just one mistake after another. And with both Corra and Leta looking at him like they were looking at him right now? There was no way he could go through with this. Gods, why was he even here? How could he have ever agreed to do this?

“Well,” Corra began hesitantly, “I don’t know that we have much of a choice now…” She eyed the gang leader and his posse carefully. “Doubt he’ll be that happy if you change your mind all of a sudden.”

Cyrus glanced toward the glinting rifles in their hands. Could nothing ever be easy? How the hell anyone put up with all these ridiculous criminals and their trigger-happy tendencies, he would never know. What happened to the days when he was able to settle disputes with a few harsh words and then a pointed avoidance around the office for the next few weeks?

“Any ideas?” he mumbled hopefully.

After a strained, heavy pause, Leta suddenly looked up from the floor. “Actually, yes. I’ll do the talking,” she said, which was a phrase Cyrus had never once found comforting.

She turned and walked back to the bar. One of Grice’s men was leaning over to speak in his ear, clearly discussing the situation. They both looked unpleasantly over to Leta.

Leta, however, had focused her attention back on the crate. She opened its lid and looked over the neat rows of vials, bottles and bandages it held curiously.

“Dropbox donation, right?” she asked calmly, to which Grice and his men laughed.

“’Course it is. Docs love to send their charity ‘round here.”

Finally, after another moment of studying the supplies, Leta shut the crate with a snap and looked up. “This isn’t it. This isn’t the medicine we need.”

At once, confusion and anger flashed in Grice’s eyes, and he slammed down his mug. “What do you fucking mean ‘this isn’t — ”

Catching on, Cyrus hurried forward. “You heard her,” he told the man harshly. “It’s not what we need. Are you trying to pull one over on me?” At Grice’s curled lip and furrowed brow, Cyrus instantly regretted the accusation. Quickly, he back-pedaled, “Or was I unclear in my message? Whatever the reason.” He lifted his chin and stood tall as he declared, “This won’t work. The deal’s off.”

“Off? Off?” he repeated gruffly. “You set up the meeting, you wasted our fuckin’ time — ”

“Well we won’t waste any more of it,” said Leta. In the corner of his eye, Cyrus saw her wrist trembling ever so slightly at her side, but her voice was quite steady.

Which was only a small comfort. This was it, he thought, brushing his hand back toward his hip where his gun was holstered. Any second now Grice was going to gesture for his men to slaughter them all and riddle the bar with bullets. Any second he was —

But to Cyrus’ shock, Grice did nothing of the sort. In fact, after regarding Leta for another tense moment, the gang leader looked away, downed the rest of his beer, pushed himself to his feet and spat, “You’re goddamn lucky I’m in a good mood.”

He glared furiously, and, taking care to shove Cyrus’ shoulder on his way out, strode to the door. His gunhands followed after, leaving the three of them — and the silent, watching bartender — alone in the room.

For several seconds, no one spoke. No one moved.

Finally, Corra muttered bitterly, “That was disappointing.” She loosened the grip on her gun, crestfallen. “I was rather looking forward to shooting somebody…”

Cyrus, lacking Corra’s current craving for blood, was less disappointed and far more perplexed. Grice had seemed angry, but there was no retribution? That wasn’t usually how these things worked. ‘A little pissed off’ usually ended up with someone dead. So why was he still standing there, fully intact?

“I don’t understand…” he muttered. Feeling wrong-footed, he slumped back onto the barstool. Leta joined him, lowering to her seat and looking just as perplexed.

“At least we’re not dead?” Cyrus suggested, grimacing. “I dunno, might as well be for how much I’m gonna get slammed when we get back to the ship. Coming back with nothing at all. No better off than we were before.” With that in mind, he reached for the tankard sitting in front of him.

“But you stood up for something,” Corra pointed out. “The cap’n would never do that.”

“Exactly,” Cyrus muttered. “And to hell if he’ll understand why I did…”  If only to give himself something to do, he took a drink from the glass in his hands, rather defeatedly.

The next moment, Cyrus felt it: a burning in his mouth, then a choking fire in his throat and lungs. The tankard thudded out of his hand, spilling a river of liquid across the bar and Leta’s lap.

The last thing he saw was Leta’s look of horror, her voice growing distant in his ears as she yelled, “Cyrus! Your drink — don’t — !” before he slid from the stool and his vision went black. 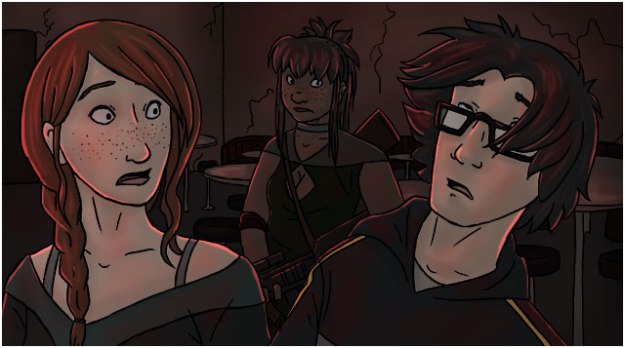