Corra didn’t breathe as the Dionysian began its ascent. She couldn’t swallow as the ship violently rocked and shook and fought its way up through the sky. She had to look away as they passed through the clouds, the empty thin layer of nothing, the fiery atmosphere and finally emerged into the cold black of space. As the ship calmed from its violent seizure into the sweet stillness of the vacuum, Corra could hold nothing back. The tears flowed forth and she wept.

For minutes, there was nothing in the bridge but the sound of her sorrow until she heard, very faintly, “I’m sorry.” Hesitantly and barely able to lift her head, Corra looked up at Fiearius, hardly daring to believe it.

“I’m so sorry,” he said again as he stared straight ahead into space beyond the window. “I couldn’t do it.” Her tears slowed and her sniffles weakened. Fiearius Soliveré was actually apologizing to her? It didn’t change anything. It didn’t solve it. But it was a step.

“We can still go back,” she murmured, laying a hand on his arm. “We can turn the ship around. We can go back. We can help them.” The desperation in her voice was apparent. “Please…”

At her touch, Fiearius suddenly looked down at her and for the first time, she saw just how horrified he looked. Horrified and…off. Confused. “I’m sorry,” he said again, sounding desperate himself. “I should have listened to you. We could have left. I was just–I didn’t—I couldn’t.”

Suddenly, he reached over and seized her wrist. Corra came to her feet and took a cautious step back, but his hold was strong and she couldn’t break free. She did, however, get the very distinct feeling that despite his eyes being fixed upon hers, Fiearius was no longer speaking to her.

“I couldn’t do it,” he pleaded again. “It was my fault. Everything. All of it. If I had just done what you said–” He brought his other hand to his temple and clutched it viciously as though trying to rip something out of it.

Corra had almost thought it was funny the other day when she’d caught Fiearius talking to himself about some feverish nonsense. Funny not in the way he was rather terribly sick and possibly dying, but funny at least in what he was saying. Now, however, she wasn’t laughing. “Cap’n…” she said again, worried now.

Thank the gods, then, that she didn’t have to do this alone. Corra was relieved to see that the doctor arrived in the doorway, out of breath but ready, a knapsack of med supplies in her hand. “All right,” said Leta, her eyes on Fiearius, “how is — “

“If I didn’t hesitate,” Fiearius went on, as if he were in the middle of a concerned conversation with the wall, “if I’d just done it. I’m sorry I didn’t read your message. I’m sorry. I just…I don’t know.”

“Corra,” she remarked quietly, “who’s he talking to?”

Corra looked up at her, her concern drying her eyes. “I–I don’t know,” she stammered. “He’s just…” She looked down at the broken man attached to her hand and frowned. “Talking nonsense.”

“It’s not nonsense!” Fiearius snapped,  pulling her by the wrist closer to him. “I would do anything for you. You know that. Anything. Except…I couldn’t let him kill him. I had to do it. I didn’t have a choice.”

Corra knew it was just fever talking, she couldn’t help herself. Her curiosity was unbearable. “What are you talking about?” she asked quietly. “Couldn’t let who kill who? You had to do what?”

“I had to shoot him,” he replied shortly, looking up at her with his brow furrowed. “I couldn’t save you. I had to save him.”

Perplexed and strangely fascinated, Corra opened her mouth to ask more, but she was cut off.

“Corra,” Cyrus barked sharply at as he stormed into the bridge, causing the now even more confused young woman to almost jump at the sound of her name. “Get out of the way. Let Leta do her thing.” Corra nodded slowly and drew her hand away.

As she retreated to the back of the room, Leta came forward and dropped to her knees, pulling out a collection of needles and bottles from her bag.

Seeming not to notice his doctor, Fiearius’ eyes grew distant with longing toward the wall. Cyrus took one moment to grimace down at him and say softly, “That’s not her,” much to the confusion of the two other people in the room. Corra and Leta exchanged glances, but Cyrus pressed on quickly.

“How fast do you think you can get him back to normal?” he said. “At least coherent would be acceptable,” he added. “We just shot part of the engine with that takeoff and we’re running dangerously low on our fuel reserves. And I’m guessing we didn’t get paid for that one, right?”

“No,” said Leta, now pressing a cloth to Fiearius’ arm, “we didn’t get paid. Torian was there waiting; Solon double-crossed us. Double-crossed Fiearius, I mean.”

Corra watched from the sidelines as Leta cleaned and dressed the wound and began to put together a needle. As she worked, Fiearius’ eyes looked emptily over her head until he finally noticed Leta. As though she would understand this more than anyone else in the room could, he informed her, his voice too calm and haunting, “You can’t fix it. You can’t bring back the dead.”

His words brought Leta to pause. She halted in the middle of filling a shot, provided him a startled look, before hastily recovering. Whatever he’d meant by that, it clearly disturbed their doctor.

“I’m not,” she said, too forcefully. “I’m not. I’m — going to give you something for the fever; it’ll put you to sleep,” she finished quietly, and finally administered a needle to his shoulder.

It took only seconds for the patient in the room to quiet. Fiearius’ feverish nonsense faded as his eyes fell closed and his head slumped back in the chair.

Slowly, Leta stood up to her feet. Her expression was darkened. “He’ll be asleep for hours. Then, he needs rest. Actual rest. He shouldn’t lift a spoon tomorrow, let alone fly a ship.”

The bridge lapsed into solemn, expectant silence. Leta was standing there numbly, her brow knit, looking ghastly pale and rather lost. Corra was fairly certain she knew what  they were all thinking. The captain was unconscious. They had no plan, no next-step. They were out of money and very nearly out of fuel. And Solon Goddora was dead. One of the most powerful traders in the span. Dead at the hands of the man in the pilot’s seat. His ghost would be back to haunt them. That was for sure. Finally, she found the nerve to speak.

“Now what?” she wondered quietly from her place by the wall.

Cyrus heaved a long sigh. “Now?” he repeated, looking between the two of them and back down at his unconscious brother. “Now, we leave.” 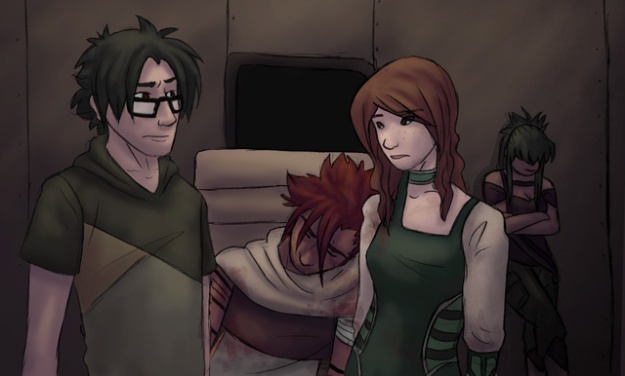