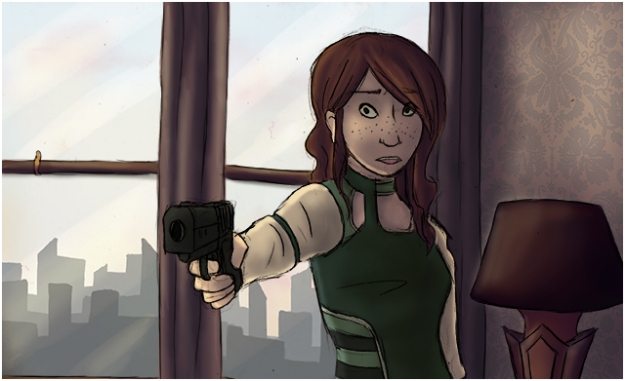 Two fiery-metallic bangs blasted through the small room, one gunshot after the other.  The first came from Fiearius’ gun: he finally silenced Goddora’s sputtering pleas once and for all.

The second shot came from Leta. She saw the gun out there in her hand, but could not believe what she’d done with it.

Before her eyes, the figure of Saviano went rigid. Then, his knees buckled, and with a thud, his body hit the floor. Blood spread over the carpet, more blood than Leta had ever seen, and the crimson liquid crawled toward her feet. Still clutching the weapon, she hazarded a step toward the sprawl of limbs on the floor. Of course he was dead, he had to be dead. But she had to see for herself.

But yes, he was dead; she’d killed him. She’d killed him to protect Fiearius, a man she hardly knew and barely trusted. Leta slowly lowered the gun back to her side and looked up at him. Her whole body was humming with shock at the dawning realization: now there were three dead bodies in the room.

All she could do was raise her eyebrows at Fiearius quizzically.

Fiearius stood over a corpse of his own, staring down at Saviano and looking just as shocked as Leta felt, for several long, empty seconds. Finally, something seemed to click in his head and he looked up, the tiniest of perplexed frowns on his face. Then he sighed.

“Well…” Shrugging off the weight of the recent killing spree as though it were something as simple as an awkward conversation over dinner, he muttered, “That didn’t quite go as planned.”

The second the words left his mouth, noise exploded beyond the door of the room: the pounding of oncoming footsteps, the metallic sounds of a dozen guns being cocked and readied.

As he glanced toward the door, Fiearius’ frown deepened. “Alright. Time to go,” he said conversationally, almost to himself, as he suddenly crossed the room. In one motion he grabbed for the wooden dresser at the wall, dragged it over the carpet and shoved it against the door.

Then he turned back into the room and scanned it critically. As the footsteps pounded closer from beyond the door, Fiearius’ eyes fell to each object until, at last, they settled across the room.

Leta followed his line of vision and felt her stomach turn over. It was the window he was looking at so avidly, the window that allowed a glimpse of the top spires of buildings, clouds, and sky outside. Certainly, the window was nowhere near the ground.

“Find anything with a bit of length and tie it together,” he ordered sharply, marching forward and sliding up the glass pane to look down at the street below. What he saw put a grimace on his face as he looked back at Leta and added, “Check all the drawers and the closets. Anything that might be useful. Gonna need as much as we can get.”

Leta’s senses, acting on a bit of a delay, were beginning to return to her. She swore she could smell the blood of the men on the floor, but she dared not look again. Her cold, numb shock was wearing off and now she felt adrenaline when she realized why he needed the window.

“We’re four floors up,” she breathed.

“Better four than five,” Fiearius said distractedly as he edged past her and suddenly ripped the sheets away from the man on the bed.

Leta flinched, but still did not move from her spot as Fiearius dodged back to the window, knotting the bedsheets together and finally crouching down to tie them to the leg of Roman’s bed. Leta watched, perplexed, as he took a step back and examined his make-shift rope to — presumably — lower them out the window. Did he really think that would work?

He did, apparently, as he muttered, “This end should stick together well enough. Climb down what you can. Jump from there. I’ll catch you.” He suddenly beamed at her. “Unless I’m dead. In which case, sorry. I tried.”

With that, he seized the edge of the mattress and yanked it out from under the patient. As Roman groaned and rolled ungracefully onto the metal springs beneath, Fiearius dragged the mattress and his subsequent train of bedsheets behind him to the window as if he were dutifully working on a science fair project and not crafting a death-trap.

With a swing of his arms, he tossed the mattress out the window; Leta thought she could hear it thump when it hit the ground.

With that, she blinked. “Wh — you fucking better catch me,” she warned. “I don’t like heigh–”

But Fiearius just took one last look at the room and, seeming to remember something, suddenly muttered, “Sorry,” before turning around, aiming his gun and firing a shot directly into the head of the man on the bed.