For moments longer, as she concentrated on preparing the syringe, Leta was quiet. As far as kidnappings went, this was about as tame as she could imagine. Fiearius didn’t care if she stepped off the ship in two days. And now, with what he’d said about the Society, she wasn’t sure if she would.

It had been a long time since she’d had an ally.

Once the shot snapped in place, Leta merely looked up, murmured, “I guess we’ll see then, huh?” and stuck the needle sharply into his arm. Perhaps a bit sharper than necessary. 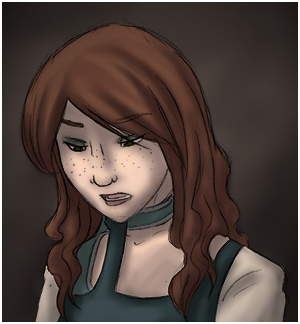 At once, Fiearius flinched and grumbled some unintelligible curse at her, though she withdrew the needle without a word. In the corner of her eye, then, she noticed movement near the door.

The figure of Cyrus tentatively sidled up where it waited in the shadow of the hallway, hands clasped nervously behind his back. Once Fiearius had recovered from his antibiotics, he followed Leta’s line of vision and looked over at the door frame expectantly.

It was apparently all the cue Cyrus needed.

“We’re on course,” he said. His eyes were on his brother. “I did some rigging that should scatter our signal. We’ll be way out of range by the time they manage to sort through even half of it,” he explained, his voice cold and professional as he stepped deeper into the room. “I’m still gonna push her through the night just in case though. We should be in orbit morning after next. Little ahead of schedule.”

“That’s fine,” Fiearius replied briskly, an answer that made Cyrus visibly twitch with frustration. Leta, meanwhile, chose to say nothing as she carefully disassembled the syringe in her hands. Unapologetically curious, she glanced back and forth between the pair.

Looking uneasy, Cyrus glanced at her, then to his brother’s arm and finally asked, “So, how’s…” His finger indiscriminately waved towards them. “That?”

“Fine,” Fiearius said again, watching the referenced arm curiously as he shrugged. It must not have felt quite as fine as he claimed, however, as the action caused him to wince ever so slightly. “It’ll be fine,” he amended, casting a pointed look at Leta. “By the time we land. It’ll be fine.”

Another silence unfolded, interrupted only by the clank of metal as Leta dropped the syringe back into the cart, and kept unfolding.

“Well, if you’re done,” said Fiearius abruptly “I’ve things to do. Places to be. People to harass.” He grinned maniacally before adding, “Sleep to catch up on…” Rolling his eyes tiredly, he pushed himself from the edge of the bed and made his way towards the door. On the very threshold, however, Cyrus stopped him.

“Fiear,” he interjected suddenly, catching both his brother and Leta by surprise. She looked up just in time to see the elder sibling pause and the two of them stand there in the doorway, staring at one another, neither speaking a word.

Leta wondered if this was finally about to escalate into shouting. But they said nothing, and she had to wonder what possibly could have been passing between them. Finally, Cyrus said, quietly,  “I’m sorry. I didn’t know where else to land.”

To Leta’s immeasurable surprise, the captain did not snap. He did not retort. He smiled more kindly than seemed possible for him and said softly, “It’s okay, little brother.” He rested a hand on his sibling’s shoulder before sauntering past him out the door and disappearing into the shadowy depths of the ship.

As the footsteps on the metal grating died away, Leta stood there a moment longer, nearly forgetting Cyrus’ presence until he heaved a sigh. Gradually, he brought his eyes back to Leta and, here, his brow creased.

“I owe you an apology too,” he began. “A few, actually. And some gratitude.” He glanced hesitantly over his shoulder in the direction Fiearius had gone. “I’m sure he’s not the easiest patient to put up with. But thank you. I wish there was some way I could repay you, but…” His face twisted into a grimace. “We’re about as broke as we’ve ever been. And I don’t think we’ll ever be going back to Vescent in my lifetime, so I can’t exactly offer to take you home.” The grimace faded into a weak, sheepish smile. “I’m afraid you’re a bit stuck here for now. But I promise, I’ll try and make this up to you. Probably not today. And probably not tomorrow. But somehow. Somehow, I’ll fix this.”

Did he expect her, Leta wondered, to scream and cry? As any true kidnapped victim would? Truthfully, that had seemed like a strong possibility before. But it was no longer. Now, as she regarded the young man across the room — he looked strikingly earnest — she was feeling something quite foreign and different; it took her a moment to place the feeling.

Hope. That’s what it was.

“WeIl, I think I might believe you,” said Leta finally. She backed up a step, and edged herself onto the patient’s bed. “And since I’m going to be here a little longer than I thought — I should explain a few things.” 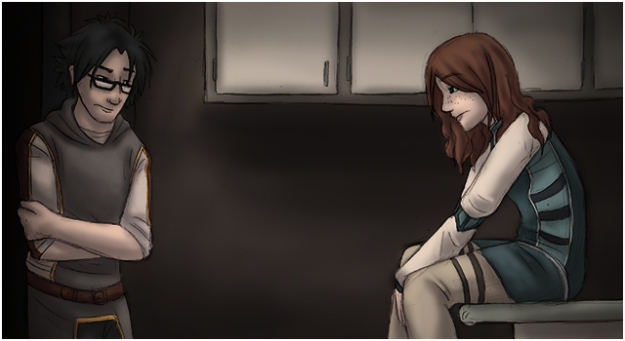